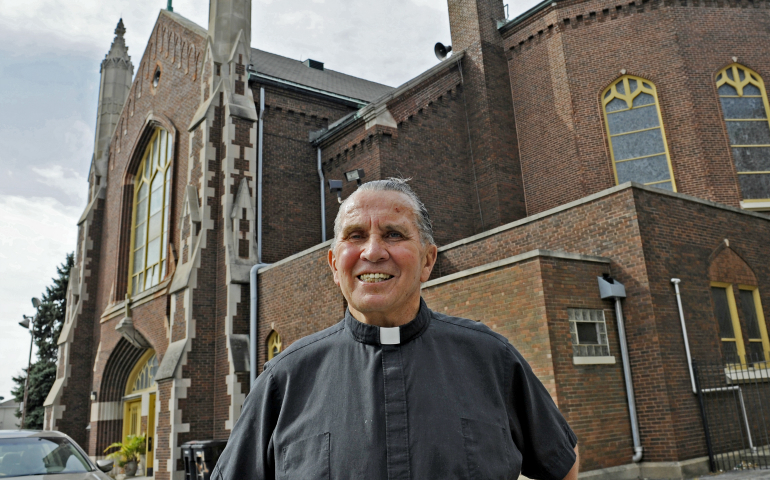 Pat Reardon was set to replace Fr. Daniel Mallette as assistant pastor of St. Agatha on April 5, 1968, the day after Martin Luther King Jr. was killed. Pat was driving down the Eisenhower Expressway in Chicago and could hardly see for the smoke. "I could smell it through the closed windows," he told me. "The West Side of Chicago was on fire."

A tank blocked the entrance to the rectory. Two members of the National Guard sat behind a machine gun on top. "They let me in and wouldn't let me out."

The next days and weeks, Pat walked the streets. "Everywhere I went, people asked about Fa' Mallette. It seemed like everyone everywhere knew and loved him. I took his place but never replaced him. Nobody could."

Mallette — legendary Chicago street priest, voice of the poor, troublemaker and activist for peace, a "living saint" to those he served — will never be replaced now. He died March 27 at age 85. He lived 60 of those years as a priest.

Mallette was ordained at St. Mary of the Lake Seminary May 3, 1957. He made his first bones at St. Agatha from 1957 to 1968. It was a black parish with loyal Catholics who worked hard to hold things together and lived in a part of town that was dangerous. The Saturday Evening Post ran a feature story about Dan that brought his street ministry to national attention. Local politicians tried to co-opt his charisma, but Dan would have nothing to do with it. "I'd rather be with the people on 26th and California," he said.

I was in the seminary then and volunteered to work on a census at St. Agatha during the summer. One night before going home, Dan asked me to stick around and join him and some other priests in the rectory for some beer and snacks. There I was hanging out with Dan and his pal Fr. George Clements, soon to be the first black pastor of Holy Angels Parish on the South Side, and Fr. Jack Egan, the godfather of all inner-city priests. I wanted to be like them.

So did Dick Morrisroe, who was two years ahead of me. "I was in deacon year," Dick told me. "My fate was to go to a white parish in a north side suburb and play golf on Wednesdays. I volunteered to intern at Agatha's for 10 days. When I got back I wrote a letter to the cardinal [Albert Meyer*, archbishop of Chicago], asking him to assign me to a black parish. Dan inspired me. He went to my ordination. It was an honor."

Dick got a black parish and later joined Mallette, Clements and Egan and other Chicago priests who marched with King from Selma to Montgomery, Alabama, in March 1965. In August, Dick was to go with Dan and George for a brief vacation in New York. He returned to Selma instead. On Aug. 14, a rogue deputy with a shotgun blasted him in the back. Dick almost died. Dan, beside himself, called him in the hospital. "What's the matter with you? You're supposed to be in New York with me and George!"

When Dick got out of the hospital, Dan brought him to St. Agatha's rectory to recuperate and saw to it that all his needs were met for the next six months.

Fr. Ozzie (Owen) McAteer, who also did the Montgomery March, had come to Agatha's the year before. Dan knew of his good work at another parish and asked Ozzie to join him in a new team ministry at Agatha's. Dan told him, "We're going to make Christ present on the West Side. Christ is already here. All we have to do is make him known."

Ozzie was not the first to get pumped up by Dan's enthusiasm for service in the name of Jesus. He joined Dan and others in demonstrations for school integration, but missed out on spending several nights in jail with Dan, James Farmer and Dick Gregory for messing up the view of Buckingham Fountain with their signs.

Dan was also getting a rep for helping disadvantaged kids get into colleges. In 1968, Fordham University invited him to New York to become assistant dean for minority recruitment. Chicago Cardinal John Cody gave his blessing, and Dan was off to the Big Apple. Little did they know that a mighty wind from Chicago had just come their way.

In January 1969, I arrived in New York City for a leave of absence before choosing to leave the priesthood and marry. I had moved into a dump that smelled of stale cheese to trap mice and began searching for a job in publishing, when I got a call from Dan. I went to see him at his pad on the Lincoln Center campus. Dan was a wiry guy with a crewcut that flew off in every direction like it was trying to escape his brain. He wore a white T-shirt and blue jeans, a Pall Mall cigarette burning between his fingers. Kids came in and out of his room, sharing good news or just to say hello to "Father Dan."

We began to hang out. I remember walking with him up and down 125th Street, that great boulevard of black history, past the speaker's corner on Seventh Avenue where Malcolm X had preached to passersby, the Apollo Theater where Billie Holiday had sung and "Bojangles" had danced, the Hotel Theresa where Muhammad Ali stayed before fights. Every few yards on that crowded street, somebody would yell, "Father Dan! Father Dan!" He had been in this city of 7 million people for less than a year!

He took me to a barbecue ribs joint where the owner seated us by the window and we slopped down the juiciest ribs I ever ate, all for free. Dan would have owned New York City's heart had Cody not called him back in 1971.

Cody had heard that Dan was driving a cab on weekends. He told Dan that he didn't want to get a phone call that one of his priests was killed. Dan did it because he admired the French worker priests and wanted to see what it was like.

Dan went back home because he loved being a parish priest, but things weren't the same. He wrestled with a drinking problem. He joined Alcoholics Anonymous and became its cheerleader for 40 years. He never hesitated to talk about his alcoholism, even in the pulpit, because he wanted people to know that it was OK to be human and that Jesus was always there.

Dan became pastor of St. Margaret of Scotland Church in 1977 and served there the rest of his life, beloved by parishioners and by all the families all over Chicago he never stopped helping. Dan loved to celebrate the Eucharist and did so every day. His dog, Tuffy, sat beside the altar. He heard confessions before daily Mass. He visited prisoners on a regular basis.

Clements told me, "Dan visited more people in hospitals and nursing homes than any priest I've ever known, and I've known him since we were 13."

Fr. Tom Millea, another street priest, visited Dan's bathroom one day and noticed a tattered holy card taped to the mirror: Dan's ordination card, with the words of the Morning Offering.

In 2011, two burglars busted into the rectory and brutally beat Dan while he was sleeping in his bed. One of them struck his face again and again with a holy water sprinkler and said, "I'm sorry, Fa'. Pray for us." Dan escaped death. He forgave the robbers. You could not help but think of Jesus being flogged by those he lived to save, but Dan was never the same.

When Cardinal Francis George, archbishop of Chicago from 1997 to 2014, tried to cajole him into a nursing home in his final years, parishioners set Mallette up in a ranch house and saw to it that all his needs were met. Dan said Mass for visitors until the last weeks of life.

In March, when Dan was in intensive care in Little Company of Mary Hospital, his friend Fr. John Smyth went to visit him. "There must have been 25 visitors in the IC," John said. "The hallway had more than a hundred. Old people, gang members, street kids. I asked them why they were here. 'He's my father,' they told me. 'He's helped me my whole life.' 'We're here for Fa' now.' "

More than 2,000 people attended Dan's funeral at St. Mary of Scotland April 1. Clements presided. Priests who have been around a long time said it was the biggest crowd at a priest's funeral they had ever seen.

[Michael Leach (class of '66) is publisher emeritus of Orbis Books and author, most recently, of Positively Catholic. He also edits the Soul Seeing column for NCR.]

*This name of the cardinal has been corrected from an earlier version of this article.