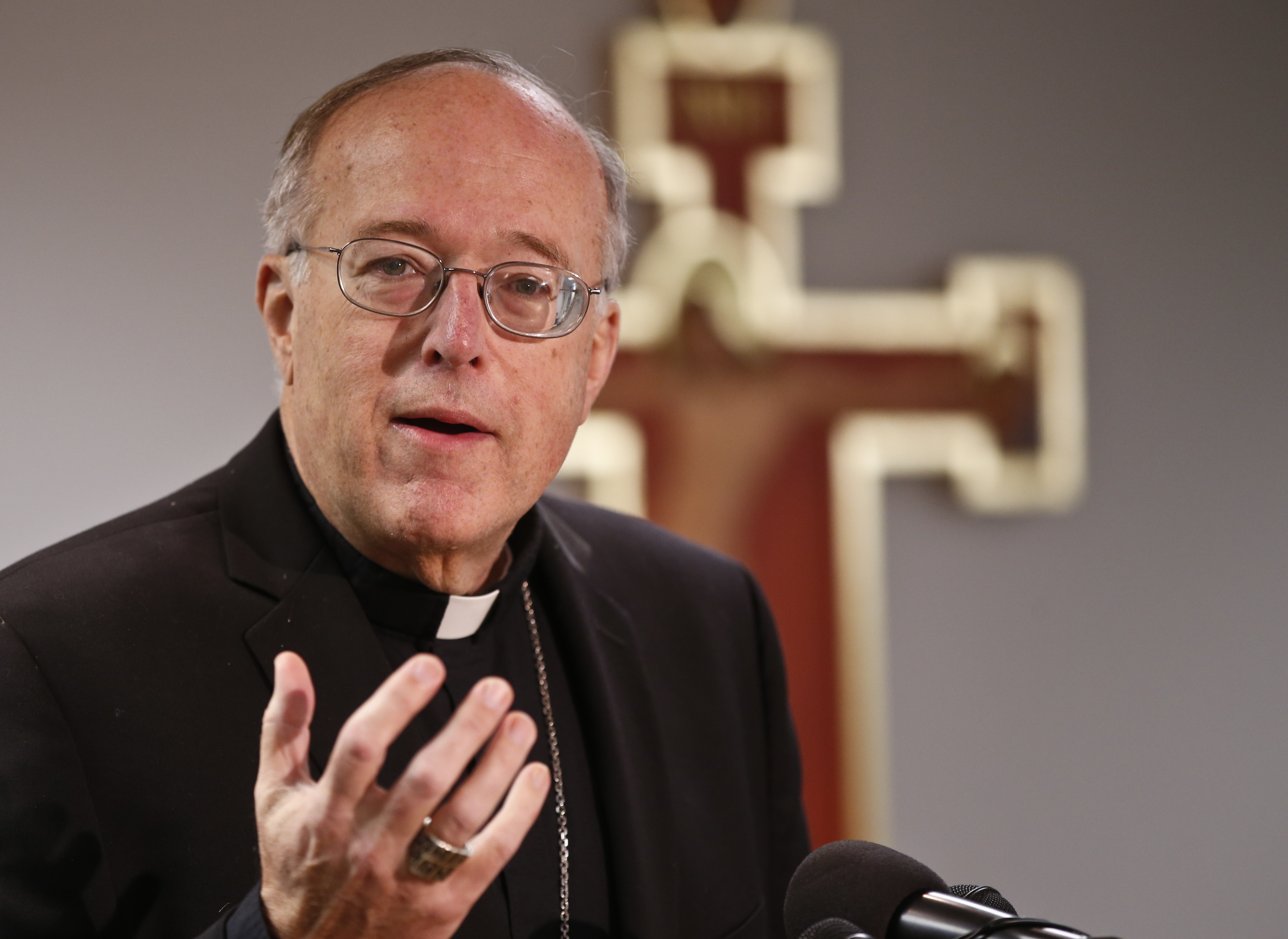 Acting on Pope Francis' wish for a more "synodal" church at all levels and keying on five major themes of the pope’s recent exhortation, Amoris Laetitia, San Diego Bishop Robert McElroy announced Wednesday that he will convene a diocesan synod in October focused on marriage and family life.

McElroy's approach leans heavily on the attitudes expressed in Amoris Laetitia, or "The Joy of Love," in which the highest ideals of the Catholic view of marriage are tempered with the realities of contemporary life and the everyday challenges faced by married couples. McElroy's pastoral message, in that regard, acknowledges some of the most daunting challenges facing the church in relating to millennials and incorporating them into the life of the church.

On the thorny issue of divorced and remarried Catholics, McElroy embraces Francis' elevation of an ancient foundational church teaching, that of discernment of conscience in determining an individual’s level of participation in the church, that has been somewhat de-emphasized in recent history. Francis, says McElroy, "widens the focus of this internal reflection of conscience."

"For some time, I have been discussing with the Presbyteral Council, the Deans of the diocese, and lay pastoral leadership about how best to respond to Pope Francis' call to renew marriage and family life in our local church," McElroy writes in a pastoral message titled "Embracing the Joy of Love."

A diocesan synod, he says, provides "a promising pathway" to considering the topics.

In his pastoral message (embedded below), which appears in the diocesan newspaper, The Southern Cross, McElroy outlines five major areas for discussion:

The bishop addresses each of the areas as it relates to the pope's exhortation and each section ends with a list of questions to be considered.

In an interview prior to releasing the document, McElroy told NCR he hoped that the synod process would result in an action agenda for each of the sections and that any follow-up to the synod would be overseen by a structure involving clergy and laypeople that could be sustained over a long period.

Most of the heavy lifting -- "brainstorming and distillation" of ideas -- will be done by five groups over the months leading up to the two-day synod, scheduled for Oct. 28-29 at the diocesan pastoral center. Those two days, says McElroy, will constitute the deliberative portion of the process, when the whole body will discuss documents produced by the five discussion groups and make decisions about what to adopt and accept as action items for the future.

"It is my hope," writes McElroy, "that this synod will be a genuine reflection of the Mercy and Compassion of God in this Jubilee Year of Mercy."

The agenda for the synod is framed first by Francis’ nod to both the beauty and the realism inherent in the Catholic view of marriage and family life. The apostolic exhortation "unceasingly points to the reality that the beauty of married love is not confined to an ideal world or exceptional relationships, but is realistic and attainable for most men and women," writes McElroy.

The Catholic vision of marriage, he writes, collides with contemporary culture, where "individualism, consumerism, the notion that all relationships are temporary, distorted notions of freedom, poverty, and narcissism penetrate all layers of society."

That is why, he says, Francis, in "an immensely rich reflection … demonstrates that the beauty of marriage is no less powerful because it will never be fully realized in perfection in this life."

The diminishing number of young adults, those between 20 and 40, participating in the church "constitutes the most significant pastoral challenge to the Church in the United States," writes McElroy. Until the church addresses the problem, "we will not be able to build effectively a strong culture of Catholic marriage."

Another obstacle to young people’s participation in the church, writes McElroy, "is that immense numbers of young Catholic couples who fully intend to marry in the Church live together before their Catholic marriage. Many choose cohabitation as an experimental prelude to marriage, to test compatibility. Others have adopted the increasingly prevalent view in our culture that living together is merely an extension of dating. Still other couples have married civilly with the intention of having a Church wedding when they can afford a bigger celebration."

Undocumented couples in San Diego are also "trapped in the limbo of their legal status," fearful that being formally married would lead to deportation, he writes.

Poverty, unemployment and past debt are also burdens that lead couples to put off formal marriage.

In all of these circumstances, McElroy takes Francis' counsel to view each of the situations "discretely," and to see, even in those arrangements that differ from marriage, "the love, sacrifice and commitment which is reflected in so many of these relationships." To fail to do so "is to ignore the presence of elements of God’s grace in the hearts of these young men and women" that may be leading them to marriage in the church.

McElroy notes Francis' citing of the "law of gradualness," which recognizes that humans achieve moral growth in stages and which "reflects love more than judgment."

Francis, writes McElroy, "repeatedly cites" Jesus' conversation with the Samaritan woman at the well "as a prism through which to construct the church’s outreach to young couples, a prism which embraces them in their humanity and their love, rather than categorizing them as living in sin."

"During the diocesan synod in October, existing rules and practices which are alienating must be examined, and creative new pathways to inviting couples to the full commitment of Catholic married life must be explored," he writes.

One of the more extensive sections deals with providing "authentic pastoral support for those who are divorced." McElroy notes that Francis’ exhortation supports reconciliation in marriages where possible but also recognizes "that there are all too many situations of abuse, selfishness and egregious immaturity where divorce is necessary for the protection of a spouse or of children."

In those cases, McElroy writes, the pope calls for "special tenderness" and says the church "should make every effort to heal the wounds of divorced men and women through the sacraments, catechesis and social outreach."

Divorced Catholics who have not remarried are not precluded in any way from full participation in the life of the church, he writes. But what of those who have married civilly after a divorce?

As a result of discussions at the first Vatican synod on the family in 2014, annulment procedures, which McElroy terms the "optimal step for Catholics who have been divorced and remarried," have been simplified, and San Diego, like all dioceses, has eliminated all fees previously associated with annulments. Consequently, the number of annulment cases in the diocese has doubled.

Still, many divorced and remarried Catholics opt not to seek annulments "for a variety of legitimate reasons -- many of them arising out of caring concern for the effects that an annulment process might have on the feelings of adult children or former spouses."

Because of the complexity of circumstances involved in marriages and children by first and second marriages, writes McElroy, "Pope Francis rejects the validity of any blanket assertion that 'all those in any (second marriage without benefit of annulment) are living in a state of mortal sin and deprived of sanctifying grace.' "

While acknowledging "a deep level of contradiction in the life of Catholics who are divorced and remarried," McElroy understands Francis’s exhortation to mean "that even in the face of substantial contradictions between the Gospel and the existential life of a disciple, the inexorable logic of divine grace seeks ever more progressive reintegration into the full life of the Church."

He quotes the exhortation’s explanation of "two ways of thinking which recur throughout the Church's history: casting off and reinstating."

The pope goes on to say that "from the time of the council of Jerusalem" the way of the church "has always been the way of Jesus, the way of mercy and reinstatement."

Francis, in line with the thinking of the synod, writes McElroy, "locates this way of mercy and reinstatement in the discerning conscience of the believer."

In the past, McElroy writes, the church has used the tradition of "the internal forum of conscience" to answer the question of whether a divorced and remarried Catholic could receive the Eucharist. "But the sole question for discernment in this tradition … revolved around whether one of the essential elements of the Catholic understanding of marriage had been missing at the time of the first marriage."

Francis has widened "the focus for this internal reflection of conscience … by underscoring that the central question for conscience is 'What is my situation before God?' " writes McElroy.

In considering the question, the bishop states, the believer, in conversation with a priest, and with "humility, discretion, and love for the Church and its teachings, seeks to reflect" upon his or her responsibility for the failure of the first marriage, for care of any children of that marriage, and "possible harm which their returning to the sacraments might have by undermining the indissolubility of marriage."

The priest, in this arrangement, accompanies the person, informs the believer on matters of Catholic faith but does not make the decision for the person, writes McElroy, noting that Francis "emphasizes in The Joy of Love, the Church is 'called to form consciences, not replace them.' "

If the question at the heart of the discernment of conscience on the issue is new, the process itself is not, says McElroy: "Pope Francis is not enlisting an element of the Christian moral life which is exceptional. For the realm of conscience is precisely where the Christian disciple is called to discern every important moral decision that he or she makes."

Rules, he writes, play an essential role in imparting the wisdom of the church and in keeping "a firm check on rationalization. But it is in the act of conscience, well-formed and profoundly considered, that the believer is most Christlike in carrying out his moral mission in the world."

McElroy says the synod participants will consist of a layperson from each of the diocese’s 100 parishes as well as the diocese’s priests. Experts in specific disciplines, including theologians from the diocese, will also participate in the discussions leading up to the two-day meeting in October.

EMBRACING THE JOY OF LOVE: A Pastoral Message to the People of the Diocese of San Diego