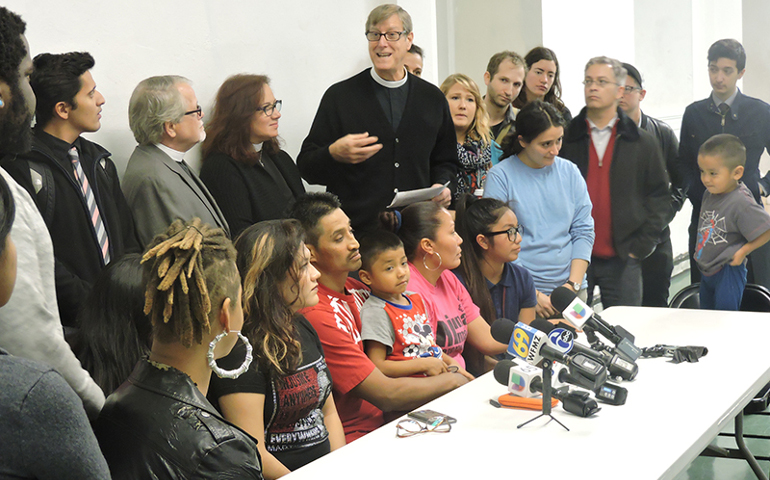 Supporters surround Javier Flores and his family during a press conference in the basement of Arch Street United Methodist Church in Philadelphia on Nov. 15, 2016. The group gathered to announce that Flores has taken asylum in the church. Senior pastor Robin Hynicka stands immediately behind him. (RNS photo by Elizabeth Evans)

First came the mayors of New York, Chicago and Seattle declaring their cities “sanctuaries” and saying they will protect undocumented immigrants from President-elect Donald Trump’s plan to deport them.

Then thousands of students, professors, alumni and others at elite universities including Harvard, Yale and Brown signed petitions asking their schools to protect undocumented students from any executive order.

Now, religious congregations, including churches and synagogues, are declaring themselves “sanctuaries” for immigrants fleeing deportation.

On Nov. 15, an undocumented Mexican and father of three, who says he is determined to stay in the United States for the sake of his children, appeared at a news conference at Arch Street United Methodist Church, where he is seeking sanctuary from deportation by federal authorities.

Javier Flores fled to the church ahead of an order to surrender to U.S. Immigration and Customs Enforcement. The 40-year-old north Philadelphia resident had entered the United States without papers in 1997. Since then, he was deported and re-entered several times.

“Today and every day, if Javier and his family choose to stay with us, they will have a home with us,” said the Rev. Robin Hynicka, senior pastor, at the news conference at his Center City church.

During his campaign, Trump vowed to deport an estimated 11 million foreigners. Since his election victory, he said he would immediately deport 2 to 3 million undocumented immigrants who have been convicted of crimes.

“What we are going to do is get the people that are criminal and have criminal records, gang members, drug dealers, we have a lot of these people, probably 2 million, it could be even 3 million, we are getting them out of our country or we are going to incarcerate,” Trump told "60 Minutes" correspondent Lesley Stahl.

Alongside enforcement of immigration laws, Trump vowed to build a massive wall along the U.S.-Mexico border to keep out immigrants.

In the wake of the elections, there’s been an “outpouring of inquiries and support” from congregations across the country that want to sign on as sanctuary sites, said Peter Pedemonti, executive director of the New Sanctuary Movement of Philadelphia.

“Churches are saying, ‘We want to do this. How do we get started?’” said Pedemonti, whose coalition includes 17 churches and two synagogues that have banded together to oppose deportations and offer their sanctuaries as safe havens.

But just how many faith communities are willing to harbor undocumented immigrants is hard to gauge.

Andersen estimated there are 400 congregations nationwide that support the efforts or are willing to open their doors to people fearing repatriation.

Churches, along with schools and hospitals, are considered “sensitive locations” by Immigration and Customs Enforcement and U.S. Customs and Border Protection. That means federal agents will avoid arresting, searching or interviewing people there under most circumstances.

The sanctuary tradition can be traced back to the Hebrew Bible. The Book of Numbers cites six sanctuary cities throughout biblical Israel where a person who accidentally killed another could take refuge from anyone avenging the killing.

A more contemporary version is the American “sanctuary church” movement of the 1980s, in which hundreds of Central American refugees trying to avoid deportation sought shelter in churches.

But it's far from clear how big a role houses of worship will play in harboring undocumented immigrants in today's political climate.

President-elect Trump won 81 percent of white evangelical voters. While some evangelical groups such as the Evangelical Immigration Table have championed immigration reform, their efforts have not led to movement on the national level.

The major Hispanic evangelical organizations are socially conservative, opposing abortion and favoring broader religious freedom laws. They have advocated for comprehensive immigration reform but have not joined the sanctuary movement.

“If they feel they need to protect undocumented immigrants, they’re within their biblical and theological right to do so. But the real preference is immigration reform. Sanctuary churches is a response. It’s not the answer.”

About 65 percent of Hispanic voters voted for Hillary Clinton, according to exit poll data; Trump won 29 percent of their vote.

“What we have been seeking is a true change in the system,” said Tony Suarez, who serves on Trump's Evangelical Executive Advisory Board. “All this is a result of a broken system.”

He said the advisory board has been meeting with the president-elect or his advisers on a weekly basis and that their immigration policy is “still evolving.” But he added the National Hispanic Christian Leadership Conference will advocate for “justice and mercy” for all undocumented people.

The case of Flores, who has no criminal convictions, shows how difficult it may be for undocumented immigrants to flee to churches.

He is a Catholic, but he sought refuge in a United Methodist Church. Although U.S. Catholic bishops urged Trump to adopt humane policies toward immigrants and refugees earlier this week, not every bishop is likely to advocate for sanctuary churches.

Protestant mainline churches, more liberal Catholic churches and Jewish synagogues however, are expected to join the movement and open their doors to people seeking refuge.