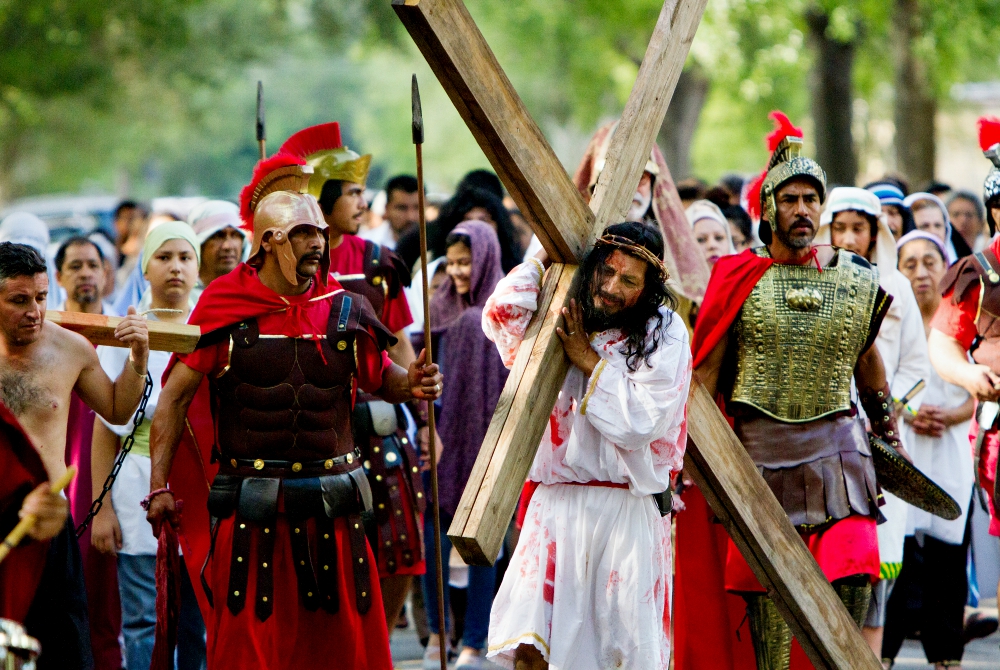 A man portraying Jesus carries a cross down a neighborhood street during a live re-enactment of the Stations of the Cross outside All Saints Catholic Church in Houston on Good Friday, April 14, 2017. (CNS/Catholic Herald/James Ramos)

Nellie Quintana was 10 years old when she went to her first Via Crucis with her mother in Pilsen, a predominantly Latino neighborhood in Chicago's Lower West Side. The dramatic reenactment of the Stations of the Cross through the city streets, with costumes and well-rehearsed actors, resonated with her. Year after year, she kept coming back.

Thirty years later, Quintana is now president of the Pilsen Via Crucis coordinating committee and she is still struck by how the sacred tradition affects the community. For an hour and a half each year, she says, the entire neighborhood is almost completely silent.

"We're all praying in unity," she said. "That's amazing."

This year's Via Crucis will be particularly poignant for one Pilsen mother who lost her 16-year-old son to gun violence just two months ago. Denice Coronel, whose son Erick Alvarez was killed Feb. 10, will portray Mary, Jesus' mother, in the April 19 procession.

The event in Chicago is but one of hundreds, if not thousands, of public settings in which the Way of the Cross is reenacted. That same day, thousands more Catholics and other Christians across the country will participate in similar Good Friday Way of the Cross processions, connecting the dramatic events of Christianity's most solemn day to modern issues facing society.

The annual Pilsen Via Crucis, which is organized jointly by eight churches in the neighborhood, has been drawing families like Quintana's and Coronel's for more than four decades. This year, thousands of spectators from all across the city will watch and follow along what will be the community's 42nd Good Friday procession, the longest continuous running Via Crucis in the Midwest, according to Quintana.

"It's very much about connecting with the suffering and sorrow of Jesus and Mary," said Neomi De Anda, theology professor at the University of Dayton. "It's about accompaniment." 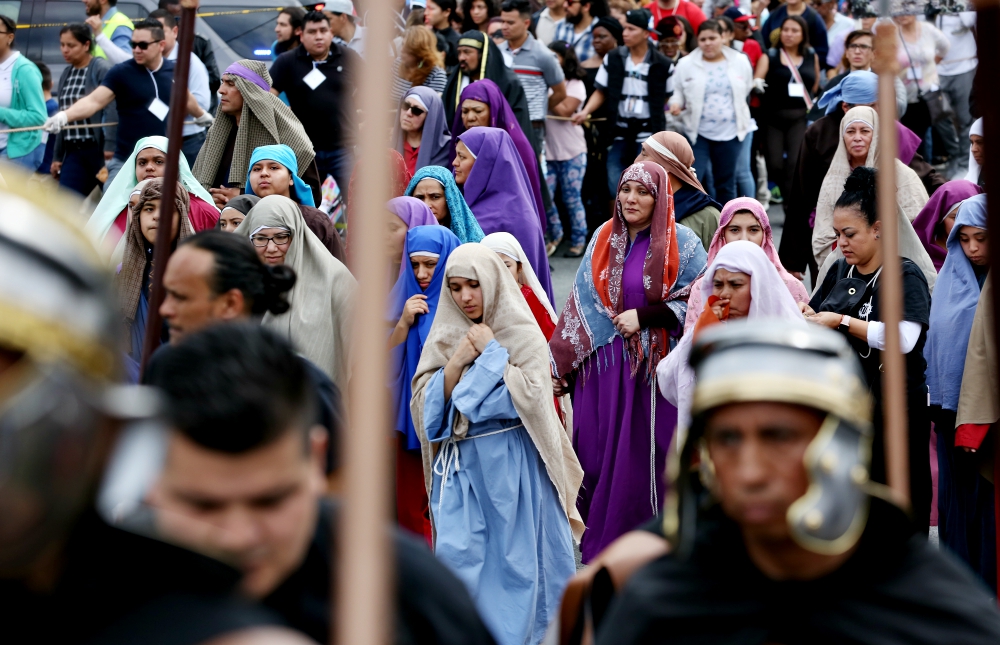 Meet the Pilot robotics team from the Academy of Our Lady of Peace, YouTube video

From New York to San Antonio to San Francisco, participants will accompany each other through major cities in processions as long as 10 miles. This year's participants will be the latest in a long history of laypeople and clergy to relive the events of Good Friday through intricate and intimate public expressions of faith.

Origins of the Stations

The current 14 Stations of the Cross were established by a Franciscan named Leonard of Port Maurice in the 17th century, according to Marianist Fr. Johann Roten, a University of Dayton professor and Marian scholar, in his paper "Way of the Cross History: History of the Sorrowful Way." Throughout his life, Leonard erected more than 570 Stations in Italy during the later 17th and early 18th centuries, promoting the practice's spread into mainstream Christianity.

Today, Catholics around the world continue to walk those same 14 Stations through various ways, personally or as part of a community, each Friday throughout Lent and especially on Good Friday.

According to De Anda, the Latino Via Crucis procession is a tradition that originated in Spain and was passed on to Latin American countries and the United States through the process of colonization. The Via Crucis processions in the United States, which are driven by dramatic live reenactments that many communities like Pilsen prepare all year for, are largely similar to processions still held in Spain each Good Friday.

Beyond Pilsen in Chicago, Hispanic and Latino Catholic communities in San Antonio and El Paso, Texas, Washington, D.C., and elsewhere annually stage elaborate Via Crucis processions around their own local communities. 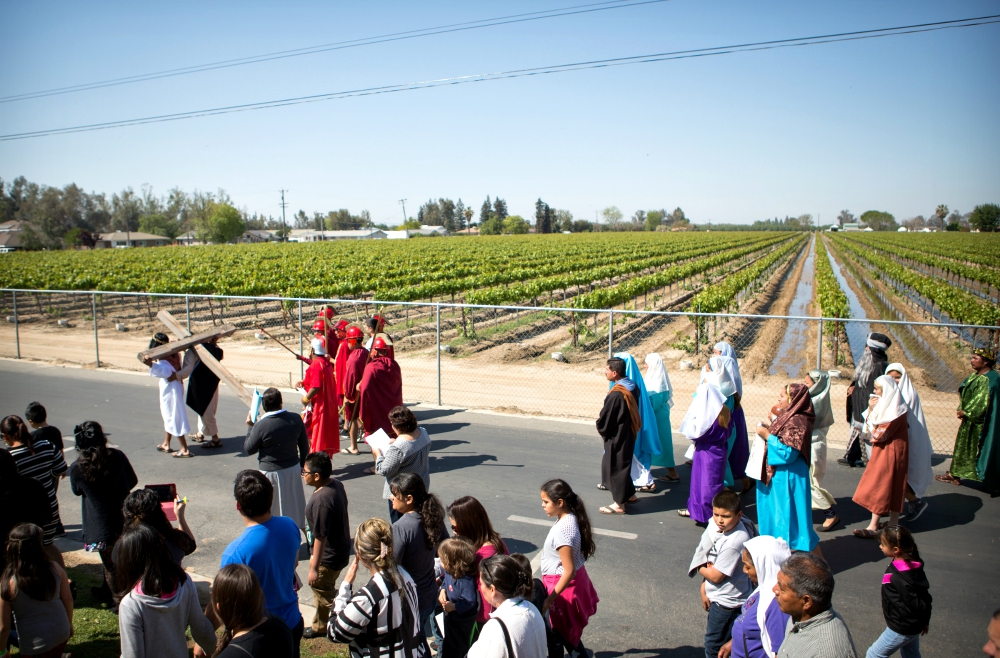 A person carrying a cross leads the Way of the Cross procession on Good Friday in the Diocese of Fresno, California, April 3, 2015. The tradition of a living Stations of the Cross is especially strong in the diocese's migrant communities. (CNS/Catholic Extension/Rich Kalonick)

Other major Good Friday Way of the Cross processions in at least seven major cities — including New York, Chicago, Houston and Washington — will be sponsored by Communion and Liberation, a Catholic lay movement that believes human liberation can only come through living in communion with one another.

Founded in Italy in 1954 by Fr. Luigi Giussani, Communion and Liberation has been hosting public Way of the Cross processions for decades since Giussani first proposed the liturgy to high school and university students in Italy.

According to Beniamino Rovagnati, an organizer for the Communion and Liberation procession in downtown Chicago, the movement's Way of the Cross combines choral music, Gospel passages, reflections and silent procession to "enter more deeply into the events of Good Friday and their meaning for us today."

"We hope that we can experience and witness that Christ is still present today, through the concrete and visible face of his people who follow him and his cross," Rovagnati told NCR.

The largest Communion and Liberation Way of the Cross held in the United States each year takes place in New York City, starting at the Brooklyn Bridge, with prayerful stops at City Hall and Ground Zero along the way. The procession started in 1996 with fewer than 30 people, according to the organizers' website, and last year nearly 3,000 people participated. 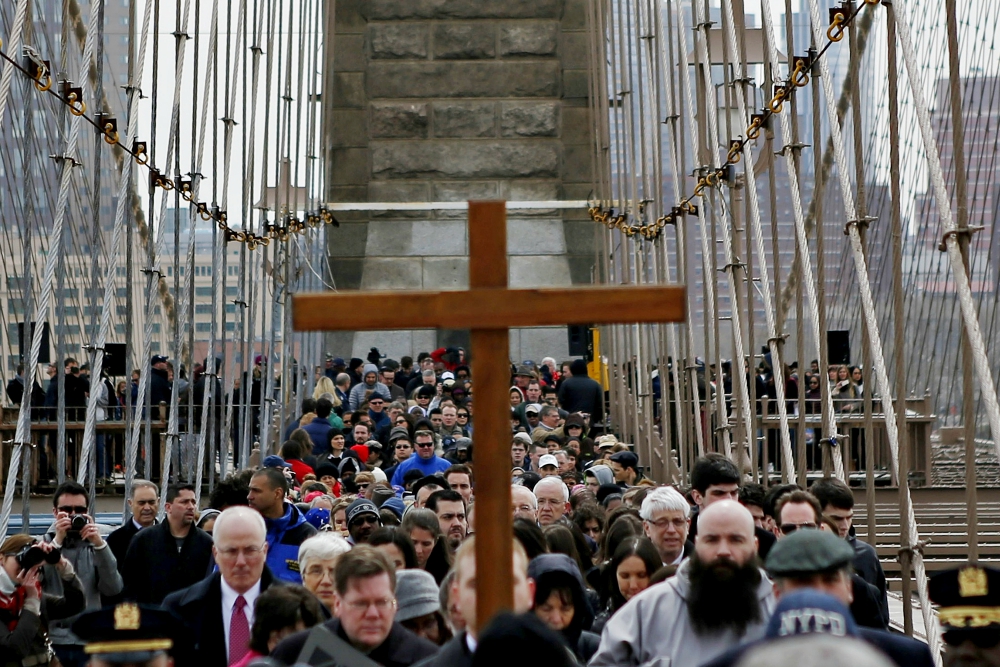 People participate in the Way of the Cross over the Brooklyn Bridge in New York April 18, 2014. (CNS/Reuters/Eduardo Munoz)

Transported to a liminal space

"Ultimately ... ritual and Via Crucis is about pedagogy," said Chris Tirres, DePaul University professor of religious studies. "It's about teaching."

Tirres, who has studied Good Friday rituals at San Fernando Cathedral in San Antonio as part of his book The Aesthetics and Ethics of Faith: A Dialogue Between Liberationist and Pragmatic Thought, said the experience you receive at a Good Friday procession like a Via Crucis largely depends on the theological understanding of the liturgical team planning the event and the choices they make. The specific details the team decides to present go a long way in what participants can take away from the rituals.

Through the chosen movements, actions and symbols, Good Friday rituals convey what Tirres calls "aesthetics of sense and aesthetics of imagination."

The aesthetics of sense are what ignites our senses — the things we see, touch and taste on a visceral level.

The aesthetics of imagination are how rituals like the Via Crucis open up imaginative and theological space for the audience "that allows people to engage with the ritual in ways that they don't engage with other types of experience," Tirres said.

Live reenactments of the Stations of the Cross can transport people observing them to what researchers call a "liminal space," meaning a head space that feels like you are neither in the past nor present but a mix of both, according to Tirres.

This liminal space allows those observing and participating to directly connect the events they are watching to their own experiences in the modern world.

For example, Tirres said that there is a station in the Via Crucis where Jesus falls and the women weep. Whoever writes the prayer for that station has an opportunity to connect the suffering of weeping mothers 2,000 years ago to particular incidents in the community, such as praying for mothers and fathers who have lost children to gang violence.

This type of deliberate prayer can facilitate recognition that "there are still women weeping today" in cities across the country "because injustices are still happening today," Tirres said.

Living Stations of the Cross are also reminders that "God struggles with and for us," De Anda said. 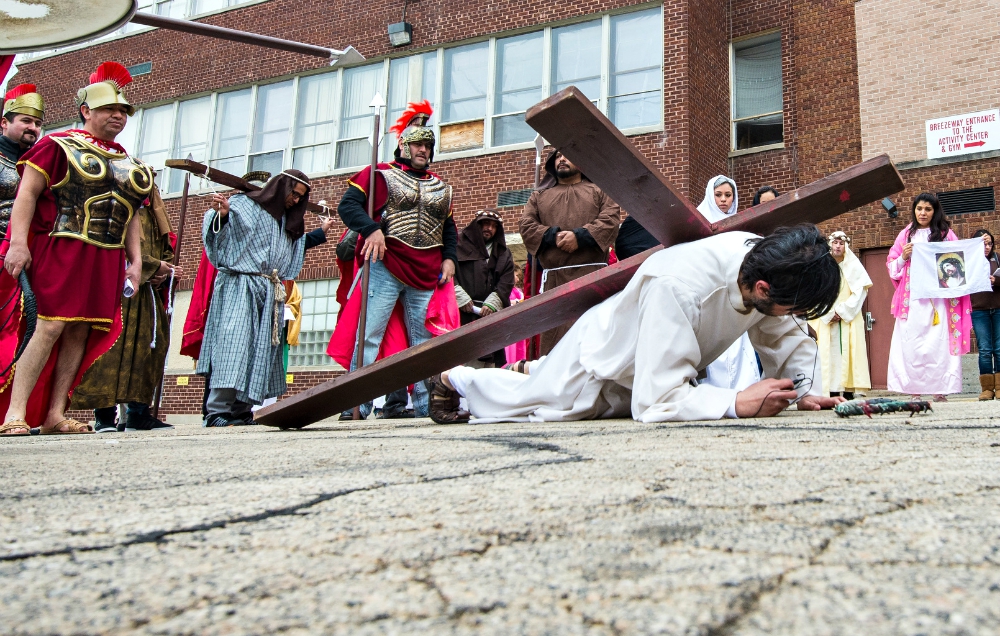 Members of the Hispanic community of St. Therese Parish in Appleton, Wisconsin, participate in a re-enactment of the Stations of the Cross on Good Friday, April 3, 2015. Luis Giraldo, who played Jesus, is depicted falling a second time at the seventh station. (CNS/The Compass/Sam Lucero)

Active participation through processions, especially in the Latino community, promotes a feeling of interconnectedness with Jesus. "There is something about giving back to God," said De Anda.

'Deep teaching at its best'

In Pilsen this year, that connection between the suffering of Jesus and modern injustice will go deeper than specific prayers, many of which will focus on immigration and violence. Denice Coronel, the actress playing Mary on Good Friday, won't have to fabricate the pain of losing a son; those feelings will be raw and authentic.

Just two months ago, her teenage son was killed — shot in the head while sitting in his car stopped at a red light. Erick Alvarez had attended and participated in the Pilsen Via Crucis with his family for the past four years and was looking forward to participating once again this year, according to his stepfather, Cesar Estrada. The Via Crucis is such an important tradition to their family that they included a T-shirt from the 2018 Via Crucis in Alvarez's casket.

Quintana said that typically Mary is played by the actual mother of whoever is playing Jesus. However, the group agreed to give the grieving mother the role of Mary when Coronel specifically requested the part at the group's first rehearsal of the year, a few days after Ash Wednesday.

"I understand her pain," Coronel told NCR, speaking in Spanish. "I have the same pain as her of losing a son." 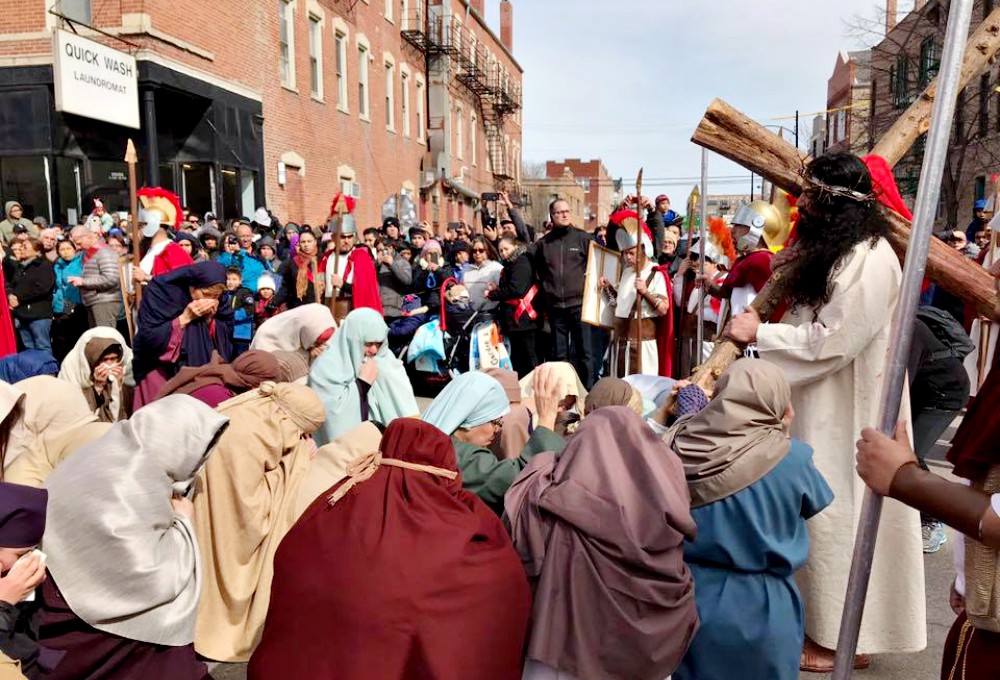 According to Tirres, Via Crucis and Way of the Cross processions are especially suited to address tragedies like that of Alvarez.

"Ritual allows people to confront their own tragedy, face it as a community, and then live through it," Tirres said. "I can't think of a better Christian message than that. That is deep teaching at its best."

Estrada said, "As we participate this year, [Erick] is in our hearts and he's going to be there walking the way Jesus did."

While imagery of suffering is certainly powerful, De Anda said that there are some criticisms that Via Crucis and Way of the Cross processions can overemphasize the suffering and crucifixion of Christ, leaving out the rest of the story.

"We need to remember we are a community of Resurrection as well," she said.

Despite concerns over the recent increase in local violence — violence that tragically took the life of Coronel's teenage son — the end of the story is not lost on the Pilsen organizers. It's what motivates them.

When asked what she thinks the Via Crucis means to her community in Pilsen, Quintana said this: "It means there's hope at the end. There's a Resurrection at the end."