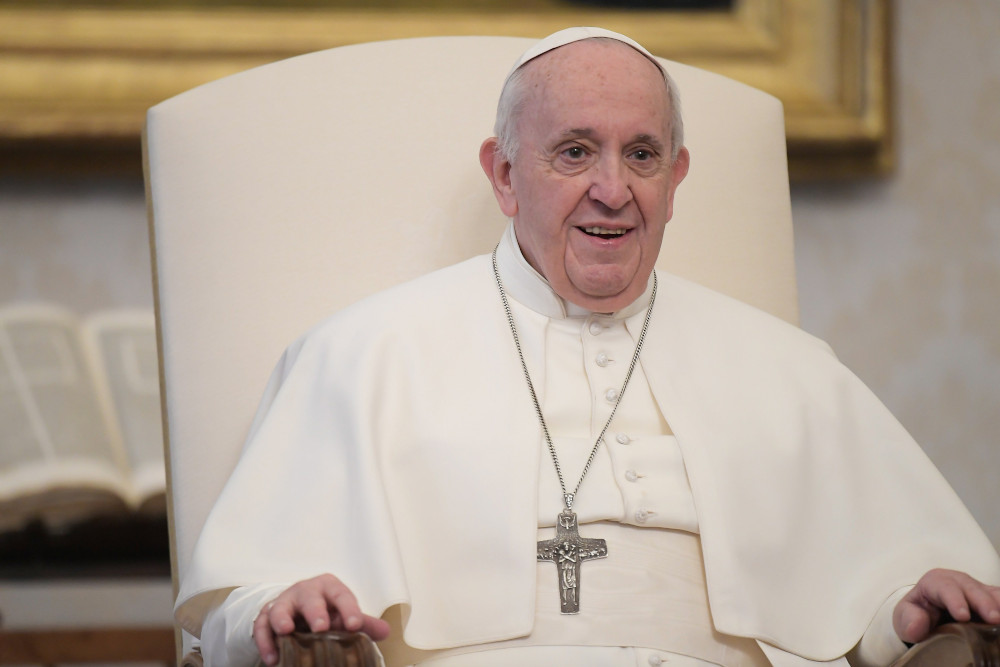 Pope Francis smiles as he leads his general audience in the library of the Apostolic Palace at the Vatican Feb. 3, 2021. (CNS photo/Vatican Media)

The liturgy is not a spectacle to be observed but a prayerful event where Christians encounter Christ's presence in their lives, Pope Francis said.

Throughout the Catholic Church's long history, people have been tempted to practice a private or "intimist Christianity" that failed to recognize the importance of the liturgy in spiritual life, the pope said Feb. 3 during his weekly general audience.

Continuing his series of talks on prayer, the pope reflected on the significance of the liturgy in Christian life.

While there are certain forms of spirituality in the Catholic Church "that have failed to adequately integrate" the liturgy, the pope noted that "much has been achieved in recent decades," particularly thanks to the Second Vatican Council's Constitution on the Sacred Liturgy, "Sacrosanctum Concilium."

The document, he said, "comprehensively and organically reaffirms the importance of the divine liturgy for the life of Christians" because in the liturgy men and women can truly encounter Christ who is "not an idea or sentiment, but a living person."

Along with sacred Scripture and the sacraments, the liturgy "may not be dispensed with because in Jesus Christ, it became a way of salvation."

"Therefore, there is no Christian spirituality that is not rooted in the celebration of the holy mysteries," the pope said.

The Mass or Divine Liturgy, he continued, is the spiritual act at the heart of "the whole Christian experience" because Jesus makes himself present and "gives himself to his faithful."

"Every time we celebrate a baptism, or consecrate the bread and wine in the Eucharist, or anoint the body of a sick person with holy oil, Christ is here!" the pope said. "He is present just as he was when he healed the weak limbs of a sick person or when, at the Last Supper, he delivered his testament for the salvation of the world."

Christians who go to Mass, he added, are not "spectators of something that slips away without our involvement" but instead are active participants who celebrate it "through the diversity of gifts and ministries."

Christians are called to transform their lives into an act of worshipping God, Pope Francis said, "but this cannot happen without prayer, especially liturgical prayer."

"This thought can help all of us: When I go to Sunday Mass, I go to pray in community, I go to pray with Christ who is present," he added, departing from his prepared remarks. "When we go to a baptism, Christ is there present. (You may say), 'But Father, this is an idea, a figure of speech.' No, Christ is present! In the liturgy, you pray with Christ who is next to you."