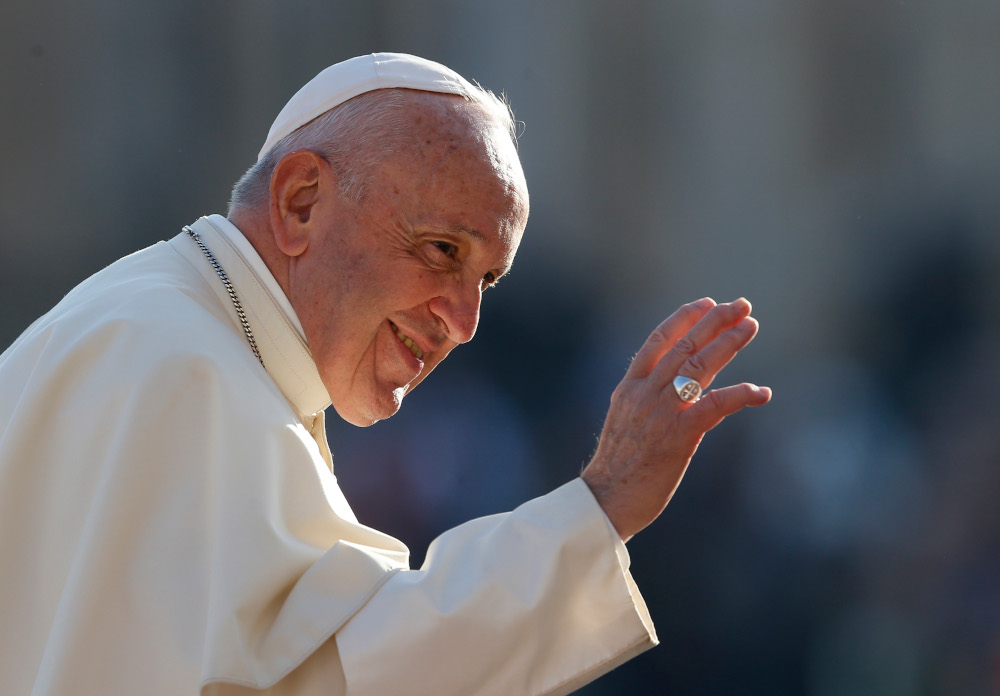 Pope Francis greets the crowd during his general audience in St. Peter's Square at the Vatican Oct. 23, 2019. (CNS/Paul Haring)

The church resolves conflicts and discerns God's will by patiently listening, discussing and deciding under the guidance of the Holy Spirit, Pope Francis said.

"It is the Spirit, in fact, who helps overcome narrow-mindedness and tensions, and works within hearts" to build unity "in the truth and the good," he said Oct. 23 during his weekly general audience in St. Peter's Square.

The pope continued his series of talks on the Acts of the Apostles, but with the Synod of Bishops for the Amazon entering its final week, he also used the day's reflection to touch on the meaning of "synodality" in the church.

The pope's catechesis looked at how the apostles dealt with a serious disagreement over whether pagans had to adhere strictly to Mosaic law as part of their salvation — specifically, did they have to be circumcised first and then baptized?

Members of the early Christian community had opposing views on what was necessary for salvation so Sts. Paul and Barnabas consulted with the apostles and the elders of Jerusalem in what is now considered the first council in the history of the church, the pope said.

The Council of Jerusalem faced "a very delicate theological, spiritual and disciplinary question, that is, the relationship between faith in Christ and the observance of Mosaic law," the pope said.

Sts. Peter and James, he said, invited the assembly "to not impose circumcision on the pagans but to ask them to only reject idolatry and all its expressions."

At the council, "a common path" emerged from the discussions and that decision was ratified, he said.

"The assembly of Jerusalem sheds an important light for us on ways to face disagreements and to seek the 'truth in love,'" Francis said.

"It reminds us that the ecclesial method for resolving conflicts is based on dialogue made up of attentive and patient listening and with discernment carried out with the light of the Spirit."

The council's conclusion also "helps us understand synodality" because it begins with the apostles saying, "The Holy Spirit and we think that ..."

Synodality, the pope said, is "the presence of the Holy Spirit, otherwise it is not synodality, it is a parlor, a parliament, something else."

The need to resolve such conflicts resulted from the fact that the apostles brought the word of God to new places, he said. In fact, the Acts of the Apostles demonstrates a church that is always going out into the world, spreading the word of God, and using the resulting persecution and exile to spread the Gospel even further to new lands.

Today's churches, in fact, must have their doors always open "because this is the symbol of what a church is — always open" so that anytime someone feels moved by the Holy Spirit and seeks God out, "they do not find the coldness of a closed door."

The pope asked that people pray that all Christians, but especially bishops and priests, strengthen their desire for and their understanding of their responsibility for building communion in Christ in the church.

May the Lord "help us live dialogue, listening and encountering with our brothers and sisters in the faith and with those who are distant (from the faith) in order to experience and show the fruitfulness of the church, who is called to be in every moment 'joyful mother' of many children."