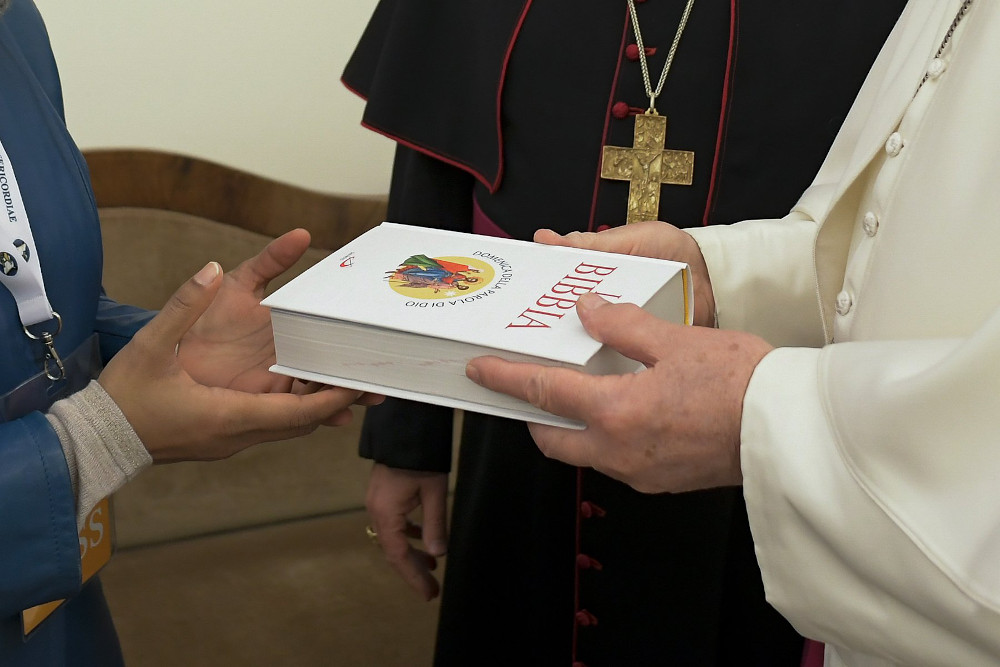 Pope Francis presents a Bible to a person at his residence, the Domus Sanctae Marthae, at the Vatican Jan. 24, 2021. Pope Francis had been scheduled to celebrate Mass in St. Peter's Basilica to mark Sunday of the Word of God but was not present due to a bout of sciatica. (CNS photo/Vatican Media)

Unable to preside over Mass on the Sunday of the Word of God because of a recurring bout of sciatica, Pope Francis' homily was read by Archbishop Rino Fisichella, head of the Pontifical Council for Promoting New Evangelization, which coordinates the annual celebration.

However, the pope did lead the recitation of the Angelus as scheduled Jan. 24.

In his written homily for the Sunday of the Word of God, the pope underlined the importance of stepping away from distractions and making time each day for reading even just a brief passage of the Bible, particularly the Gospels, where God's Word continues to say, "Do not be afraid, I am with you. I am at your side and I will always be there."

God will never retreat from "our human condition or tire of it," he wrote. "We must believe and proclaim that God has drawn near to us, that we have been forgiven and shown mercy."

God's word is "a love letter, written to us by the one who knows us best. In reading it, we again hear his voice, see his face and receive his Spirit," the pope wrote.

Plagued by sciatica attacks for years, the pope's absence from the Mass Jan. 24 was the second time he recently altered his schedule because of the painful condition; sciatica prevented him from presiding over the traditional end-of-the-year prayer service Dec. 31 and Mass for the feast of Mary, Mother of God, the following day.

Vatican spokesman Matteo Bruni said Jan. 23 that the pope also would be postponing his meeting with the Vatican diplomatic corps Jan. 25 and that Cardinal Kurt Koch would take his place the same evening at a prayer service to close the Week of Prayer for Christian Unity.

In the homily he wrote for the Mass Jan. 24, Pope Francis said people should always carry a Bible with them, "in our pocket, on our phone."

"Let us give it a worthy place in our homes" and remember to read at least a few verses daily, Pope Francis said, because its message "can touch our hearts" and "make us feel God's closeness to us and fill us with courage as we make our way through life."

About 100 people, all wearing masks, were in the socially distanced congregation for the Mass at the Altar of the Chair in St. Peter's Basilica.

The Book of the Gospels was placed on a stand that was used during every session of the Second Vatican Council and special editions of the Bible were distributed at the end of the Mass to a group of faithful, including a professional soccer player, a woman from Pakistan studying in Rome to be a Scripture scholar and a physician specializing in infectious diseases. A woman who is blind received a copy of the Gospel of Mark in braille.

The Vatican said later that the people who received the Bibles also met with Pope Francis at his residence.

Livestreaming his Angelus address from the library of the Apostolic Palace, the pope said salvation is a gift of love that calls for conversion.

Jesus "invites us to recognize ourselves as in need of God and his grace; to have a balanced attitude with regard to earthly goods; to be welcoming and humble toward others; to know and fulfill ourselves in the encounter with and service of others," the pope said.

The pope also led a short moment of silence for Edwin, a 46-year-old from Nigeria who was homeless and died from the cold not far from St. Peter's Square Jan. 20.

"Let us think what this man was feeling, 46 years old, in the cold, ignored by everyone, abandoned, even by us."