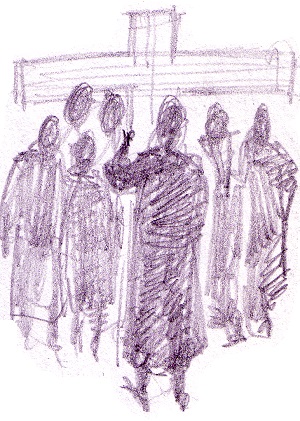 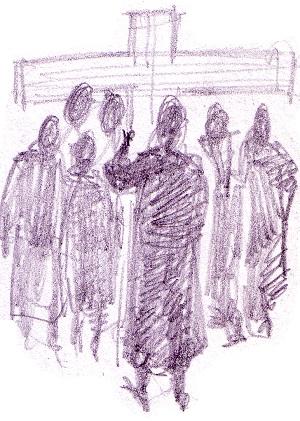 One of Gary Larson’s cartoons shows God creating the human race in a mixing jar, adding a range of personality types, then deciding to include “a bunch of jerks” to make things interesting.

If freedom were necessary to give us the dignity of voluntarily participating in God’s plan for the Universe, it also insured that ignorance and malevolence would be sown into the field of human behavior. Any reading of history reveals the appalling power of even a small group of liars and cheaters bent on frustrating human progress toward common ideals and basic fairness.

Genesis 18 links the beautiful story of God’s visit to Abraham and Sarah at the Oaks of Mamre to promise them a child with the lurid story of the fiery destruction of Sodom and Gomorrah. The central covenant of the Chosen People is framed against the divine decision to cleanse the land of abomination and violence. Good and evil are contrasted in iconic terms.

But the heart of the drama is a contest between God and Abraham over the fate of the two cities. Abraham stands in the breach between God’s righteous anger and reprieve because of the possibility that the innocent will be punished along with the guilty. Abraham argues that God’s essential justice limits him from executing punishment on everyone if there is even a small group of good people among the bad. Like a skilled advocate, Abraham negotiates from 50 innocent people down to a mere 10 to save the infamous cities.

Moses will repeat this role as paraclete in Exodus 32:11-14, when he talks God out of destroying the Hebrews in the desert after they forge a golden calf to worship. He reminds God that the divine honor rests on keeping his word to save his people with mercy despite their selfish stupidity.

The problem of evil is at the core of salvation history. What is God to do with persistent sinfulness, the deliberate repudiation of every attempt to heal the world with justice and love? The short answer is that God takes the burden of evil onto himself, absorbing the full blow of suffering caused by human sin in the person of Jesus. Calvary fulfills the image in Genesis and Exodus of the leader who stands in the breach to save his sinful people from self-destruction.

The ancient stories fascinate us because we cannot ponder them enough to find the answers to the questions they pose. We are left with the example of how God approaches evil with infinite patience and mercy rather than the impulse we ourselves indulge at the end of every movie to simply blot it out with fire and fury.

There are jerks among us, but also within us. God invites us to use our ingenuity to negotiate a better world by opposing injustice, protecting the innocent and, as long as it takes, by building societies in which it easier to be good than to be bad.