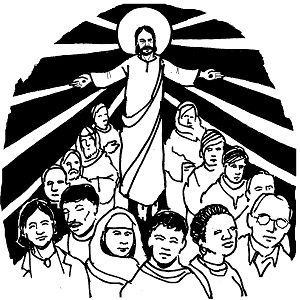 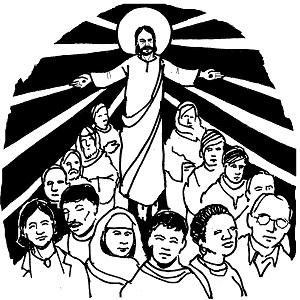 There are two farewells going on in today’s readings. Paul is on his way back to Jerusalem from his third missionary journey, and it is revealed to him that he will be arrested there and sent to Rome.  The final chapters of Acts recount the dangers, rejections and sufferings he experiences until he arrives and is placed under house arrest in Rome.  Tradition holds that he was beheaded during a violent purging of the church by Nero.

In today’s readings Paul stops to say goodbye to the church at Ephesus, knowing he will never see its members again. The elders try to dissuade him, but Paul accepts his fate in order to complete his mission to the Gentiles by carrying the Gospel from Jerusalem all the way to the heart of the empire.  His martyrdom will witness to the power of the Gospel to overcome the world.

In today’s Gospel, the Last Supper ends with Jesus praying to his Father for the disciples. Sometimes called his Priestly Prayer, this last discourse before his death summarizes the rich theology of the fourth Gospel.  Jesus is fully aware of his identity as the Christ, the pre-existent Son of God. As the Word Incarnate, he has brought heaven to earth, divinity to humanity. This is God’s glory, to share the divine life with the disciples, to give human beings a divine destiny.  The Father has emptied himself into the Son. By his death, Jesus is emptying himself into his followers, giving them everything the Father gave him.

John’s vision shows us the divine view of history while Paul’s ministry, including his suffering and death, show us the human side and cost of the Gospel for Paul because of his witness and his preaching.  Like Jesus on the cross, Paul spends his final years imprisoned and awaiting death, yet in his chains he performed his most important ministry.  “I have been crucified with Christ. It is no longer I who live, but Christ who lives in me. And the life I now live in the flesh I live by faith in the Son of God, who loved me and gave himself for me” (Gal 2:20).

We also live by faith in between the mystery and history. Only the Holy Spirit can sustain the church in its earthly pilgrimage toward its heavenly purpose. Only the Spirit can enable us to live with eyes that see the glory of God at work in our everyday, ordinary human experiences.  Despite our brief and limited lives, we still can reveal the glory of God each day by making ourselves open and available to the work of the Holy Spirit. Multiply this faith and this willingness by every member of the body of Christ, we reveal the living church.