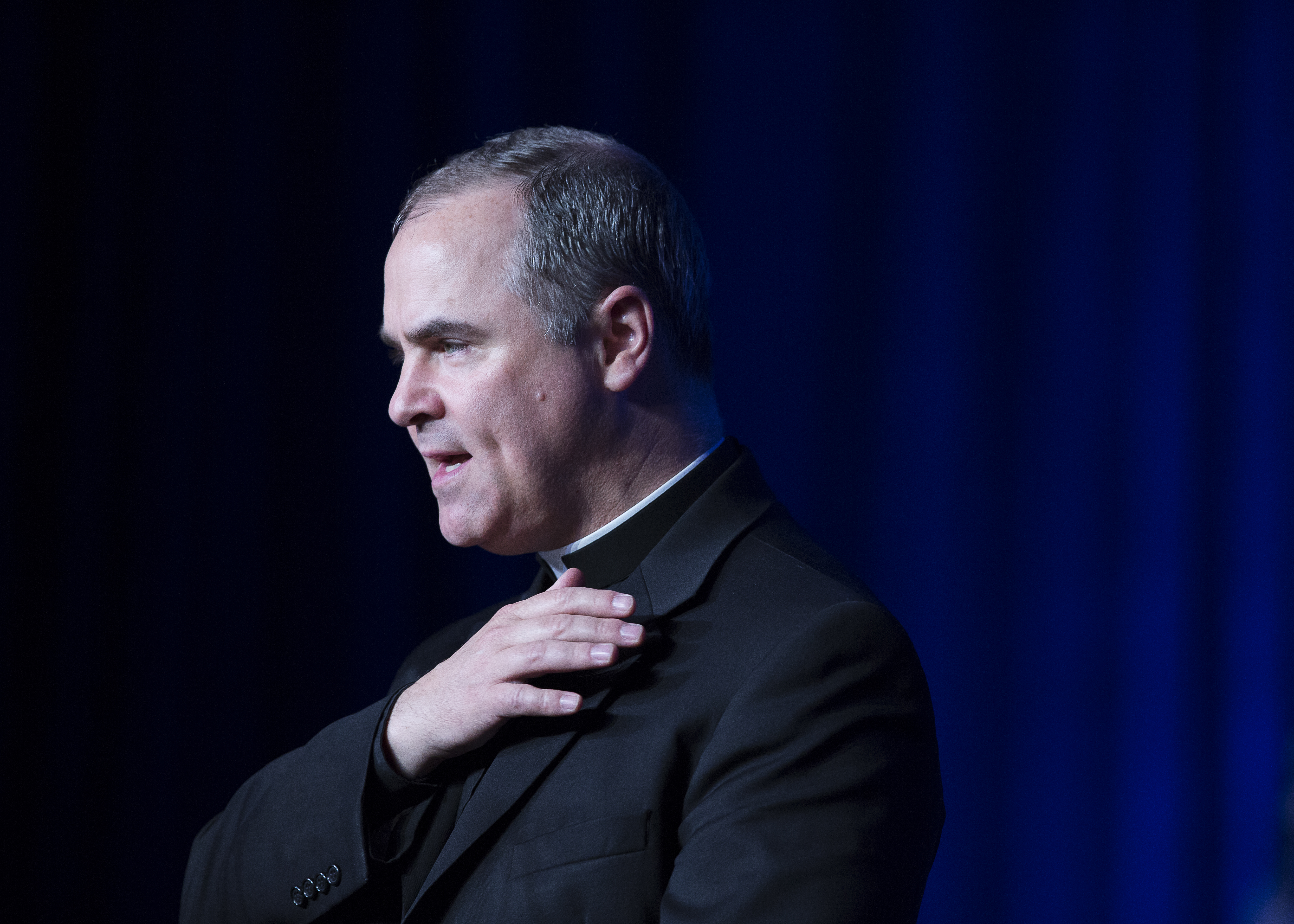 Father Paul Scalia of Arlington, Va., leads the Pledge of Allegiance during the National Catholic Prayer Breakfast May 24 in Washington. (CNS/Tyler Orsburn)

This year's National Catholic Prayer breakfast took on a decidedly Kansas flavor, as Archbishop Joseph Naumann of Kansas City and Sam Brownback, a former House and Senate member and governor of Kansas, addressed nearly 1,000 gathered at a Washington hotel May 24.

Also speaking was outgoing Speaker of the House Paul Ryan, R-Wisconsin, who was a staffer for Brownback in the latter's early days in Congress.

"We support the right to religious freedom," said Brownback, now the U.S. at-large ambassador for international religious freedom. It is not because that right appears in the Constitution or the U.N. Declaration on Human Rights, he said, but "because it's a God-given right."

"It's important to us because it's important to God," Brownback said. The right to religious freedom is "not in our DNA, but it's in our souls," and all humans have that right "even if we disagree with their path or destination."

Despite this, "more people are being persecuted for their faith right now than at any other time in human history," according to Brownback. "God knew before he made us that we would mess it up -- and he created us anyway."

Brownback began his remarks by congratulating those in the audience who "fought and fought and fought" for the right to life. He said that during his six years as Kansas governor, which ended with his February confirmation to the ambassadorial post, he had "signed 19 pro-life bills, and we had 17,000 fewer abortions in Kansas in those six years than we had in the prior six years."

Ryan, who is not running for re-election, thanked those in attendance "for what do you on this excellent journey."

He lamented the political culture in Washington. "'Survival of the shrillest' is what some people call us these days," he said. It seems, he added, as if everything is viewed "always in survival mode" and people find intrigue in things "that frankly aren't all that intriguing."

In Washington politics, Ryan said, "optics" is what counts. "That is a word I will not be missing," he said to laughter.

"As Catholics, there is nothing more fulfilling than fulfilling our mission with passion, with prayer and with joy," Ryan said.

He lauded the twin principles of subsidiarity and solidarity as the best approach to dealing with issues, rather than relying on government to solve every problem. With those principles in hand, Ryan said, "people and problems are not treated as if they're distractions,"

In his remarks, Naumann, who begins a three-year term in November as chairman of the U.S. bishops' Committee on Pro-Life Activities, warned that the nation's most serious crisis is "a God-crisis -- a crisis of faith."

He looked askance at "the large number of millennials who profess atheism or, even more commonly, identify themselves as spiritual, but not religious. This nonreligious spiritualism is a new paganism, where God is not the God of revelation who makes himself known to us, but a god or gods that are fashioned in our own image to reinforce our own desires."

Naumann said, "It is this loss of a sense of God that also leaves us vulnerable to losing sight of the innate value of each and every human being." It promotes a culture in which "human life becomes just another thing in a world of things. Materialism reigns and breeds utilitarianism; our value is determined by our usefulness," he said.

"We are called to renew our nation, not primarily by enacting laws, but by announcing the joy and hope of the Gospel of Jesus to individuals in desperate need of its good news. It is our task to reclaim our culture -- one mind, one heart, one soul at a time," Naumann said.

To do so, he added, we need Jesus. "Jesus defeats humanity's twin enemies, sin and death, by walking through death to eternal life. We believe in a God who died but is far from dead. The triumphant, risen Lord is still animating the lives of those who open their hearts to encounter his love. Thus for the Christian, we are never without hope," the archbishop said.