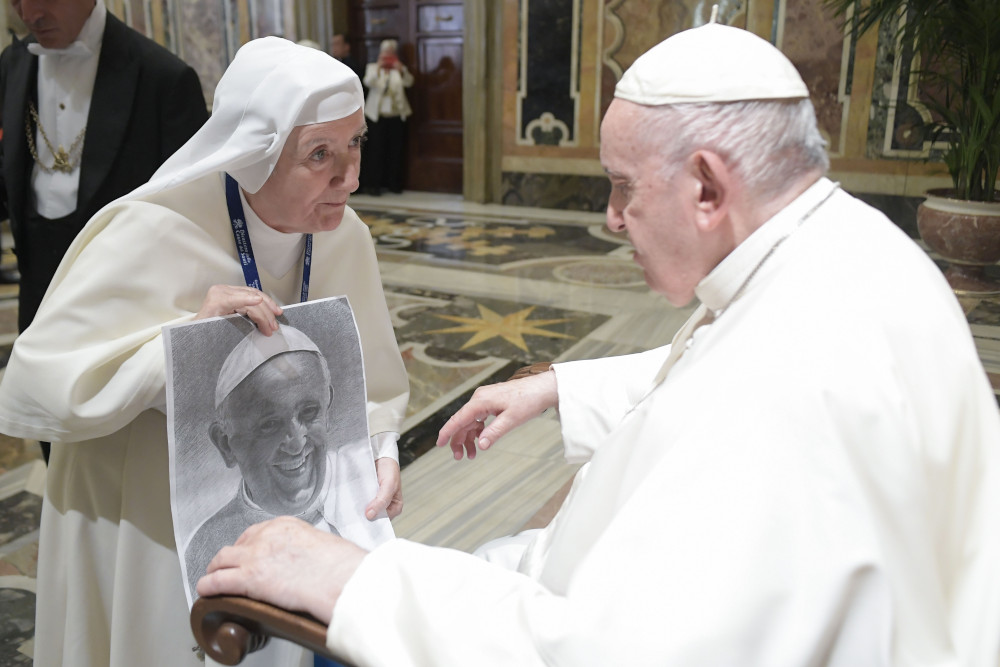 Pope Francis looks at artwork of himself presented by a nun during an audience with the participants of a symposium on "Holiness Today," sponsored by the Dicastery for the Causes of Saints, at the Vatican Oct. 6, 2022. (CNS photo/Vatican Media)

The holiness of saints is reflected not only in how they overcame struggles but by their ability to transmit the joy that comes from being loved by God, Pope Francis said.

The gift of sharing the love and mercy Christians receive from God "enables us to experience an immense joy that is not a fleeting emotion or mere human optimism, but the certainty that we can face every challenge with the grace and the assurance that come from God," the pope told participants at a Vatican conference on holiness.

"Without this joy, faith shrinks into an oppressive and dreary thing; the saints are not 'sourpusses,' but men and women with joyful hearts, open to hope," he said, meeting conference participants Oct. 6.

The conference, "Holiness Today," was sponsored by the Dicastery for the Causes of Saints and held Oct. 3-6.

During the conference, Cardinal Marcello Semeraro, prefect of the dicastery, announced the creation of a commission that will recognize Christians who, although not canonized and perhaps not Catholic, were exemplary and even heroic witnesses to the Christian faith.

In an interview with Vatican News Oct. 5, Semeraro explained that a "Commission for the Witnesses of the Faith" was set up on a temporary basis by St. John Paul II for the Jubilee Year 2000 and recognized Christians martyred for the faith in the 20th century, mainly under the Nazi or communist regimes.

Now, the cardinal said, Francis has asked the dicastery to reestablish the commission not just for the upcoming Holy Year 2025, but on a permanent basis.

"St. John Paul II wanted to highlight these examples of men and women who, although not canonized, strongly manifested their faith," the cardinal explained, adding that the list of holy men and women was not limited to Catholics, but to all Christians.

An example of a Christian witness of faith, he said, is Dietrich Bonhoeffer, the German Lutheran theologian who was killed in 1945 for his opposition to Nazism.

Although the Catholic Church does not proclaim him a martyr because he was not Catholic, Bonhoeffer remains "an emerging figure as a Christian witness," the cardinal said.

"Like Bonhoeffer, there are many others. Holiness is not always immediately evident in the eyes of the faithful. Our service is to highlight it," Semeraro said. "It is necessary to show that holiness is not far from us but is a call that concerns everyone. It is not necessary to be canonized, but we must respond to the call to holiness."

In his speech to conference participants, Francis reflected on the need to appreciate the everyday holiness of God's people.

"The witness of a virtuous Christian life given daily by so many of the Lord's disciples represents for all of us an encouragement to respond personally to our own call to be saints," the pope said.

The lives of holy men and women who have been beatified or canonized are also a reminder that "it is possible, and indeed rewarding, to live the Gospel to the fullest."

Saints, he said, "do not come from a 'parallel universe,' but are believers who belong to God's faithful people and are firmly grounded in a daily existence made up of family ties, study and work, social, economic and political life."

In the process of declaring saints, Francis said it is important for the church "to take into due consideration people's consensus" regarding the lives of exemplary Christians because the faithful "are endowed with a genuine spiritual sense that enables them to identify and recognize in the concrete lives of certain baptized persons a heroic exercise of Christian virtues."

A person's reputation of holiness, he added, "does not come primarily from the hierarchy but from the faithful themselves."

While access to the media can bring greater awareness of the holy lives of candidates for beatification or canonization, the pope warned that in using digital media and social networks, "there can be a risk of exaggeration or misrepresentation dictated by less than noble interests."

Nevertheless, Francis said the lives of the saints and holy men and women are "precious pearls" that illustrate the message that God "loves everyone with immense love and infinite tenderness."

"May their example enlighten the minds of the women and men of our time, reviving faith, enlivening hope and kindling charity, so that everyone may feel drawn to the beauty of the Gospel, and no one may wander amid the gloom of meaninglessness and despair," the pope said.