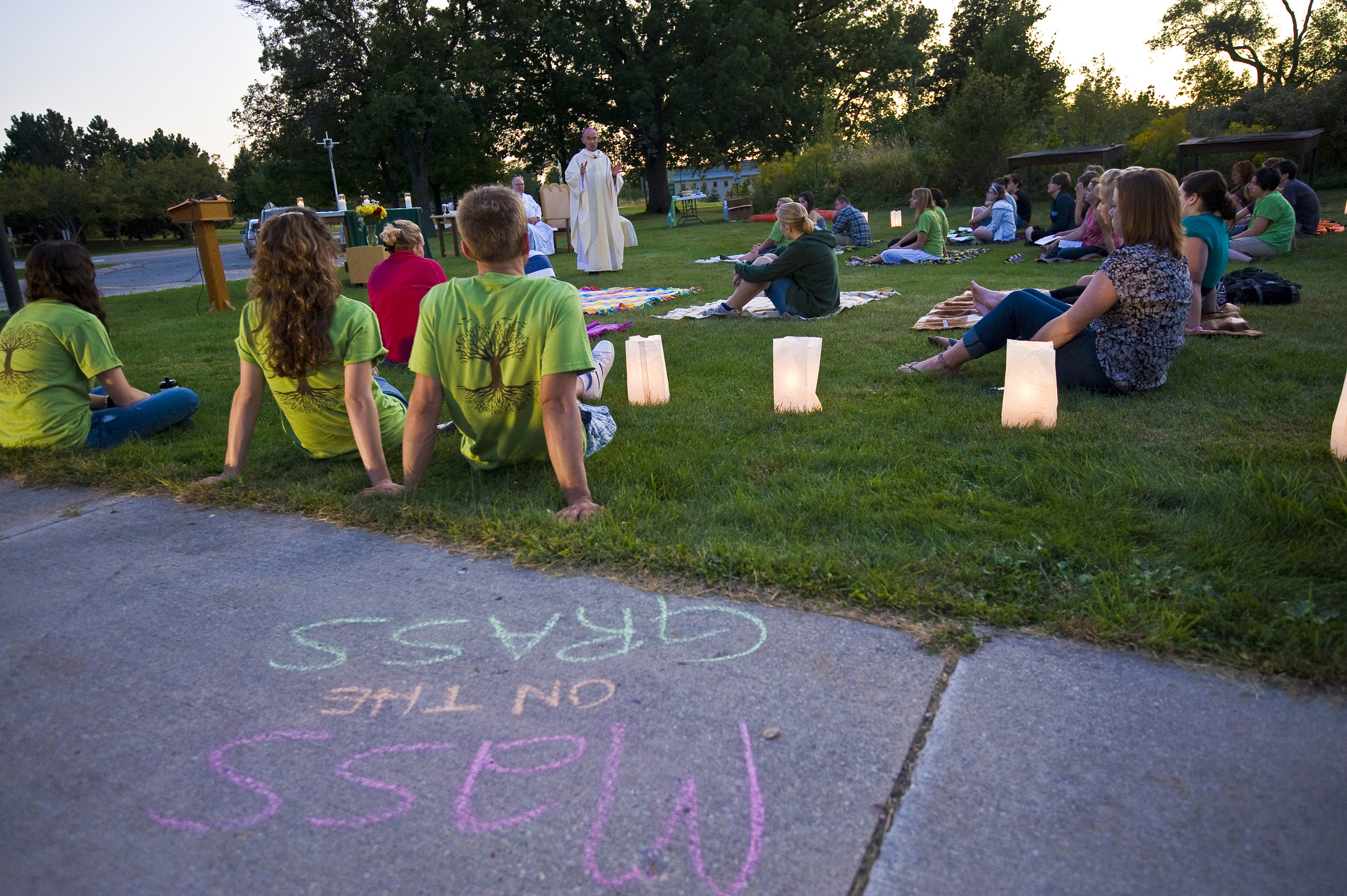 Auxiliary Bishop Robert F. Morneau of Green Bay, Wis., delivers his homily during a 2011 outdoor "Mass on the Grass" at the Richard Mauthe Center on the University of Wisconsin at Green Bay campus. The service was the Newman Center's welcome event, inviting students to worship together and to learn about Catholic campus ministry. (CNS/The Compass/Sam Lucero)

At the same time, campus ministers allude to areas that can be improved, while students acknowledge areas in faith and life where they struggle.

The survey, conducted by Vinea Research, was done to help identify how to strengthen campus ministry education and formation programs as well as "renew a national vision of campus ministry as a community of faith, evangelization and discipleship," according to Vinea's Hans Plate.

Campus ministers feel they excel in accompanying people on their spiritual journey, facilitating an encounter with Jesus, providing effective pastoral care, discipling others in Christian living, discerning the needs of the campus community, and calling forth and coordinating its gifts. They also said familiarity with other religious traditions, creating and managing budgets, navigating diocesan and other institutional structures are lower priorities that could benefit from additional training.

In the survey, campus ministers said they most frequently participate in Mass, prayer with Scripture, spiritual reading and study, meditation/contemplation and journaling on a daily basis. Devotional prayer and Liturgy of the Hours also get plurality marks.

Of the 15 practices cited in the survey, missionary campus ministers -- along the lines of the Fellowship of Catholic University Students, or FOCUS -- reported doing 12 of them more than did the other varieties of campus ministers, bringing up the rear only on service/work for justice.

Campus ministers reported that among personal activities, Bible study and reconciliation stand apart from other activities as contributing to students' growth in faith. Mass, retreats, small groups and one-on-one mentoring are more significant than social events, catechesis and sacramental preparation, and men's and women's groups.

Students, in a separate survey, reported weekly involvement in personal activities through campus ministry, with the most common being prayer with Scripture, Bible study, spiritual reading, devotional prayer and meditation and contemplation activities.

Weekly Mass is a regular part of most students' lives, with 84 percent saying so. Nearly half are involved weekly with social events or small groups.

A majority of students do service or charitable work on at least a quarterly basis. Close to 40 percent are involved on a monthly basis in leadership development.

The student survey reached 3,336 students. Vinea's Plate said the findings are "not statistically sound, since we do not know how many (surveys) were sent out." They were distributed to the students by the campus ministers.

Still, "of the personal activities, the sacrament of reconciliation stands out as being both significant to growth" according to campus ministers and is "commonly practiced" by students, the survey noted.

"The value of the Mass to both parties in the research is evident. While many campus ministers see one-on-one mentoring as very significant to growth, relatively few students are doing this activity frequently," it said.

Students reported personal struggles over three broad categories. In the area of self-orientation, they included self-worth, mental health, lack of purpose, gender identity, divorce and blended families, and how to pray.

In the category of faith beliefs, they included realizing the need for confession, belief in the real presence of Jesus in the Eucharist, objective truth, and reconciling science and faith. In terms of social and moral issues, they reported living faithfully in "a hookup culture" and weighed in on such issues as pornography, abortion, racial and LGBT discrimination, sexual assault and the role of women in the church.

Among students, concern is greatest with caring for the poor and immigrants, racial tensions and pro-life issues.

"Hispanics were concerned 'a great deal' with the disparity of wealth, racial tensions, and solidarity with the poor (compared to) non-Hispanics. Pro-life issues was the only concern where Hispanics were less concerned 'a great deal' than non-Hispanics," the survey said. Hispanics, about 11 percent of all respondents, reported being more concerned with racial discrimination. A slightly higher percentage also selected as areas of personal struggle abortion and confusion about gender identity.

"In most every area of struggle measured, self-described liberal Catholics are more likely to struggle than their traditional counterparts -- not only in predictable social topics and areas of teaching, but also in internal areas such as self-worth," the survey said. "Only pornography and, to a lesser extent, divorce/blended families do not vary by Catholic designation."

Students who identified as liberal Catholics had a greater deal of concern than their moderate and traditional counterparts on issues such as solidarity with the poor, care for immigrants and refugees, racial tensions, disparity of wealth, LGBT issues and the role of women in the church, while traditional Catholics voiced more concern on pro-life issues and the definition of marriage than their liberal and moderate fellow students.

A three-day conference to interpret survey results was conducted in October. Ultimately, the research findings are expected to lead to development of a new curriculum of formation, preparation and ongoing professional development for campus ministers.