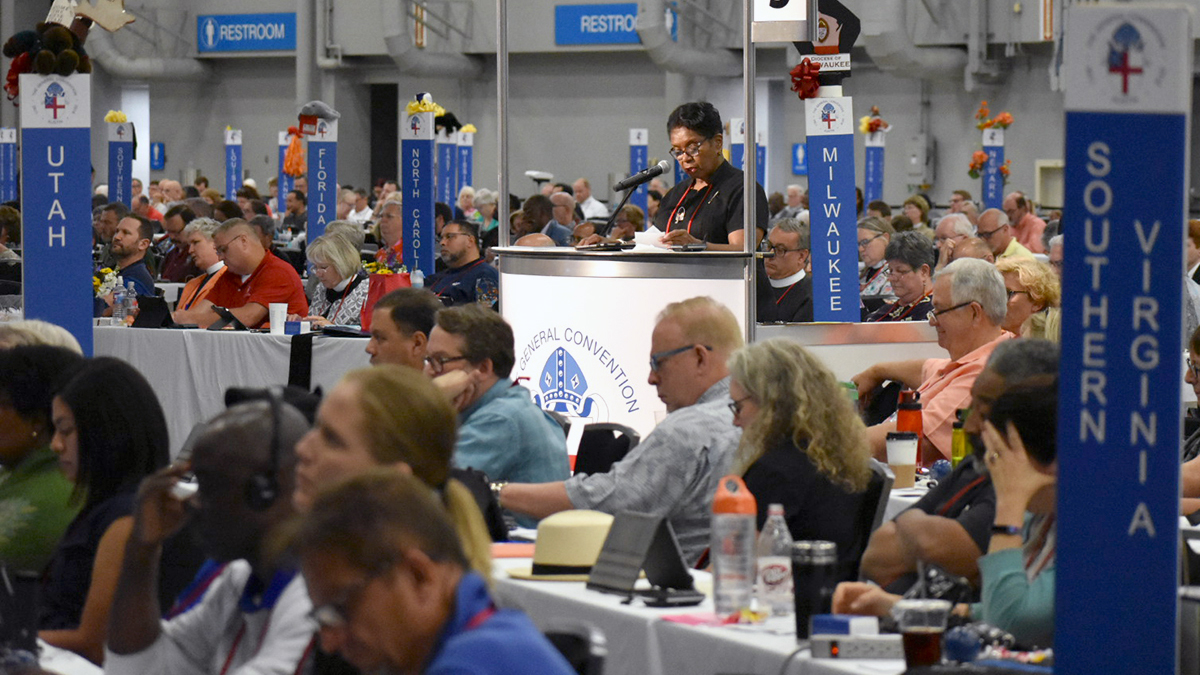 For some watching (and blogging and tweeting) the debate on the floor of the Episcopal Church's triennial General Convention this week, it sounded as if someone were trying to give God a sex change.

Bishops, priests and lay delegates, who have been meeting in Austin since July 5, are discussing legislation that would make changes to the Book of Common Prayer aimed at stripping away some of the masculine descriptions of God in favor of more "expansive" language.

During the hours of debate over the weekend, delegates butted heads over tradition, theology and what it means to be welcoming. One argued that children of all genders should hear language that allows them to feel made in God's image. Another speaker, a delegate from an urban parish that serves poor families, said the masculine nature of God is crucial for children growing up without a father.

"Both sides are worried about alienating the people we've got and not being welcoming to the people we don't have," said the Rev. Cathy Tyndall Boyd, rector of St. Martin's Episcopal Church in Williamsburg, Va.

Some also had practical concerns: Revision opponents suggest that the approximately $1.9 million it would cost to develop the language, with an expected $8 million to print and distribute the new books, could be better spent on evangelism, racial reconciliation efforts and training new church leaders.

The discussion has attracted attention outside of the Episcopal Church as well as within it: Traditionalist Christians, including those whose own denominations are considering similar changes, worry that gender-neutral terms for God undermine the concept of the Trinity.

But the Rev. Ruth Meyers, a liturgy professor at Church Divinity School of the Pacific in Berkeley, Calif., said the proposal shouldn't be seen as an attempt to neuter God.

"This is not about eliminating language about God the Father, about Jesus the Son," she said. "This is about expanding the language of God so every person can see and understand they are made in the image of God."

Indeed, many comments from the convention floor stemmed from concerns other than gender.

The book needs clearer language on salvation and atonement theology and the stewardship of creation, some argued. A prayer currently said over the bread and wine during the sacrament of the Eucharist describes humanity as "rulers of creation," which could be changed to "stewards of creation."

Delegates also suggested broadening the cultural perspectives in the prayer book. One priest lamented a prayer of thanksgiving that opens with "Almighty God, who hast given us this good land for our heritage," a line she said could alienate Native Americans.

Concerns were also raised over what some said were inadequate Spanish, French and Haitian Creole translations of the prayer book.

The Episcopalians aren't the most progressive denomination when it comes to language. Twenty years ago, they issued a supplement to the prayer book that incorporated gender-neutral language, but by comparison, the Unitarian Universalist Association is expected to make all language in the church bylaws gender neutral at its General Assembly this summer. Judaism's Reform movement has used gender-neutral language in its prayer book since 2007.

But perhaps because Episcopalians represent such a wide range of political and theological beliefs, they consider the prayer book the "primary symbol of our unity." Nothing riles them more, they often joke, than tinkering with it.

Originally published in 1549 after England broke from the Roman Catholic Church, the book is used in varying versions by the worldwide Anglican Communion. The Episcopal Church last updated the Book of Common Prayer in 1979, revising the 1928 version, with its "thees" and "thous," by adding modern prayer language and new rites. The changes inevitably drew outrage from traditionalists.

Sensitive to these feelings, delegates have embraced the painstaking deliberations at convention, said the Very Rev. Samuel Candler, chair of the prayer book legislation committee.

"There is the movement of the spirit even in parliamentary procedure and even in committees," he said.

If so, the spirit moves very slowly. Passing a resolution requires approval from both houses of the church's bicameral governing body — the House of Bishops and the House of Deputies, the latter consisting of clergy members and lay people elected from each diocese — which adhere to a strict order of debate.

On July 7, the House of Deputies passed an amended version of the prayer book resolution. It now awaits action from the bishops. If the measure passes there without any changes, the Standing Commission on Liturgy and Music will begin a three-year listening tour, conducting surveys and holding meetings with the denomination's roughly 2 million members. A new prayer book would have a trial run in 2024 and would not go into official use until 2030.

The Rev. Mary Sulerud knows well the challenges of retooling divine language. While attending Virginia Theological Seminary in the 1980s, she participated in trials for supplemental liturgies that used gender-neutral terms for God and highlighted the role of women in church history. Some of those prayers were used in Enriching Our Worship, the liturgical resource developed in the 1990s as a companion to the Book of Common Prayer.

Now canon for discernment and congregational vitality in the Diocese of Maryland, Sulerud said the response then, as now, was mixed.