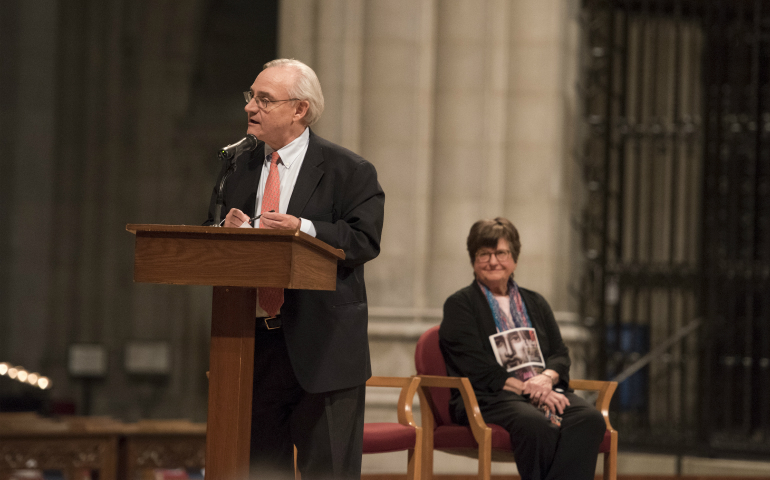 E.J. Dionne, syndicated columnist and Georgetown University professor, moderates a panel discussion on the death penalty with religious leaders Feb. 6 at the Washington National Cathedral. At right is Sister Helen Prejean, a Sister of St. Joseph of Medaille, who is a longtime opponent of capital punishment and author of "Dead Man Walking." (CNS photo/Danielle E. Thomas, Washington National Cathedral)

The Supreme Court's Feb. 22 decision to block the execution of an African-American inmate on death row in Texas over racially biased testimony in his sentencing hearing is "another stride toward greater justice in our legal system," said a Catholic anti-death penalty leader.

"This decision reflects the extent to which the death penalty is racially biased and a broken policy," said Karen Clifton, executive director of the Catholic Mobilizing Network to End the Death Penalty.

In a 6-2 ruling, the court agreed that Texas inmate Duane Buck had been unfairly represented by an expert defense witness who told jurors that Buck was more likely to commit violent crimes in the future because he is black.

"Buck may have been sentenced to death in part because of his race," wrote Chief Justice John Roberts in the majority opinion. "Our law punishes people for what they do, not who they are."

Buck's guilt or innocence was not at stake — he was convicted 20 years ago for the 1995 murders of his ex-girlfriend and another man in front of her children. What had been called into question was whether he was given a fair sentence. Now he will be able to go back to a lower court and request a new sentencing hearing.

In the years since his 1997 hearing, Buck's attorneys appealed his sentence, saying he had been denied effective assistance of counsel, but they were repeatedly told the claim was raised too late. In 2014, Buck's lawyers brought the case back to federal court and lost, which is why they appealed to the Supreme Court.

In the Feb. 22 opinion, handed down just hours before Buck was to be executed by lethal injection, Roberts said the inmate's appeals had fallen into a "labyrinth."

The state of Texas had acknowledged error in six other cases based on similar testimony by the same psychologist, Walter Quijano, who raised the charge of Buck's future danger. Although the other cases were reviewed, Buck's was never reopened because the prosecution was not to blame in his case.

By Texas law, the death sentence must come from a unanimous jury decision that the defendant would pose a threat of future danger.

The comments about Buck's future danger were made twice in his hearing and downplayed by the courts that had rejected his appeals. But Roberts stressed that the amount of time given to the charges in court did not matter; the fact that they were even said carried weight.

"When a jury hears expert testimony that expressly makes a defendant's race directly pertinent on the question of life or death, the impact of that evidence cannot be measured simply by how much air time it received at trial or how many pages it occupied in the record," Roberts wrote.

"Some toxins can be deadly in small doses," he added.

The 12-page dissent, written by Justice Clarence Thomas and joined by Justice Samuel Alito, stressed that the jury could have reached the same verdict even without Quijano's testimony because of the evidence of the heinousness of the crime and Buck's lack of remorse.

Thomas noted that the one positive aspect of the court's ruling was that it was specific to a unique case and was not likely to have a broader impact.

But those against the death penalty see each action against it as part of something bigger.

Sister Helen Prejean, a Sister of St. Joseph of Medaille and longtime opponent of the death penalty, tweeted a message after the court's ruling in Buck v. Stephens: "The death penalty system in America is infected with the disease of racism. There is no cure. It's time to do away with executions for good."

And Christina Swarns, litigation director for the NAACP Legal Defense Fund, who argued Buck's case before the Supreme Court said in a statement after the ruling: "Today, the Supreme Court made clear that there is no place for racial bias in the American criminal justice system."

She added that the court "reaffirmed the long-standing principle that criminal punishments — particularly the death penalty — cannot be based on immutable characteristics such as race."

Clifton, from Catholic Mobilizing Network to End the Death Penalty, praised Swarns for her "dedication and tireless work to end the death penalty" in a Feb. 22 email to Catholic News Service.

She also said the court decision acknowledges "one of the several serious moral issues with the death penalty," which she said is "coming to be understood as a failed system."