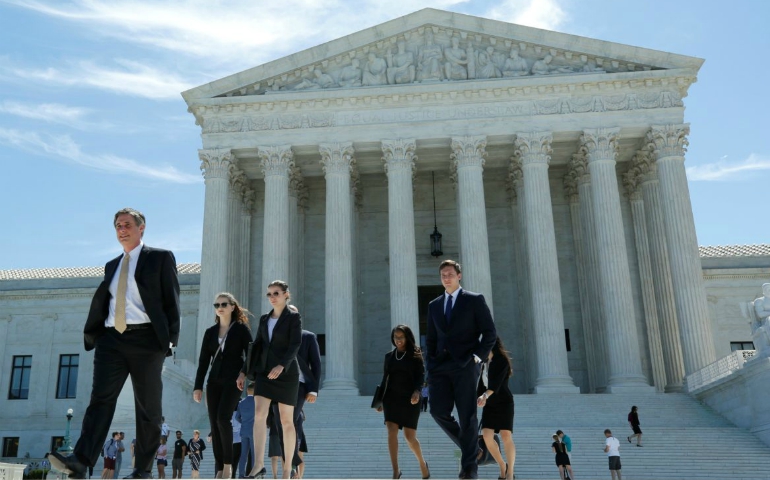 People walk out after the U.S. Supreme Court granted parts of the Trump administration's emergency request to put his travel ban into effect immediately while the legal battle continues, June 26, 2017, in Washington, U.S. (Yuri Gripas/REUTERS)

The Supreme Court delivered a mixed ruling on June 26 that will allow President Trump to implement his travel ban against six Muslim majority nations — but only for visitors lacking ties to the United States.

The court ruled that Trump may bar people from six majority Muslim countries — Iran, Libya, Somalia, Sudan, Syria and Yemen — if they have no "bona fide" relationship to the U.S. Those that have established ties will be allowed to continue entering the country.

That means officials at the Department of Homeland Security and the State Department will have to begin sorting through each application submitted by travelers from the six targeted countries to determine if they have enough of a link to the U.S. to enter.

The justices provided several examples to explain who may enter the country:

"In practical terms, this means that (the executive order) may not be enforced against foreign nationals who have a credible claim of a bona fide relationship with a person or entity in the United States," the court wrote.

The Supreme Court ruled that a complete ban went too far, and it only blocked that part affecting those with "standing" to challenge Trump's executive order in U.S. courts.

The court ruled that Trump's order may have violated the rights of U.S. citizens, universities and businesses by preventing them from bringing in their relatives, students and employees from overseas.

But the court concluded that foreigners who have no ties to the U.S. cannot argue, on their own, that constitutional protections apply to them. They're not U.S. citizens, U.S. students or U.S. employees, so the protections established in the Constitution do not apply to them.

The court ruled that the administration's main argument — that the travel ban is needed to improve vetting procedures to stop would-be terrorists from entering the country — is at its "peak" when applied to foreigners who have no ties to the U.S.

"The interest in preserving national security is, 'an urgent objective of the highest order,'" the justices wrote. "To prevent the Government from pursuing that objective by enforcing (the travel ban) against foreign nationals unconnected to the United States would appreciably injure its interests, without alleviating obvious hardship to anyone else."

Justice Clarence Thomas issued a warning about creating such an arrangement, warning that a "flood of litigation" will soon follow as the administration tries to walk the line established by the Supreme Court.

"I fear that the Court's remedy will prove unworkable," Thomas wrote. "Today's compromise will burden executive officials with the task of deciding — on peril of contempt — whether individuals from the six affected nations who wish to enter the United States have a sufficient connection to a person or entity in this country."

The earliest the administration can begin enforcing the portions of the travel ban allowed by the Supreme Court is Thursday.