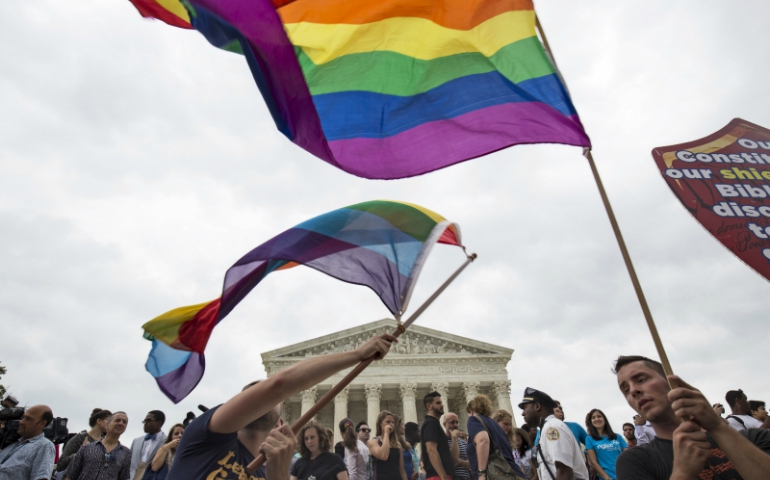 Supporters of gay marriage wave the rainbow flag after the U.S. Supreme Court ruled on June 26, 2015, that the U.S. Constitution provides same-sex couples the right to marry. (Courtesy of Reuters/Joshua Roberts)

The Supreme Court agreed June 26 to reopen the national debate over same-sex marriage.

The court will hear a challenge from a Colorado baker who had lost lower court battles over his refusal to create a wedding cake for a gay couple. Like a New Mexico photographer three years ago, the baker cited his religious beliefs.

The justices — who upheld same-sex marriage nationwide in a landmark 2015 ruling — apparently decided that despite state laws barring discrimination based on sexual orientation, the merchants' obligation to same-sex couples was not necessarily baked in the cake.

Colorado and New Mexico are among 21 states with such laws. As a result, Jack Phillips, the owner of Masterpiece Cakeshop, previously has lost in his effort to claim that the First Amendment protects his freedom of expression.

Twenty-nine states have no such laws, so gays and lesbians freed to marry by the Supreme Court in 2015 still can face discrimination in employment, housing and public accommodations. A Kentucky appeals court recently upheld a printer's right to refuse to print shirts promoting a gay pride festival, reasoning that his actions did not discriminate against any individuals because of their sexual orientation.

Phillips, like Washington State florist Barronelle Stutzman and others across the country, has argued that his religious objections are paramount. Rather than bake for same-sex weddings, he stopped making wedding cakes altogether, at a substantial revenue loss.

The key to the outcome of similar cases appears to hinge on whether states have laws barring discrimination against gays and lesbians, or whether they have laws protecting religious liberty. Colorado falls on one side of the ledger, Kentucky on the other.

The Supreme Court has sided with religious believers before, most recently by allowing an exception to the Affordable Care Act's requirement that most businesses offer health insurance coverage for contraceptives that some equate with abortion.

Phillips' legal battle began several years ago, when Charlie Craig and David Mullins came in to order a cake for their wedding reception. While the wedding was held in Massachusetts, where same-sex marriage had been legal since 2004, the celebration was planned for back home in Colorado.

Phillips, a born-again Christian, refused to bake the cake. Craig and Mullins filed a civil rights complaint and won, first before an administrative court judge, then before the state Civil Rights Commission, and finally before the Colorado Court of Appeals. The state Supreme Court refused to hear the case.

The U.S. Supreme Court passed up its first chance to hear a similar case in 2014 — eight years after Elaine Huguenin and her husband, Jonathan, told a lesbian couple that their Albuquerque photo studio only worked "traditional weddings."

The Huguenins' petition to the Supreme Court was based on their freedom of speech and expression, which they interpreted as the right to decide what messages their photography conveys.