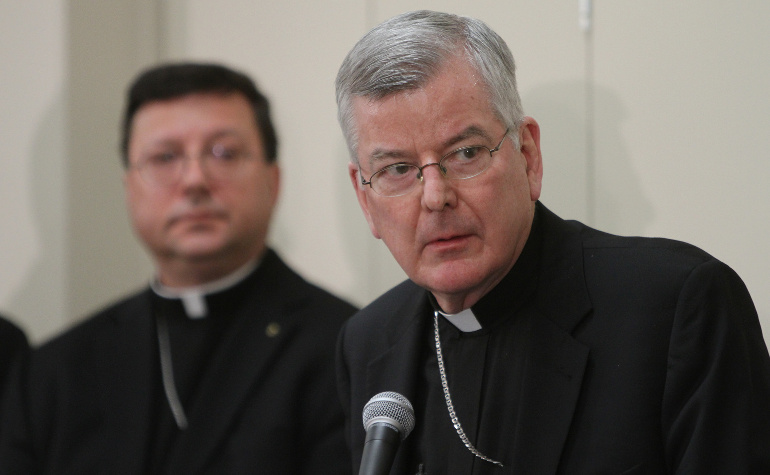 Archbishop John C. Nienstedt, right, addresses the media alongside Auxiliary Bishop Lee A. Piche at a news conference Jan. 16 announcing that the archdiocese had filed for Chapter 11 Reorganization. (CNS/Dave Hrbacek)

A prudent move. A painful process. An important step. A tiny step.

A broad cross-section of reactions met the news Monday of the resignations of St. Paul-Minneapolis Archbishop John Nienstedt and Auxiliary Bishop Lee Piché.

"I think it was a necessary move and a prudent one," said Jennifer Haselberger, the former canonical chancellor whose decision to resign the position and speak out publicly on observed mishandling of clergy sexual abuse accusations largely set off the scandal that has settled on the region since fall 2013.

The announcements came the same day as the start of the biannual presbyteral assembly, which gathers the archdiocese's nearly 400 priests for meetings through Thursday in Rochester, southeast of the Twin Cities. A priest who spoke on background said he detected among his fellow priests a sense of relief with the news, that they understood the gravity of the situation but also saw a path forward toward healing in the region.

In a letter to the priests, Nienstedt wrote of his resignation, "I would have preferred to share this with you in person, but the desire of the Holy See to announce this made it impossible to wait."

He largely repeated his public resignation statement, saying he made the move "to give the Archdiocese a new beginning amidst the many challenges we face," and that he left his post "with a clear conscience" that the chancery implemented the protocols necessary to ensure the safety of children. Nienstedt said that Auxiliary Bishop Andrew Cozzens would address them further later Monday.

In a brief statement before media late Monday morning, Cozzens said, "This has been a painful process. A change in leadership offers us an opportunity for greater healing and the ability to move forward."

"I know that you have a lot of questions, and I have to ask for your patience. There will be many unanswered questions as we take this significant, transitional step to new leadership," Cozzens said.

One of the first questions -- how do the resignations impact the criminal charges and civil petition brought against the archdiocese -- received at least a partial answer from the prosecutor who brought them 10 days prior.

In a statement to media, Ramsey County prosecutor John Choi said while many in the community may view the resignations as a positive development, the six criminal charges, the civil petition and ongoing investigation will proceed.

"As we have said, the goals of our actions are to hold the Archdiocese accountable, seek justice for the victims and our community, and to take appropriate steps to ensure that what we have alleged and intend to prove about the past conduct of church officials will never be repeated," Choi said. "Today's resignations do not directly accomplish those goals, but I believe that it is an affirmative step toward a new beginning and much needed reconciliation."

Whether the resignations could affect possible criminal charges of individuals often depends on the prosecutor, said Charles Reid, a law professor at the University of St. Thomas in Minneapolis. So far, Choi has not brought forward charges against individuals.

Reid described Choi as a "cautious, deliberate man" who doesn't tip his hand, but one with a track record for only bringing cases forward "that are serious and well-thought-out." The evidence put forth by Choi's office at least suggests some church officials sat on information related to former priest Curtis Wehmeyer before the archdiocese reported him to police in June 2012.

According to the case evidence, Piché was told by a priest in September 2010 that Wehmeyer had slept in the same bed as a boy, one of the victims in the charges, during a camping trip earlier that year. According to the priest, Piché replied, "Father Curtis Wehmeyer has many skeletons in his closet." Piché told the St. Paul police he did not recall the conversation.

Piché's resignation also removes the point person for the separate, archdiocese-initiated investigation into Nienstedt on accusations of sexual misconduct with adults dating back to his time in the Detroit archdiocese. That investigation began in early 2014 after receiving an unrelated series of allegations. The archdiocese had not responded to questions from NCR about the Nienstedt investigation by Monday evening.

Outside the investigations, Nienstedt's resignation raised the practical question of who will succeed him in the latest vacant U.S. see?

Currently, both the dioceses of Salt Lake City and Superior, Wis., are without bishops. In addition, the Kansas City-St. Joseph, Mo., diocese, like St. Paul-Minneapolis, is overseen by a temporary administrator until a successor is found to Bishop Robert Finn, who resigned in April without specific reason. In 2012, Finn was found guilty on one misdemeanor count for failure to report abuse related to a now-former priest convicted of possessing child pornography.

In the interim, Newark, N.J., Coadjutor Archbishop Bernard Hebda has been named apostolic administrator to the Twin Cities. Formerly bishop of the Gaylord, Mich., diocese, he became archbishop-in-waiting in Newark in 2013 at the request of current Archbishop John Myers.

Hebda holds civil and canon law degrees, from Columbia University and the Pontifical University of St. Thomas, in Rome, respectively. That skill set, Haselberger said, could lead to a smoother resolution of the archdiocese's bankruptcy, and possibly an agreement regarding the various charges filed against it.

Hebda will continue his duties as Newark coadjutor while serving as administrator. In his own letter to Twin City priests, Hebda said he intended "to be as available as possible" in his new role.

"The law of the Church reminds us that an Administrator is not to introduce change, but rather to facilitate the smooth continuation of the ordinary and essential activities of the Church, while advancing those positive initiatives to which the Archdiocese is already committed," he said.

As for a permanent successor to Nienstedt, the process calls for the apostolic nuncio to the U.S. to submit a list of three names to the pope, who makes the final decision. The Catholic Coalition for Church Reform, a Twin Cities organization, has already submitted to the nuncio a list of "proven senior pastors" in the archdiocese it views as "outstanding candidates to be named bishop."

"Rome needs to hear the voices of experience and judgment of local Catholics in the selection of our next leader," the group said in a statement.

In November, the coalition held mock elections of the next archbishop, arriving at Frs. Michael Byron, Paul Feela and Timothy Wozniak. None of the priests were consulted or asked their consent for the exercise.

In their statement, the coalition called for "a new attitude of inclusiveness," but welcomed the two bishops' resignations. "Healing can now begin," they said.

Not all saw that sentiment, however.

The local chapter of the Survivors Network of those Abused by Priests presented Nienstedt's resignation as "a tiny but belated step forward."

Meuers said that until the pope defrocks clerics who cover up sexual abuse of minors along with those who commit the acts, "little will change."

Attorney Jeff Anderson, whose offices are in St. Paul and who represents some of the largest creditors in the bankruptcy proceedings, said the resignations came as no surprise due to the massive volume of documents. The move "signals an important step" but not "the end to the crisis."

"It falls short of full accountability because this whole problem is not about one man or two bishops. It is about the system that's entrenched in the old ways and adhering to secrecy and self-governance operating above the law," he said in a statement.

The resignations, combined with Finn's resignation, raise another question of what this means in terms of the Vatican's response to the sexual abuse issue. Some immediately connected dots from the Twin Cities to the announcement Wednesday by the Vatican of new guidelines for accountability for bishops who mishandle cases of clergy sexual abuse.

Reid said the Nienstedt matter would appear an ideal test case for such guidelines: "It's the obvious first case."

Anne Barrett Doyle, co-director of BishopAccountability.org, said the Twin Cities case provides "a crucial lesson" for the tribunal to be formed under the guidelines.

"The new process must have a mechanism for suspending church officials pending investigations, and this suspension must be swift," she said, adding that Pope Francis left Nienstedt in office for months despite questions of his leadership.

In comments made after speaking at a labor conference in Washington, Cardinal Donald Wuerl said the two resignations show Francis has said that addressing the abuse issue "also has to do with people responsible.

"I think this is a great tribute to Pope Francis," Wuerl said.

Haselberger said she was cautious about making too strong a link between the new Vatican guidelines and the Twin Cities moves. For now, she said it is important for the archdiocese to move swiftly through bankruptcy and to resolve the charges against it.

"Then the real business of renewal can begin," Haselberger said.