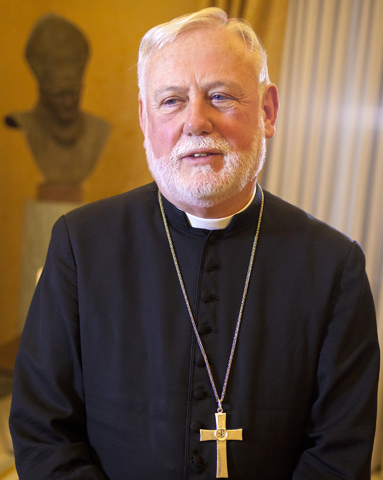 Even in the midst of bombings, Vatican ambassadors stay put, risking their lives while working to end what Pope Francis has termed a "piecemeal" World War III, said the Vatican minister of foreign affairs.

Gallagher, whose formal title is secretary for relations with states, oversees Vatican diplomatic efforts to "know what is going on in the world, understand it and interpret it" in order to advise the pope and others in the Roman Curia, the church's central administration.

Speaking specifically of the crisis in Syria and Iraq, where so-called Islamic State militants have captured large swaths of territory and driven out tens of thousands of Christians and members of other minority groups, Gallagher said he is hopeful for a resolution of the conflict.

"We hope that the negotiations that have begun will bear fruit, that there will be in these coming days a cessation of hostilities [and] the creation of humanitarian corridors," to get aid to suffering people, he said.

The United States, Russia and other countries hosted peace talks in Munich that led to the announcement Feb. 12 of a cessation of hostilities between government and rebel troops in Syria; military action against the Islamic State militants was expected to continue.

Gallagher said the Vatican and its diplomats are working with people on the ground to foster interreligious dialogue in the region as part of the peacemaking effort.

"We are not in dialogue with Daesh," as Islamic State is sometimes called, Gallagher said. "When I say interreligious dialogue, I mean bringing the various Christians and other religious traditions" together to harness their moral resources to face the suffering that comes from "the death and destruction of their homeland."

"Unfortunately, it's true that [with] the extremists, particularly extremists who are prepared to embrace violence and terrorism, one is completely at a loss to say what one can do with such people," he said.

Nevertheless, the archbishop stressed that "there will be an end to this conflict in Syria. It will take a lot of goodwill, a lot of sacrifice on the part many of the actors, but we have to bring it about. It must happen."

Francis has earned a reputation for taking risks with his own safety, for example, when in November he traveled to the Central African Republic, an active war zone. The pope's bold example has motivated church diplomats in perilous situations abroad to go and do likewise, the archbishop said.

"From the top, that example is being given," Gallagher said. Knowing the pope willingly puts his life in danger "inspires the rest of us to go the extra mile with him as well," he said.

A case in point is Archbishop Mario Zenari, the Vatican nuncio in war-torn Syria, Gallagher said.

Zenari, "throughout the whole of this conflict, has remained at his post and has made a very significant contribution" to the peacemaking effort that is underway, he said.

"If you have convictions and if you have, above all, faith, you are prepared to take risks," the archbishop said.

Contrasting the Vatican foreign service with NGOs and humanitarian missions, Gallagher said that Vatican diplomats stay with their assigned communities throughout the most tragic circumstances.

"Consistently, diplomats of the Holy See, we remain. We are in for the long haul. We don't give up easily," he said.

While Vatican diplomats are free to leave if they are in danger, the archbishop said, among them "we see a great deal of dedication and commitment and self-sacrifice."

Gallagher is careful to point out that ending the turmoil in the Middle East and other parts of the globe requires the participation not only of diplomats, but also of ordinary people.

"It's something in which we've all got to be engaged," he said.

"Whether it's a question of awareness," the archbishop said, or "for the Christian and religious people, whether we get on our knees and we beg God for peace, and encourage our politicians to negotiate," everyone must make an "extraordinary effort" to bring about world peace.