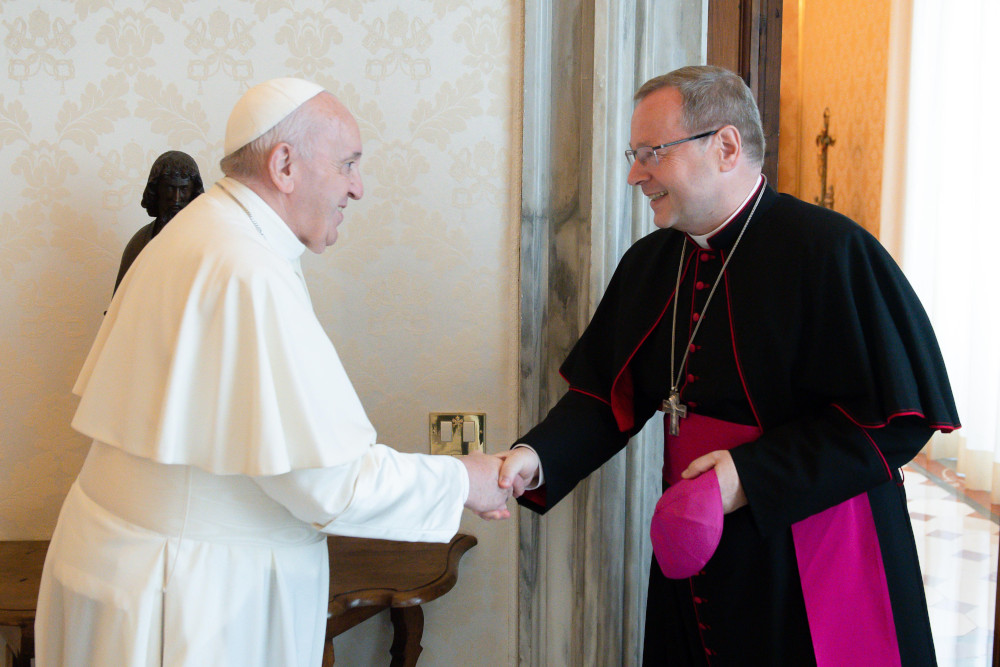 Pope Francis greets Bishop Georg Bätzing, president of the German bishops' conference, during an audience at the Vatican June 24, 2021. Bätzing said he assured the pope that German Catholics do not want to split from the church. (CNS/Vatican Media)

The president of the German bishops' conference said he personally assured Pope Francis that the Catholic Church in Germany does not want "to go its own way."

Bishop Georg Bätzing of Limburg, president of the conference, met Francis privately at the Vatican June 24 and issued a statement afterward.

"Our conversation focused first on the situation of the church in Germany in light of the processing of sexual abuse cases and the difficult situation in several dioceses," which have recently or are about to publish reports on the handling of abuse allegations, the bishop said. "Pope Francis is well aware of the situation of the church in Germany. He hopes that tensions can be overcome."

Bätzing also said he "informed the pope in detail" about the status of the German church's "Synodal Path" and "made it clear that the rumors that the church in Germany wants to go its own way are not true."

The decision by the German bishops and a national council of laity to design an ad hoc synodal process, different from a national synod or plenary council, and the decision to discuss issues of power, sexual morality, priestly life and the role of women in the church have led some people to comment that German Catholics were ignoring church procedures and were, perhaps, even headed for schism.

"Pope Francis encouraged us to continue on the Synodal Path, to discuss the questions at hand openly and honestly, and to come to recommendations for a change in the church's actions," the bishop said. "At the same time, he called for the church in Germany to help shape the path of synodality" that he asked Catholics in every nation to contribute to in preparation for the world Synod of Bishops in 2023.

"I feel strengthened by Pope Francis in my office as bishop of Limburg and in my task as president of the German bishops' conference," he said. "I am impressed by the balanced knowledge with which he perceives the situation of the church in Germany and puts the problems into words. Pope Francis will accompany the church in our country on the way out of the crisis."