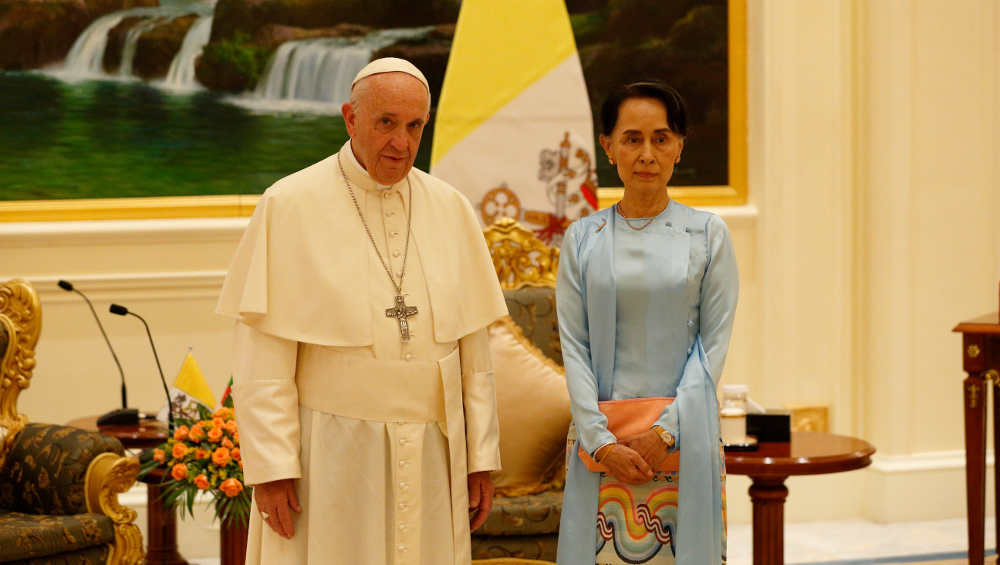 Pope Francis attempted to sidestep a diplomatic minefield in meetings with Myanmar's political leaders Nov. 28, declining to specifically name the majority Buddhist nation's ongoing persecution of a minority Rohingya Muslim population but also calling on the quasi-democratic state to respect the rights of all ethnic groups.

In a highly anticipated address to de facto Prime Minister Aung San Suu Kyi, a Nobel Peace Prize laureate facing international outcry after some 600,000 Rohingya fled violence from Myanmar's military, the pontiff did not specifically mention that violence but said the country's people suffer "from civil conflict and hostilities that have lasted all too long."

While refraining from naming the Muslim group explicitly, the pope also said that Myanmar's future must include "respect for each ethnic group and its identity." Shortly after reading that phrase to Suu Kyi and dozens of other political and military leaders at Myanmar's International Convention Center, Francis added: "none excluded."

Although human rights advocates had called on Francis to specifically name the Rohingya in speeches during his Nov. 27-30 visit to Myanmar, local church leaders have advised him to refrain while in the country from naming them for fear of reprisals from the country's military.

The military considers the Rohingya illegal migrants even though they have lived in Myanmar for generations.

Myanmar began a process of democratic reforms in 2015 after a half-century of military rule. But the armed forces still have substantial power in the nation, including control of 25 percent of the seats in Parliament and of the ministries of defense, home affairs and border affairs.

For her part, Suu Kyi also did not refer specifically to the Rohingya in an address welcoming Francis to Myanmar. But she did name the country's western state of Rakhine, where the U.N.'s top human rights official Zeid Ra'ad Al Hussein and U.S. Secretary of State Rex Tillerson have said Myanmar's military has committed "ethnic cleansing" against the Rohingya population there.

Suu Kyi, who holds the formal title of "State Counsellor," appeared to refer to Francis as a "good friend" seeking to help Myanmar succeed.

"As we address long standing issues -- social, economic and political -- that have eroded trust and understanding, harmony and cooperation between different communities in Rakhine, the support of our people and of good friends who only wish to see us succeed in our endeavors, has been invaluable," she said.

The meeting between Francis and Suu Kyi came on the second of Francis' four days in Myanmar, which he is visiting Nov. 27-30 before continuing on to Bangladesh, where the U.N. says some 600,000 Rohingya have gone to flee the violence.

The Myanmar military says it launched operations against the Rohingya earlier in the year following insurgent attacks in Rakhine, but international observers have pointed to attacks against entire villages as signs of the disproportionate nature of the fighting.

One respected analyst on Myanmar and the region had told NCR in an interview earlier in the month that it would be "disappointing" if Francis did not explicitly mention the Rohingya while in Myanmar.

"I don't see how the pope can not talk about the Rohingya and name them by name [without] appearing to condone the Myanmar government's position," said Lynn Kuok, who wrote a 2014 report on the country for the Center for Strategic and International Studies and is a nonresident fellow at Brookings Institution's Center for East Asia Policy Studies.

Yangon Cardinal Charles Bo has said frequently in recent days that he advised Francis to refrain from using the word Rohingya while in Myanmar because the military views the term as inflammatory. The cardinal reiterated his advice in a Nov. 25 interview with Vatican Radio, saying the pope "has to be very careful about what terms he will use."

Francis traveled Nov. 28 from Myanmar's traditional capital of Yangon to Naypyidaw, a purpose-built city that became the country's capital in 2006. Constructed by Myanmar's military partially to prevent the possibility of protest or insurrection against the government, Naypyidaw has the feel of an expensive, modern ghost town.

When the Vatican press plane arrived at the international airport, there were numerous shops and amenities but few other travelers and only one other plane seen among dozens of jet bridges. The road from the airport to the conference center was an eight-lane highway; the press bus encountered less than a dozen vehicles in the 20-minute trip.

In his public address, the pope told the country's political leaders: "The future of Myanmar must be peace, a peace based on respect for the dignity and rights of each member of society, respect for each ethnic group and its identity, respect for the rule of law, and respect for a democratic order that enables each individual and every group – none excluded – to offer its legitimate contribution to the common good."

Francis met earlier in the morning for about 30 minutes with about 20 other religious leaders, including several Buddhists, Muslims, and Hindus; and an Anglican, a Baptist, and a representative of the Jewish community.

Myanmar is estimated to be about 90 percent Buddhist. According to the Vatican's 2015 statistics, the latest available, the country has about 659,000 Catholics out of a population of some 52 million. 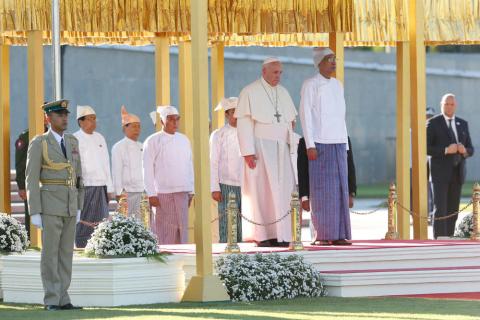 The pope told the other religious leaders that they should work for unity, but that unity is different from uniformity.

"We are all different and every religious faith has its riches, its traditions; riches to share," said the pontiff. "Peace is constructed in a chorus of differences. Unity is always made through differences."

The pope noted that one of the other religious leaders spoke about seeking harmony.

After the joint inter-religious meeting, Francis also met briefly with Sitagu Sayadaw, a popular but controversial Buddhist meditiation teacher and scholar who has defended the actions of Myanmar's military against the Rohingya.

Francis arrived in Myanmar Nov. 27 after a ten-hour overnight flight from Rome. Almost immediately upon arrival, the pontiff made a change to his schedule for his visit, moving ahead a meeting with Myanmar's top military leader by three days and making the encounter his first official appointment in the country.

The pope met Senior General Min Aung Hlaing for what the Vatican called a 15-minute courtesy visit. Spokesman Greg Burke said Francis and Hlaing "spoke of the great responsibility of the country's authorities in this moment of transition."

In a Facebook post later in the evening, Hlaing said he had told the pontiff  "Myanmar has no religious discrimination at all" and that his military "performs for the peace and stability of the country." He added that there is "no discrimination between ethnic groups in Myanmar."

Francis will return to Yangon later Nov. 28 and will continue his visit to Myanmar Nov. 29 by celebrating an outdoor Mass, meeting with the country's bishops, and speaking to the state-controlled supreme council of Myanmar's Sangha Buddhists.

The Vatican announced Francis' visit to Myanmar and Bangladesh Aug. 28, before full details of Myanmar military's operation against the Rohingya were known. The trip was initially seen as a way for Francis -- who had the Vatican establish full diplomatic relations with Myanmar for the first time in May after a visit to Rome by Suu Kyi -- to support the country's transition to democracy.

The pope has spoken specifically about Myanmar's treatment of the Rohingya in the past. In remarks following his weekly Sunday Angelus prayer in St. Peter's Square Aug. 27, for example, he said he had learned of the "persecution" of "our Rohingya brothers and sisters" and asked for prayer that they would be "given their full rights."

Francis is to travel Nov. 30 to Bangladesh, before returning to Rome Dec. 2.