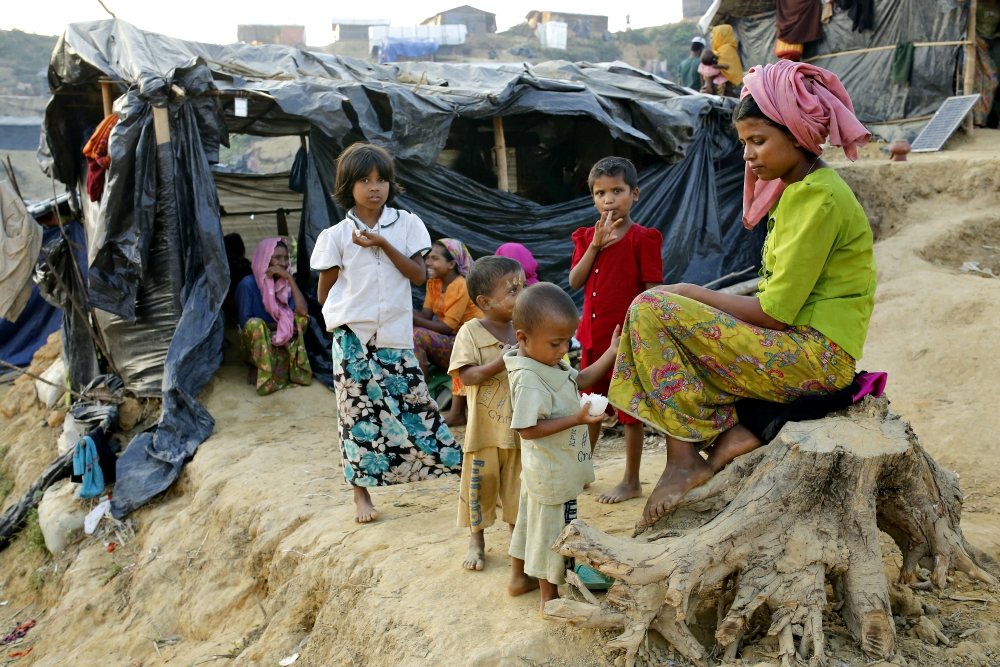 A Rohingya family sits outside their tent Nov. 20 at a refugee camp in Cox's Bazar, Bangladesh. (CNS/EPA/Abir Abdullah)

Pope Francis has said he chose not to publicly refer to Myanmar's persecuted Rohingya Muslim minority while traveling in the quasi-democratic state Nov. 27-30 in an effort to increase the chances its leaders would heed his words in their private meetings together.

In an hourlong press conference aboard the papal flight to Rome Dec. 2, he contrasted his decision with that of a teenager who "can say what they think, slamming the door in the face of another."

"I am interested in getting the message across," said the pope. "I did not have the pleasure of slamming the door in their face publicly with a condemnation but I had the satisfaction to dialogue, to speak with the other, to say my piece. This way, the message got across."

Francis said he was "very, very satisfied" with the separate meetings he held with de facto Prime Minister Aung San Suu Kyi, President Htin Kyaw, and Senior Gen. Min Aung Hlaing, whose forces have been accused by the U.S. and the U.N. of committing "ethnic cleansing" against the Rohingya.

While the pope said he would not discuss specifically what he told Hlaing in their Nov. 27 encounter, he said: "I did not negotiate with the truth."

"I did it a way that he understood a bit that the path that was gone down in ugly times, renewed today, is not viable," said the pope. "It was a good meeting, civilized, and even there the message got across."

Asked if he had used the word Rohingya in the meeting with the general, Francis said: "I used words to get the message across. And when I saw that he had accepted the message, I dared to say everything I wanted to say."

Francis spoke about the Rohingya as part of a press conference in which he also inferred that the global political system has become irrational, describing his decision last month to shift papal teaching away from an acceptance of nuclear deterrence as partly due to the world's instability.

Most of the questions during the press conference dealt specifically with the pope's visit abroad, by his request. After hearing the query about nuclear weapons, he said he would answer it but that he would prefer then to answer questions about his trip. 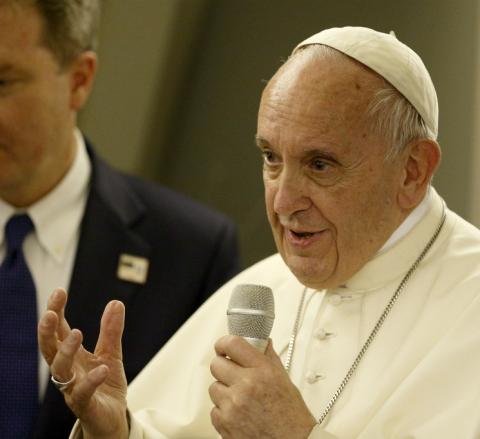 Francis traveled to Myanmar as part of a two-country tour that also included a Nov. 30-Dec. 2 visit to Bangladesh, which the U.N. says is housing some 600,000 Rohingya refugees.

The pope came under criticism in Myanmar for not mentioning the Rohingya during a Nov. 28 address to Suu Kyi, although he did tell her that the country's future must include "respect for each ethnic group and its identity."

But in a moving encounter with 16 Rohingya refugees in Bangladesh Dec. 1, he asked their forgiveness for the "world's indifference" to their plight and said: "The presence of God today is also called Rohingya."

During the press conference, Francis said that meeting with refugees was a "condition of the trip for me." He also described his feelings as he talked with the 12 men, two women and two young girls for several minutes each.

"Having heard them one-by-one ... I began to feel something inside: I cannot let them leave without saying something," the pope recalled. "I asked for the microphone.

"I began to speak," he said. "I do not remember what I said. I know that at a certain point I asked forgiveness. Maybe two times, I don't remember."

"In that moment, I was crying but trying to hide it," he said. "They were crying, too."

The pope was also asked about the international criticism Suu Kyi, a Nobel Peace Prize laureate, has faced due to her country's treatment of the Rohingya. He called Myanmar, which began a process in 2015 of emerging from a half-century of military rule, "a nation in transition."

"The possibilities must be judged also through this optic," he said. "In this moment of transition, would it have been possible or not to do this or that?"

Francis said that, after meeting with Myanmar's leaders, his overall analysis of the situation in the country was that "it will not be easy to go ahead in a constructive way and it will not be easy for someone who wants to go backward."

Francis also replied to a question about how the original plans for his Nov. 27-Dec. 2 visit included a stop in India. He said it was "providential" that those plans did not work out because, due to its size and various cultural identities, "India deserves its own visit."