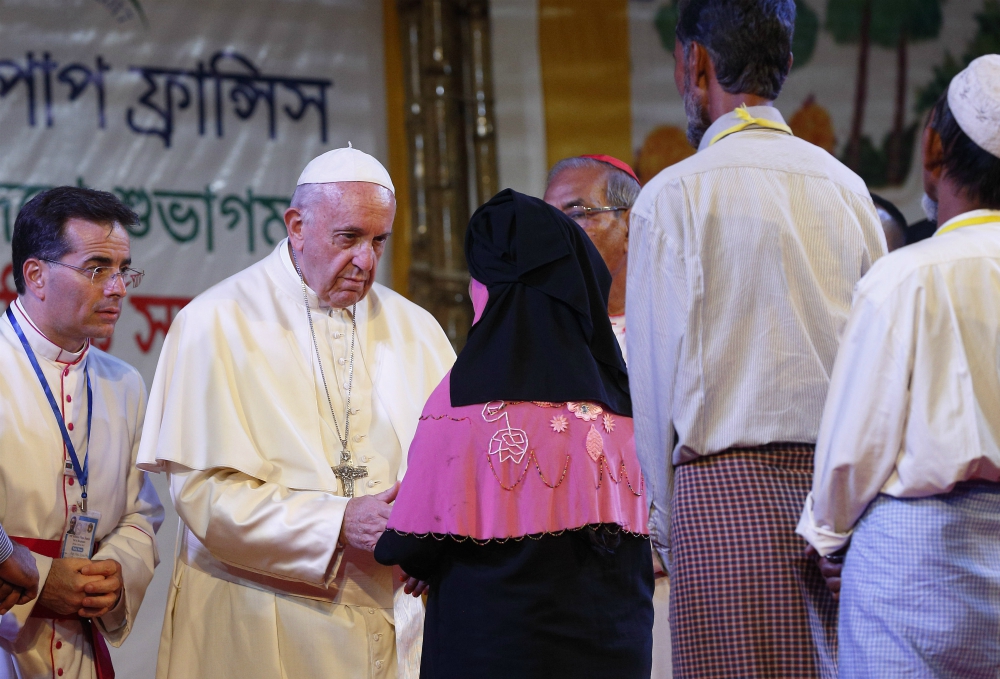 Pope Francis meets Rohingya refugees from Myanmar during an interreligious and ecumenical meeting for peace in the garden of the archbishop's residence in Dhaka, Bangladesh, Dec. 1. (CNS/Paul Haring)

One-by-one, Pope Francis took the hands of 16 Rohingya Muslim refugees. After fleeing killings and persecution in neighboring Myanmar, they told him their stories. Spending several minutes with each, he looked in their eyes as he listened.

Then, in brief unscheduled remarks at an interreligious meeting here Dec. 1, he told those watching on that each of the refugees carry within them the divine presence.

"A tradition in your religion says that God at the beginning took a bit of salt, put it in water and created the souls of all people," Francis said, referring to an Islamic creation story. "And everyone one of us carries a bit of the divine salt inside."

"These brothers and sisters carry the salt of God within them," he said, before adding, to gasps of shock: "The presence of God today is also called Rohingya."

He called on those with him at the Dhaka archbishop's residence to "show the world what its selfishness is doing to the image of God."

"Let us continue to work so that [the Rohingya's] rights' are recognized," said the pope. "Let us not close our hearts. Let us not look the other way."

Francis met the Rohingya refugees at the end of an emotional gathering on the fifth of his six-day visit to Myanmar and Bangladesh, during which he has attracted criticism for not directly addressing the situation of the some 600,000 refugees the U.N. says have fled violence from Myanmar's military.

On Dec. 1, after grasping hands with the 12 men, two women, and two young girls in Dhaka, the pope told them: "It is little that we can do because your tragedy is so great." He then asked forgiveness "in the name of all those who have persecuted you or done you wrong" and for "the world's indifference."

As Francis spoke the last words, some of the refugees were visibly crying.

The pope had come under criticism in Myanmar for not mentioning the Rohingya during a Nov. 28 address to de facto Prime Minister Aung San Suu Kyi, although he did tell her that the country's future must include "respect for each ethnic group and its identity."

In a press conference Nov. 29, Vatican spokesman Greg Burke indicated the pope might have spoken about the refugees during his private meeting with Suu Kyi.

In brief interviews before Francis spoke to them, two of the Rohingya had said they were hoping the pope would mention them by name.

Mohammed Ayub, who said his 3-year-old son was killed by the Myanmar military, said simply: "He should say the word, as we are Rohingya."

Abdul Fyez, who said his brother had been killed, said: "We have been Rohingya for generations."

Several of the other religious and civil leaders at the event Dec. 1, who spoke before Francis met the Rohingya, praised the pope's role in calling attention to their plight.

Farid Uddin Masud, a Muslim mufti and imam, said Francis is a "great inspiration" and is "making tireless efforts to foster and promote humanity."

"[The pope's] strong support for the Rohingya will bring a positive result in regard to the attempts to ensure their human rights," said the scholar, according to a Vatican translation of his prepared Bengali text. "On behalf of people of all creeds, we pay our tribute and show respect to him."

Anisuzzaman, a noted professor of Bengali literature at the University of Dhaka, said people in Bangladesh have a sense of "great relief" that the pope has spoken about the Rohingya.

"The international community must come forward to their help and to stop this mindless act that deprives them of the dignity that people deserve," said the professor. "We trust that the pope's visit to Myanmar will cause the rulers of the country to search their souls and put an end to the violence that engulfs a section of their own people."

Both the U.S. and the U.N. have termed Buddhist-majority Myanmar's treatment of the Rohingya minority, which has included apparent destruction of entire villages, an "ethnic cleansing."

Although Francis has referred to Myanmar's actions as a "persecution" in the past, church leaders in the country advised him to refrain from explicitly naming the Rohingya while visiting for fear of reprisals from the military, which wields significant power in the nation.

In a meeting with Bangladeshi President Abdul Hamid Nov. 30, the pope did not call the Rohingya by name but did urge the international community to "take decisive measures" to care for the refugees from Rakhine state, the area in Myanmar from where most of the Rohingya have fled. 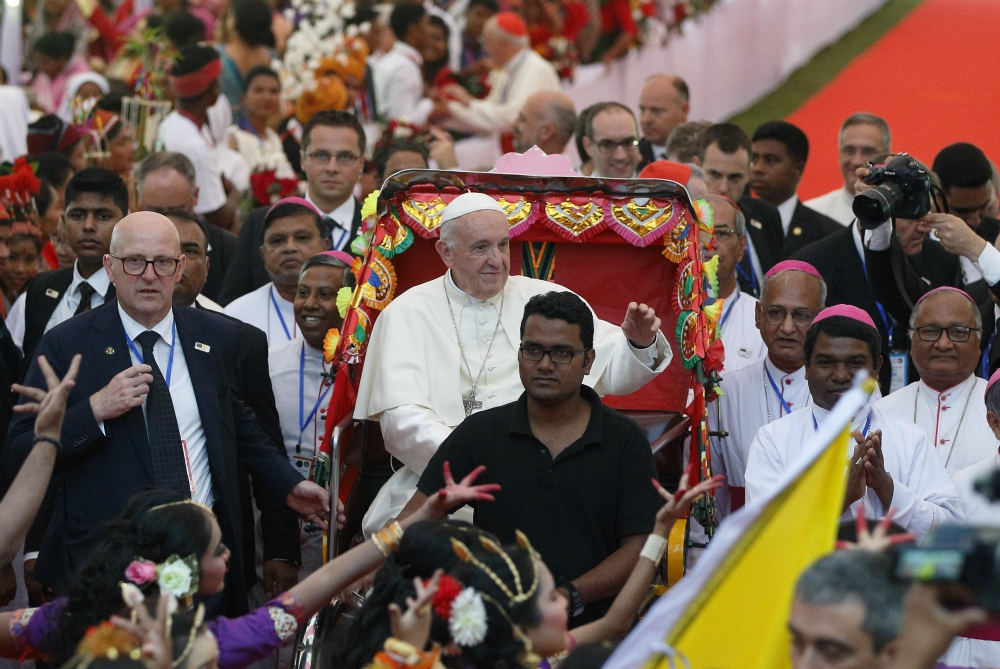 Pope Francis rides in a rickshaw as he arrives for an interreligious and ecumenical meeting for peace in the garden of the archbishop's residence in Dhaka, Bangladesh, Dec. 1. (CNS/Paul Haring)

Francis arrived at the interreligious meeting Dec. 1 on Bangladeshi transport: a special gold-and-red-accented tricycle rickshaw. His driver pushed the vehicle over a red carpet for about a football-field's length as the pope waved and greeted people gathered along the entryway.

Rhythmic Bengali chant music played as the pope rode the tricycle to the venue for the encounter, an ornately decorated tent structure in the garden of the Dhaka archbishop's residence. A Muslim adzhan call to prayer from a nearby mosque could also be heard for the daily Maghrib prayer during Masud's address.

Earlier on Dec. 1, Francis celebrated a Mass for Bangladesh's small Catholic community and ordained 16 new priests for the country.

Speaking to tens of thousands gathered at Dhaka's Suhrawardy Udyan Park, a former British military club and horseracing track, the pope read the ritual homily from the rite of ordination for priests, which focuses on the meaning of the different ministries exercised by pastors.

He then spoke extemporaneously for a few minutes from the thatched-roof structure of the simple altar platform, which was decorated with pink and blue bunting. He thanked those in the crowd who had traveled across the country to be present for the event and told them to "pray always" for their priests, saying the prayers of laypeople sustain their ministers.

A festive but respectful atmosphere marked the Mass. Most in the crowd appeared to be in their 20s and 30s; many broke into Bengali songs at frequent intervals as Francis arrived, but all quieted immediately when told over loudspeakers it was time to prepare for the celebration. 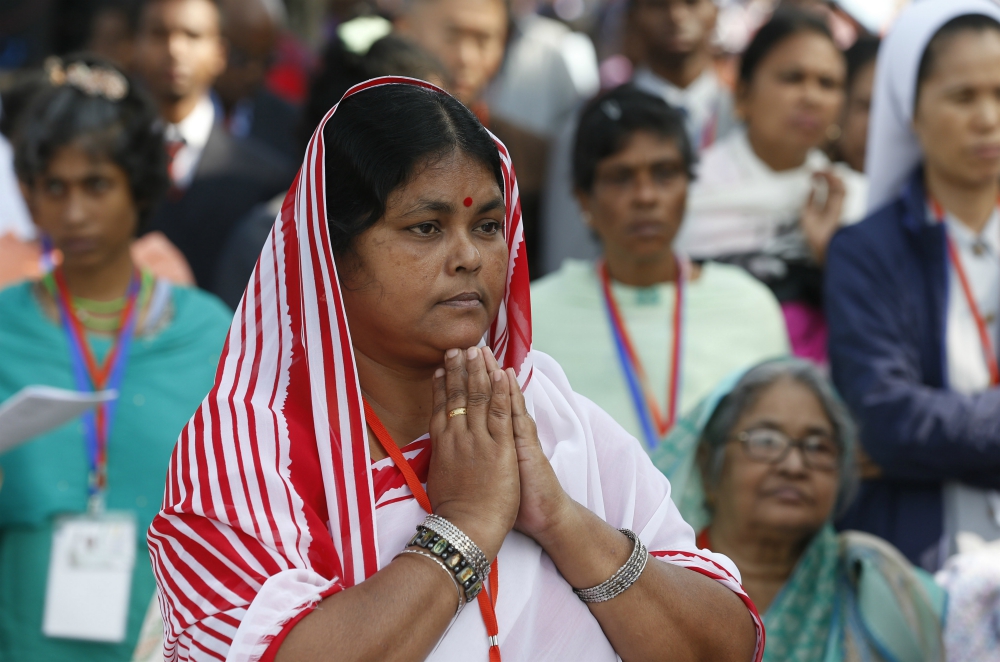 A woman prays as Pope Francis celebrates Mass and the ordination of priests in Suhrawardy Udyan park in Dhaka, Bangladesh, Dec. 1. (CNS/Paul Haring)

As Francis arrived at the park, he went around the crowd in the popemobile while wearing a long flower garland necklace. He reached out at several points to grab peoples' hands or wave.

The 16 new priests represent a significant increase in the Catholic presence in Muslim-majority Bangladesh. Among a population of some 163 million, Bangladesh has about 375,000 Catholics. Before the Dec. 1 ordinations, it had 372 priests, according to Vatican figures.

Later in the day, the pope also spoke to Bangladesh's 10 bishops, asking them to "recognize and value" the charisms of laywomen and laymen. Noting that only half of the world's Catholic dioceses have lay advisers on matters concerning economic and canonical issues, he said laypersons should be more involved in the church's administration.

Francis also praised the Bangladeshi church's charitable work and called on them to tend relationships with other religions in the country.

"Work unremittingly to build bridges and to foster dialogue, for these efforts not only facilitate communication between different religious groups, but also awaken the spiritual energies needed for the work of nation building in unity, justice and peace," he told the prelates.

Francis is to continue his trip to Bangladesh Dec. 2 by making a visit to the house St. Mother Teresa would use when she stayed in Dhaka and then having meetings with priests, religious and young people. The pope is to return to Rome late in the evening.