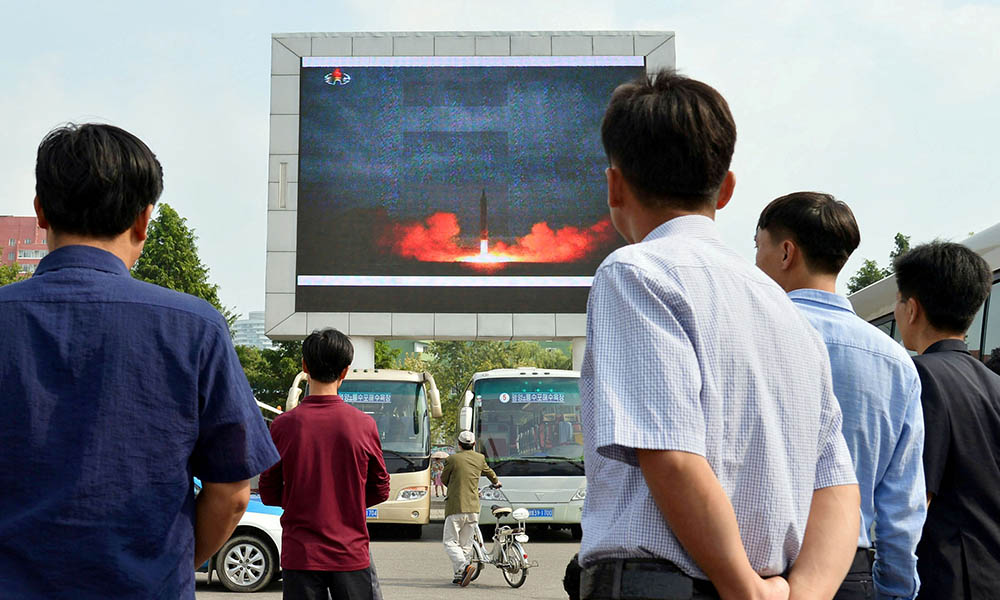 Pope Francis has inferred that the global political system has become irrational, describing his decision last month to shift papal teaching away from an acceptance of nuclear deterrence as partly due to the world's instability.

In an hour-long press conference aboard the papal flight to Rome Dec. 2, the pontiff also said it is his "convinced opinion" that the world is "at the limit of licitly having and using nuclear weapons."

Asked what about the world situation had changed that caused him to break with the church's previous acceptance of nuclear deterrence, and if recent saber-rattling between U.S. President Donald Trump and North Korea's Kim Jong Un had played a role, the pope replied: "What has changed is the irrationality." 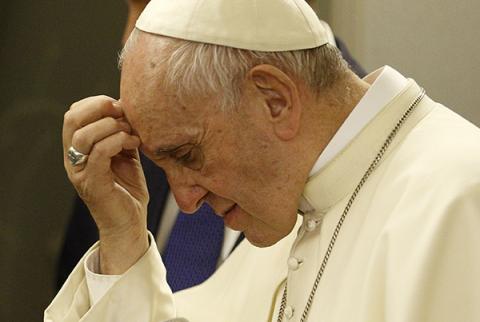 Pope Francis pauses as he answers questions from journalists aboard his flight from Dhaka, Bangladesh, to Rome Dec. 2. (CNS/Paul Haring)

Comparing his Nov. 10 statement that the "very possession" of nuclear weapons is to be "firmly condemned" to Pope John Paul II's determination in 1982 that deterrence was "morally acceptable," Francis said: "Many years have passed since the time of John Paul II."

"Today, we are at the limit," the pontiff continued. "Why? Because with nuclear arsenals that are so sophisticated today, the destruction of humanity is at risk, or at least the great part of humanity."

Francis then told journalists he wanted to ask a question "not as part of the papal magisterium, but [as] a question made by a pope."

"Today, is it licit to maintain nuclear arsenals as they are?" he asked. "Or, today, to save creation, to save humanity, is it not necessary to go backwards?"

Francis spoke about deterrence as part of a press conference in which he also detailed his reasoning for not referring directly to the persecution of Rohingya Muslims for most of his Nov. 27-Dec. 2 visit to Myanmar and Bangladesh.

Related: Francis: 'I did not negotiate with the truth' with Myanmar general

The question about nuclear weapons was the fourth in the conference, but the only one concerning matters other than the foreign visit. After hearing the query, the pope said he would answer it but that he would prefer then to answer questions about his trip.

The pope condemned the possession of nuclear weapons in an address to a conference hosted by the Vatican to follow up on a new U.N. treaty, signed by 122 countries, that calls for the complete elimination of nuclear arsenals.

While previous pontiffs have called for nuclear abolition, they also granted conditional moral acceptance to the policy of deterrence, which arose after World War II when the U.S. and the Soviet Union stockpiled nuclear weapons in order to discourage either country from launching an atomic attack.

In 1982, John Paul II sent a letter to the Second Special Session of the United Nations General Assembly Devoted to Disarmament saying that because of the need for defensive balance, deterrence was acceptable "as a step on the way toward a progressive disarmament."

The U.S. bishops adopted John Paul II's calculation in their landmark 1983 pastoral letter "The Challenge of Peace: God's Promise and Our Response," offering a "strictly conditioned moral acceptance" of deterrence.

North Korea said this week it had tested a new ballistic missile with an operative range that includes most of the U.S.

This story appears in the Francis in Myanmar and Bangladesh feature series. View the full series.
A version of this story appeared in the Dec 15-28, 2017 print issue under the headline: Global 'irrationality' motivates shift on deterrence.