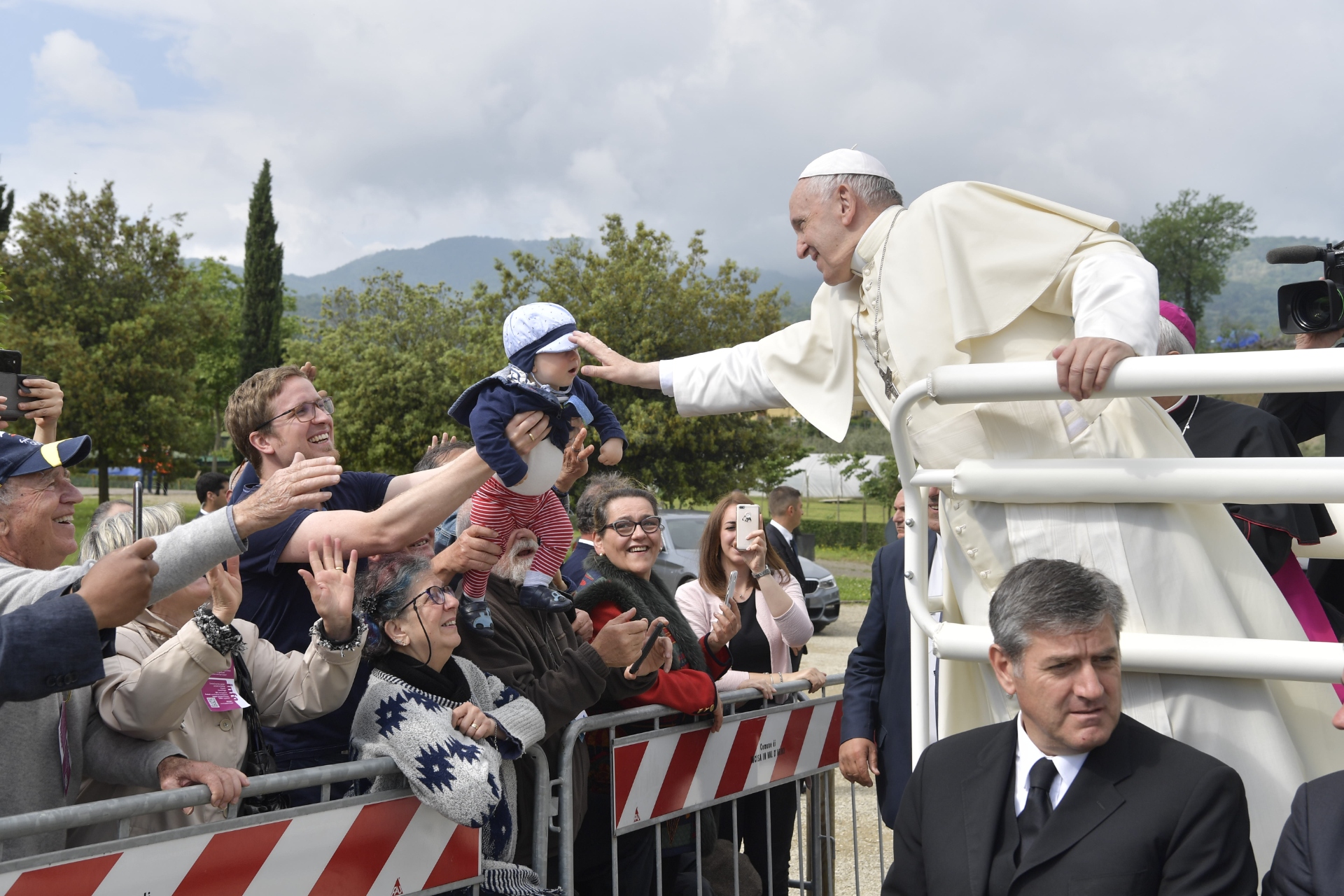 Pope Francis blesses a toddler in Loppiano, Italy, May 10. He encouraged the members and friends of the Focolare movement to hold true to their founders' missions and Jesus' example of being close to the people. (CNS/Vatican Media)

During a quick morning visit to Tuscany, Pope Francis praised two lay communities there that are dedicated to living out the Gospel values of reciprocal love and cooperation.

Meeting families and children who live a communal way of life in Nomadelfia, near Grosseto, and members and friends of the Focolare movement in Loppiano, near Florence, May 10, the pope encouraged them to hold true to their founders' missions and Jesus' example of being close to the people.

He also reminded people of the upcoming feast he recently decreed, the feast of the Blessed Virgin Mary, Mother of the Church, to be celebrated May 21, the Monday after Pentecost.

"Don't forget that Mary was a layperson," he said. "Jesus' first disciple was lay," and this should be a great inspiration to all laypeople.

"I challenge you" to look in the Gospels and see how Mary lives and responds to Jesus, particularly during the most difficult moments in life, he told the thousands of mostly laypeople gathered in Loppiano.

Then, he said, as life unfolds, and a response is needed, ask, "What would Mary do?" Mary was faithful, courageous, patient and creative, and she is a good "school" for learning to know Jesus better, living with him and seeing him "in each one of us and among us."

The pope began the morning with an early helicopter ride to Nomadelfia, a community — whose name means "the law of fraternity" — founded by the late Fr. Zeno Saltini.

Families in the community seek to embrace the lifestyle of the early Christians by living together and renouncing all personal possessions. And the community takes in orphans, abandoned children and marginalized young people, entrusting them to families or to "mothers by vocation'' — laywomen who do not marry but raise many of the adopted children.

During his visit, Pope Francis entrusted two children to their new families, according to the community's tradition by pronouncing Jesus' last words on the cross to Mary and John: "Woman, behold your son... behold your mother."

The community lives a special sense of family as being rooted in Christ, not "blood-line," the pope said. And they show that what it is like to live where the language is love, and "there is no room for isolation and loneliness," but only collaboration and Christian witness.

Afterward, the pope went by helicopter to the Focolare movement's "little town" of Loppiano where about 850 people from 65 different nations live, and more than 30,000 people visit each year.

Though the movement is Catholic, the community welcomes people from all faiths as it seeks to be a model of how to build unity in diversity, Maria Voce, Focolare president, told the pope.

The movement's founder, the late Chiara Lubich, wanted to create little towns, examples of peaceful coexistence based on the Gospel value of mutual love, she said, adding that there are more than 24 other similar "towns" throughout the world.

The pope reminded community members that theirs is still a young movement, inspired by the Second Vatican Council. However, they must continually keep the memory of their roots alive if they are to keep harvesting fruit for the future.

Be respectfully and tenderly sincere and frank, and don't be afraid or lazy, he told them.

Be patient and learn to persevere in life's difficulties, he said. Being steadfast and patient "always creates hope and hope never disappoints, never."

And don't forget to retain a good sense of humor, said the pope, who threw out a number of "one-liners" during the encounter, including a false warning that his speech to them was 14 pages long. It was four pages long.

No matter how busy, how demanding, how difficult the day, keep smiling and finding ways to make others smile, too, he said. "The grace of a sense of humor gets you closer to God's grace."