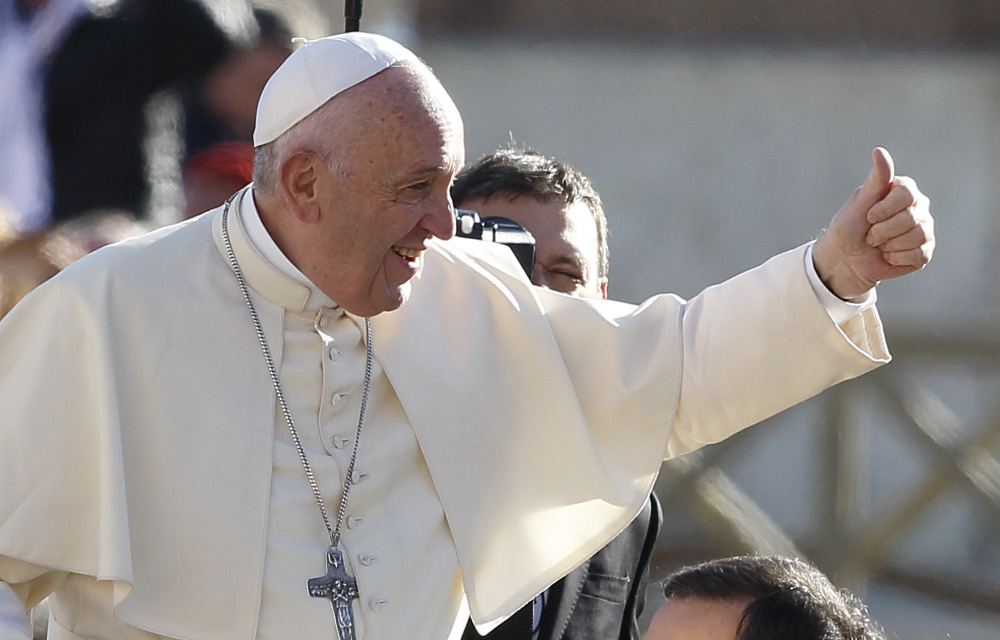 Pope Francis gives a thumbs up during his general audience in St. Peter's Square at the Vatican Oct. 25. (CNS/Paul Haring)

Working for economic growth based on increased consumption without concern for creating dignified jobs and protecting the environment "is a bit like riding a bicycle with a flat tire: It's dangerous," Pope Francis said.

The dignity of workers and the health of the environment "are mortified when workers are just a line on a balance sheet, when the cries of the discarded are ignored," he said Oct. 26 in a video message.

Addressing participants at a weeklong Italian conference on Catholic social teaching, Pope Francis noted how many people in the Bible are defined by their work: sowers, harvesters, vine dressers, fishers, shepherds and carpenters, like St. Joseph.

Work can give people dignity by allowing them to use their talents to support themselves and their families and contribute to society, the pope said. But "there are jobs that humiliate human dignity" like prostitution and child labor or "offend the worker's dignity," like jobs that pay under the table, offer only a series of temporary contracts or do not pay enough attention to worker safety.

"This is immoral," the pope said. "This kills. It kills dignity, kills health, kills the family, kills society."

Pope Francis noted that Catholic social teaching formally began in 1891 with Pope Leo XIII's encyclical "Rerum Novarum," which he said was written to "defend workers" from exploitation and to combat child labor, 12-hour workdays and poor working conditions in factories.

The church's concern for workers continues today, he said, and extends to those without work, those who are so discouraged they have stopped looking for a job, those who are underemployed and those who live in fear of losing their jobs.

The economy is part of human life, not some autonomous machine, and so it must be regulated either by governments or by input from people who know that making money is not the highest human value, he said.

And, he said, governments have a role to play as well. Using the example of taking bids for public works, Pope Francis said governments cannot focus only on getting the lowest bid "without taking into account the dignity of labor as well as the environmental and fiscal responsibility of the company."