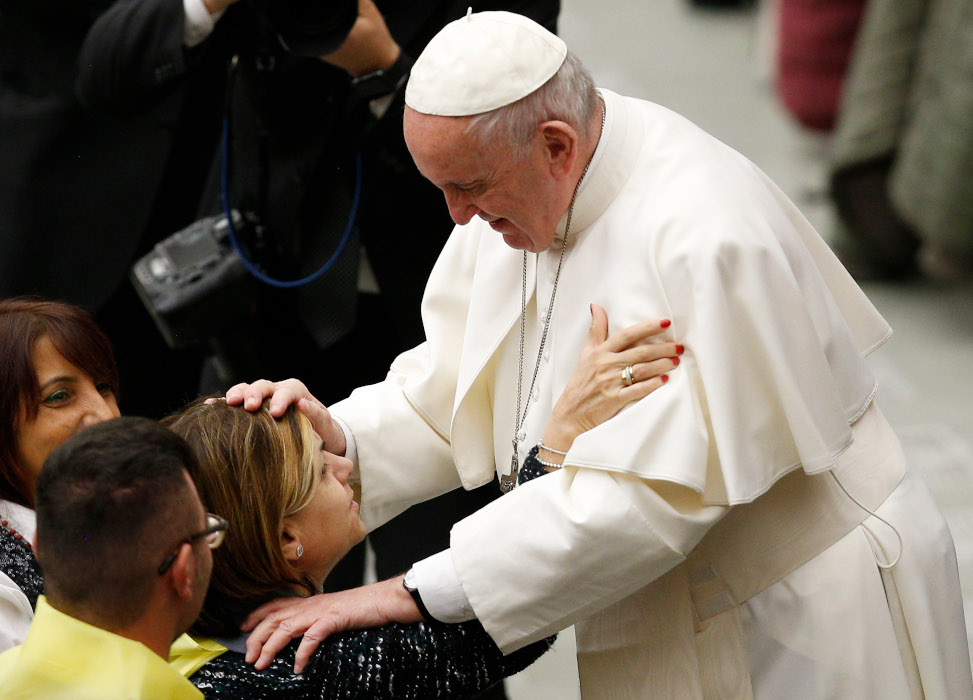 Pope Francis greets a woman as he meets the disabled during his general audience in Paul VI hall at the Vatican Jan. 15, 2020. (CNS/Paul Haring)

A true apostle is one who continues to be a courageous and joyful evangelizer even in the face of persecution and certain death, Pope Francis said.

By choosing to close the Acts of the Apostles not with St. Paul's martyrdom but with his continuing to preach the Gospel even while under house arrest, St. Luke wanted to show that the word of God cannot be "enchained," the pope said Jan. 15 during his weekly general audience.

"This house open to all hearts is the image of the church which — although persecuted, misunderstood and chained — never tires of welcoming with a motherly heart every man and woman to proclaim to them the love of the Father who made himself visible in Jesus," he said.

The pope concluded his series of talks on the Acts of the Apostles with a reflection on St. Paul's imprisonment in Rome.

St. Paul's treacherous journey and adventures to "the heart of the empire," he said, did not weaken the Gospel he preached but instead strengthened it by "showing that the direction of events does not belong to men but to the Holy Spirit, who gives fruitfulness to the church's missionary action."

During his imprisonment, the pope continued, the apostle would meet with notable Jewish people in his efforts to show "the fulfillment of the promises made to the chosen people" through Christ's death and resurrection.

While not everyone was convinced by his preaching, St. Paul continued to welcome anyone "who wanted to receive the proclamation of the kingdom of God and to know Christ," which is a grace that all Christians should pray for, he said.

May the Lord "enable us, like Paul, to imbue our houses with the Gospel and to make them cenacles of fraternity, where we can welcome the living Christ, who comes to meet us in every person and in every age," Francis said.