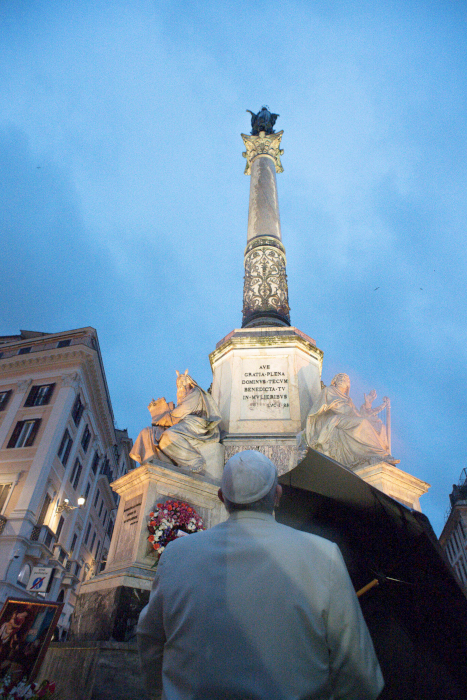 Pope Francis prays beneath the statue of the Virgin Mary on the occasion of Immaculate Conception day, at the Spanish Steps, in Rome, Tuesday, Dec. 8, 2020. Pope Francis paid a surprise visit to the statue early Tuesday after last week the Vatican announced that due to the COVID-19 pandemic his annual pilgrimage to the statue in the center of Rome would be cancelled to avoid contagion due to gatherings. (Vatican News via AP) 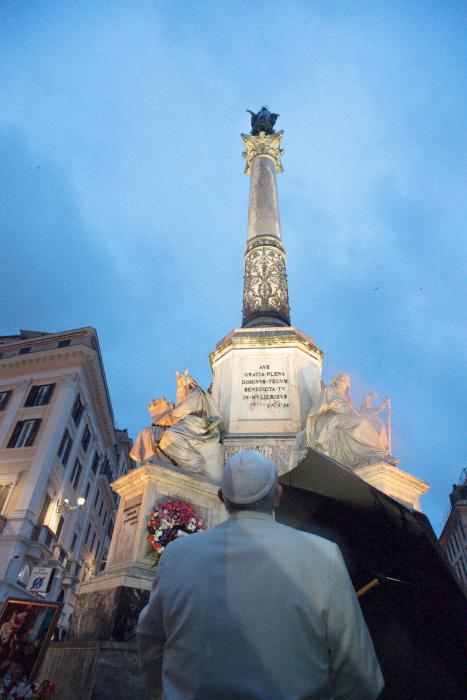 Pope Francis prays beneath the statue of the Virgin Mary on the occasion of Immaculate Conception day, at the Spanish Steps, in Rome, Tuesday, Dec. 8, 2020. Pope Francis paid a surprise visit to the statue early Tuesday after last week the Vatican announced that due to the COVID-19 pandemic his annual pilgrimage to the statue in the center of Rome would be cancelled to avoid contagion due to gatherings. (Vatican News via AP)

Pope Francis on Dec. 8 made a surprise early morning visit to the Spanish Steps in Rome to pray for people worldwide struggling in the pandemic.

The Vatican last week said that due to social distancing concerns Francis was canceling the traditional Dec. 8 afternoon visit to the square that draws big crowds.

Instead, with rain falling and dawn breaking, Francis popped up in the square at the foot of the Spanish Steps at 7 a.m. (0600 GMT), two hours after the end of Italy's overnight curfew.

Francis left a bouquet of white roses at the base of a towering column which is topped by a statue of the Virgin Mary, prayed, and less than 15 minutes later, left.

Except possibly for some dog-walkers and other early risers, few people were out and about in downtown Rome at that hour, since Dec. 8, a day devoted to Mary, is an official holiday in Italy, as well as at the Vatican.

Francis "turned to her [Mary] in prayer, so that she may keep watch with love over Rome and its inhabitants, entrusting to her all those in this city and the world who are afflicted by the [COVID-19] illness and are discouraged," Vatican spokesman Matteo Bruni said in a statement.

Before heading back to Vatican City, where he resides in a hotel, Francis stopped to pray some more and celebrate Mass in St. Mary Major Basilica in Rome.

Early in the pandemic, Francis made a similar pop-up visit to a little-frequented church in the heart of downtown Rome to pray, startling the few Romans who were in the area during exceptionally tight lockdown measures. 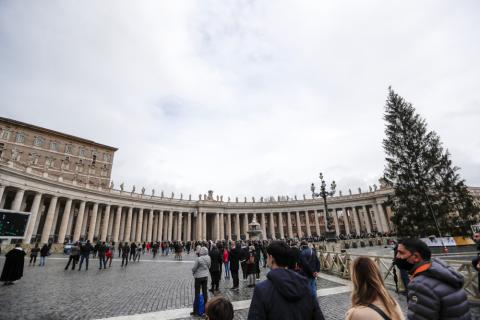 People follow Pope Francis as he recites the Angelus noon prayer from the window of his studio, second from right, overlooking St.Peter's Square, on the occasion of the Immaculate Conception day, at the Vatican, Tuesday, Dec. 8, 2020. (AP/Andrew Medichini)

The early December holiday traditionally marks the start of Christmas shopping in Rome, and thousands of Romans and tourists normally would throng the narrow streets near the Spanish Steps which are lined by elegant stores to catch a glimpse of the pope.

But pandemic travel restrictions have caused tourism to dwindle to a trickle this fall. As Italy battles a second surge of coronavirus, the government is continuing its ordinances against crowding in public that could facilitate transmission of the virus.

Francis cited those official restrictions against crowding when he later greeted people who braved rainfall in St. Peter's Square to receive his blessing, which he delivered from a window of the Apostolic Palace.

"We have to obey," Francis said, explaining publicly why he decided to forgo the afternoon appearance in the Italian capital.

In separate, written comments, Francis stressed the need for all to have employment when the world emerges from the pandemic.

He noted that unemployment has reached "record levels even in nations that for decades have enjoyed a certain degree of prosperity."

"How can we speak of human dignity without working to ensure that everyone is able to earn a decent living?" the pope wrote. He urged people to "find ways to express our firm conviction that no person, no person at all, no family should be without work."

As he has previously during the pandemic, the pope praised what he called the "ordinary people" who have kept the world functioning as it reels under the strain of the global pandemic. He cited those providing essential services — health care workers and shopkeepers, cleaners and caregivers and "so very many others."