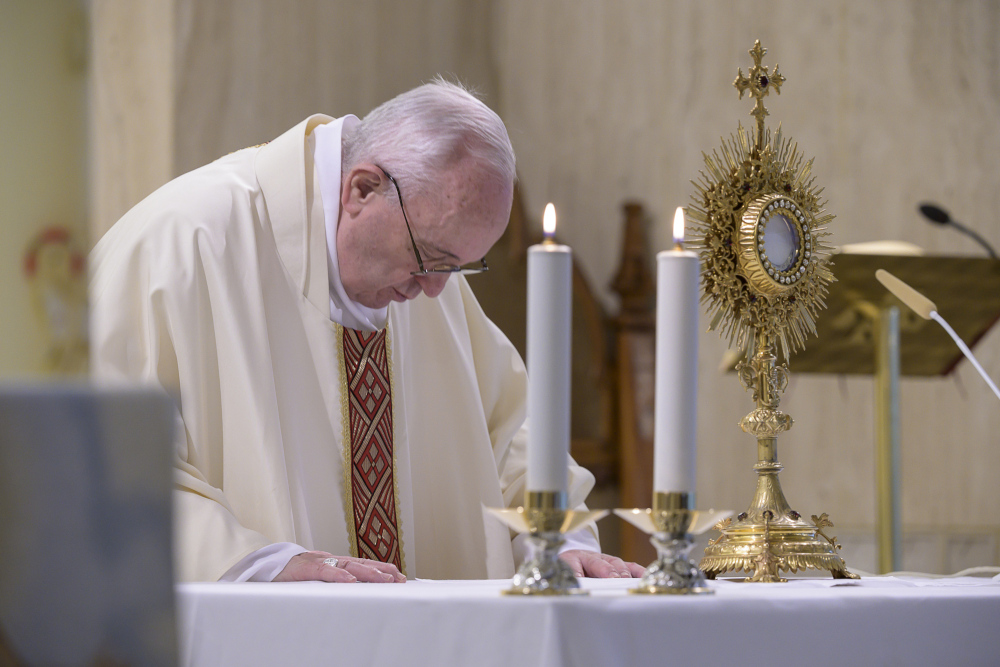 Pope Francis celebrates Mass April 30, 2020, in the chapel of his Vatican residence, the Domus Sanctae Marthae. At the start of the Mass, the pope prayed for the unknown victims who died from the coronavirus and were buried in common graves. (CNS/Vatican Media)

With the coronavirus pandemic forcing many countries to dig mass graves for countless victims, Pope Francis offered his daily morning Mass for the deceased who remain unknown.

"Let us pray for the dead, those who have died from the pandemic," the pope said April 30 at the start of the livestreamed Mass in the chapel of his residence, the Domus Sanctae Marthae.

"And let us also pray in a special way for the 'anonymous' dead. We have seen photos of common graves. There are so many there," he said.

With death tolls climbing, funeral directors and cemeteries have been struggling to cope with the increased number of bodies to bury.

According to a report April 16 in The Washington Post, burials in New York City's Hart Island — the largest public cemetery in the United States reserved for unclaimed dead — have quintupled since the start of the outbreak.

Drone images of workers in white hazmat suits stacking rows of unmarked coffins in a large trench caught the attention of many, especially after authorities decreed that bodies not claimed from a morgue within 15 days would be buried on the island, The Washington Post reported.

Other countries such as Brazil, England and Iran have also had to resort to digging mass graves due to the increased death rate caused by COVID-19.

In his homily, the pope reflected on the day's first reading from the Acts of the Apostles, which recalled the apostle Philip's encounter with an Ethiopian eunuch who was restless while trying to understand a reading from the prophet Isaiah.

This restlessness, the pope explained, was God preparing him to receive his word and an important aspect to consider when evangelizing.

"This is valid for our apostolate, for our apostolic mission as Christians," the pope said. Missionaries aren't charged with converting people because it is "the Father who will attract those hearts to recognize Jesus."

Instead, Christians are called to bear witness to their faith; otherwise, their work "will be a charitable organization, (which is) very good, but nothing more."

"If I want to go on mission," the pope said, "I must go with the disposition that the Father draws people to Jesus, and this is what giving witness testimony does."

The pope recalled a woman "of goodwill" who told him about how she converted two young people to Catholicism.

"The lady was good, but she was wrong," he explained. "I lost my patience a bit and said: 'Listen, you didn't convert anyone; it was God who touched these people's hearts. Don't forget: witness, yes; proselytism, no.'"

Francis said that prayer is essential to evangelization; Christians must ask God to open people's hearts and let them recognize the Christian witness they are seeing.

"Without witness and prayer, one cannot make an apostolic preaching, one cannot make a proclamation," the pope said. "You may give a beautiful sermon on morality; you may do many good things. But the Father will not be able to draw people to Jesus."