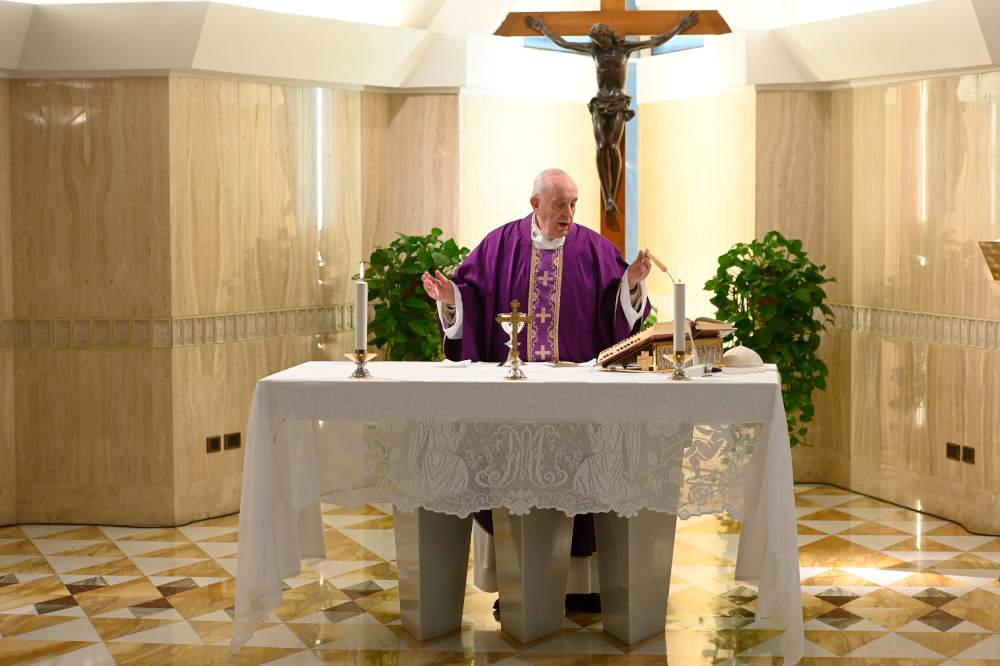 Pope Francis celebrates Mass in the chapel of the Domus Sanctae Marthae at the Vatican, March 26, 2020. (CNS/Vatican Media

Pope Francis offered his early morning Mass for vulnerable people and health care workers who live in fear that they or their loved ones may fall ill to the coronavirus pandemic sweeping the world.

"In these days of so much suffering, there is so much fear," the pope said March 26 at the start of the Mass, which was livestreamed from the chapel of his residence, the Domus Sanctae Marthae.

Francis spoke specifically of "the fear of the elderly who are alone in retirement homes or in hospitals or in their own homes and do not know what could happen; the fear of workers without a steady job who think about how they will feed their children and see hunger coming; the fear of many social servants who in these moments help society move forward and could get sick."

But he also acknowledged "the fear — the fears — of each one of us," and prayed that God "would help us to have trust and to tolerate and overcome fear."

In his homily, the pope reflected on the first reading from the Book of Exodus, which recounts how the Israelites made a golden calf and began to worship it.

The pope said the sin of the Israelites revealed the "idolatrous nostalgia" for the certainties they had even as slaves in Egypt.

"This nostalgia is a disease, even for us. One begins to walk with the enthusiasm of being free, but then the complaints begin," he said. "Idolatry is always selective; it makes you think about the good things it gives you but doesn't make you see the bad things. In this case, they thought about how they were at their table, with such good meals they liked so much, but they forgot that this was the table of slavery."

Idolatry, he continued, also caused the Israelites to lose everything, including the gold and silver they had received from Egypt after their liberation.

"This also happens to us," the pope said. "When we have attitudes that lead us to idolatry, we are attached to things that alienate us from God so we make another god and we make it with the gifts God has given us; with intelligence, with will, with love, with the heart. Those are the gifts of the Lord we use to do idolatry."

Francis invited Christians to ask themselves what their idols are and warned that idolatry can "lead to a mistaken religiosity," which can "change the celebration of a sacrament into a worldly feast."

"Take for example a wedding celebration," he said. "You don't know whether it's sacrament where the newlyweds give each other everything and love each other in front of God and promise to be faithful before God and receive the grace of God, or if it's a fashion show with the way this one or that one is dressed. It is worldliness, it is idolatry."

The pope prayed that at the end of our lives, God would not be able to say, "You have perverted yourself. You have strayed from the path I had indicated. You have prostrated yourself before an idol."