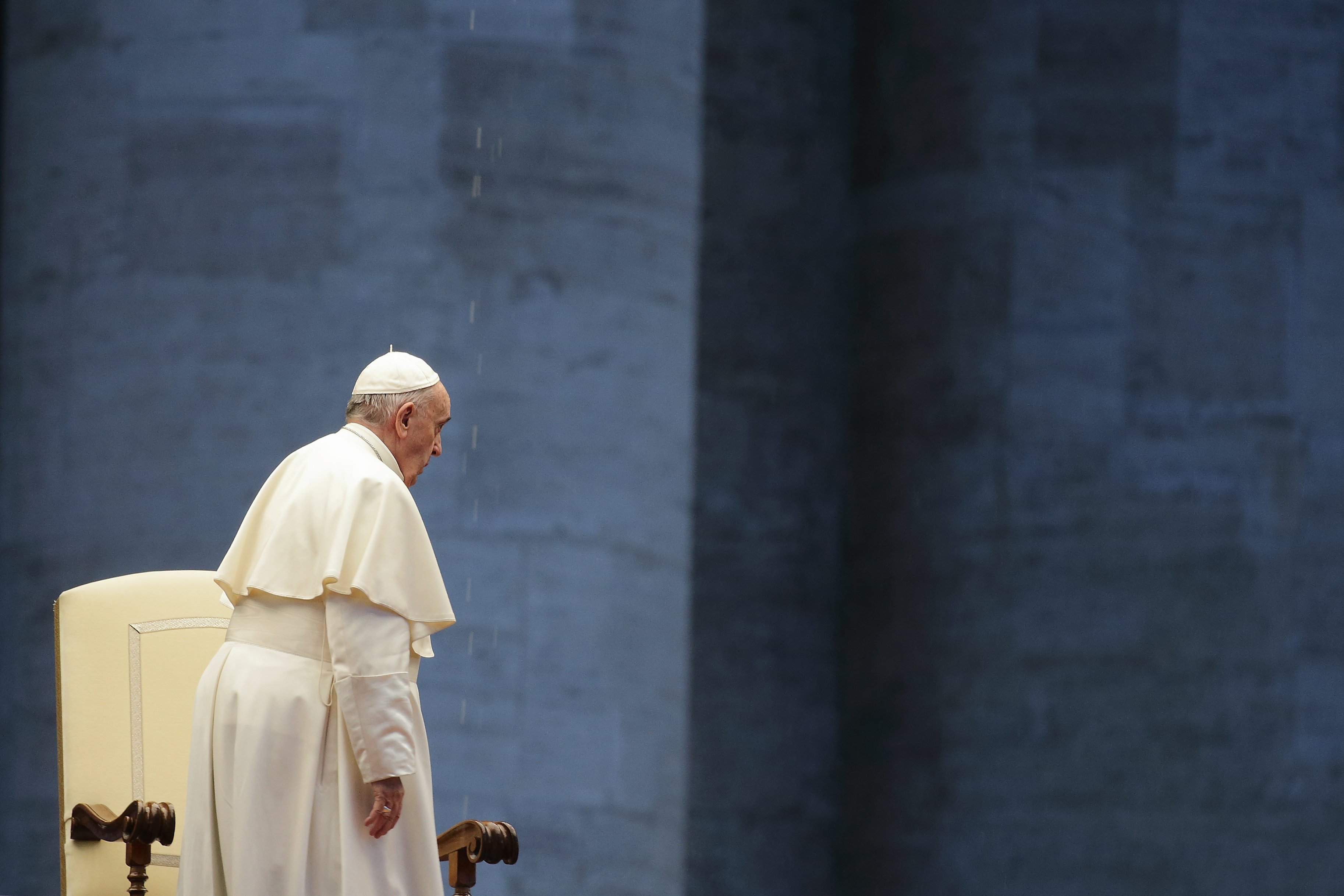 Pope Francis is pictured during a prayer service in an empty St. Peter's Square at the Vatican in this March 27, 2020, file photo. In an interview with Argentine journalist and doctor Nelson Castro, Pope Francis said he is not afraid of death and that he expects to die in Rome "as pope, either in office or emeritus." (CNS/Evandro Inetti, pool)

Pope Francis said he believes he will die in Rome, either in office or retired, and will not be buried in his native Argentina.

In an interview published in the Argentine newspaper La Nación Feb. 27, the pope said that while he thinks about death, he is not afraid of it.

"How do you imagine your death?" the pope was asked by Argentine journalist and doctor Nelson Castro.

"As pope, either in office or emeritus. And in Rome. I will not return to Argentina," he replied.

The interview was an excerpt from Castro's new book, titled "La Salud de Los Papas" ("The Health of the Popes"), which details the health of the pontiffs from Pope Leo XIII to Francis.

According to Castro, Francis encouraged him to write the book and agreed to be interviewed. The conversation took place in February 2019.

In it, the pope spoke candidly about his mental health and told Castro that although he had never undergone psychoanalysis, he did meet with a psychiatrist for six months during "the terrible days of the dictatorship, when I had to take people into hiding to get them out of the country and save their lives."

Praising the psychiatrist as "a great woman" whose teachings "are still very useful to me today," Pope Francis said she helped him to manage his anxiety and "to avoid rushing when making decisions."

"Imagine what it was like to drive a person hidden in a car — covered only by a blanket — and to go through three military checkpoints," he said. "The tension it generated in me was enormous."

The pope also said that while he believes that the "study of psychology is necessary for a priest," he does not believe that priests should practice psychology "due to the problem of transference and countertransference."

When that happens, he explained, "the roles are confused and the priest stops being a priest and becomes a therapist with a level of involvement that makes it very difficult to distance himself."

Francis also spoke about a pulmonary condition he suffered in 1957 at the age of 21 that required him to undergo surgery to remove the upper right lobe of one of his lungs.

The pope said that while his recovery was painful, it was "complete, and I never felt any limitation in my activities."

"As you have seen, for example, in the various trips I have made and that you have covered, I never had to restrict or cancel any of the scheduled activities. I never experienced fatigue or shortness of breath," he told Castro.

The Argentine journalist also asked Francis if he was aware of his own neuroses.

Describing it as an "anxious neurosis," the pope said that he has "quite tamed my anxiety" and has learned ways to deal with "a situation or a problem that makes me anxious."

"One of them is listening to Bach," the pope said. "It calms me down and helps me to analyze problems in a better way. I confess that, over the years, I have managed to put a barrier to the entry of anxiety in my spirit."

"It would be equally harmful to make decisions dominated by anxiety and sadness," he added. "That is why I say that a person must be attentive to neurosis, since it is something inherent in his or her being."