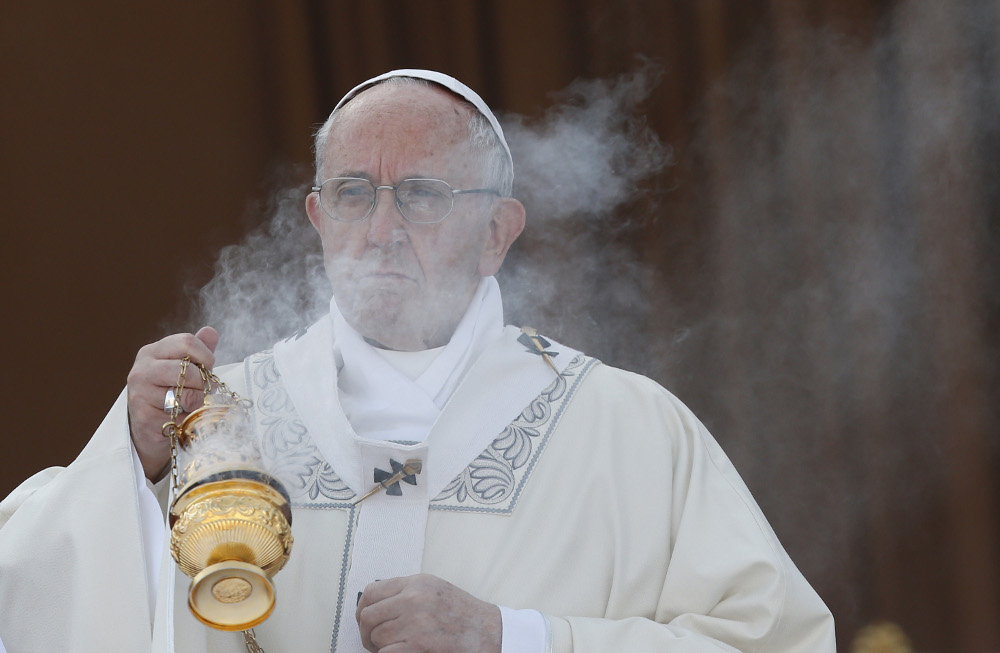 Pope Francis burns incense as he celebrates Mass marking the feast of Corpus Christi in Ostia, a suburb of Rome, June 3. (CNS/Paul Haring)

As he did with his disciples at Passover, Jesus asks all Christians to prepare a place for him, not in "exclusive, selective places" but rather in uncomfortable places that are "untouched by love, untouched by hope," Pope Francis said.

"How many persons lack dignified housing or food to eat! All of us know people who are lonely, troubled and in need: they are abandoned tabernacles. We, who receive from Jesus our own room and board, are here to prepare a place and a meal for these, our brothers and sisters in need," the pope said in his homily during Mass June 3, the feast of the Body and Blood of Christ.

Pope Francis celebrated the feast day Mass not in Rome, as had been the tradition since 1979, but in the seaside town of Ostia, about 16 miles west. Ostia was where St. Monica, the mother of St. Augustine, died in 387 on a journey back to Africa after St. Augustine's conversion to Christianity.

During his pontificate, Blessed Paul VI celebrated the feast day in different neighborhoods in and around Rome, including in Ostia in 1968.

Pope Francis' evening Mass outside St. Monica Church was followed by a Corpus Christi procession through the streets of Ostia.

A local priest carried the monstrance containing the Blessed Sacrament, surrounded by four men carrying tall poles holding a canopy. Thousands of men, women and children lined the streets, taking photos and reverently making the sign of the cross as the Blessed Sacrament passed them.

Due to his difficulty walking long distances, Pope Francis met the procession at the Church of Our Lady of Bonaria instead of participating in it.

Before the benediction, the pope stood before the Blessed Sacrament, head bowed in silent prayer, while the choir sang "Tantum Ergo," the medieval Eucharistic hymn composed by St. Thomas Aquinas.

In his homily, the pope reflected on the Gospel reading in which Jesus instructs his disciples to find a place to celebrate the Passover.

Although the disciples were supposed to prepare the place, the pope noted, they discover a large room that is "furnished and ready."

"Jesus prepares for us and asks us to be prepared," the pope said. "What does he prepare for us? A place and a meal. A place much more worthy than the 'large furnished room' of the Gospel."

That place here on earth, the pope said, is the church "where there is, and must be, room for everyone."

The Eucharist, he added, "is the beating heart of the church" and strengthens all men and women who partake in it.

When receiving Jesus' body and blood, Christians are not only given their "reservation" to the heavenly banquet, but also nourished with the "bread of heaven," which is "the only matter on earth that tastes of eternity," he said.

All men and women, he continued, have a hunger to be loved and are never fully satisfied, even when receiving "the most pleasing compliments, the finest gifts and the most advanced technologies."

Instead, by receiving Communion and worshipping Christ in the tabernacle, Christians "encounter Jesus" and feel his love.

"Dear brothers and sisters, let us choose this food of life! Let us make Mass our priority!" he exclaimed. "Let us rediscover Eucharistic adoration in our communities! Let us implore the grace to hunger for God, with an insatiable desire to receive what he has prepared for us."

Pope Francis said that by giving themselves in service to others, Christians live "eucharistically" and imitate Jesus who "became bread broken for our sake."

Like the disciples, who were instructed by Jesus to go out to the city to make preparations, Christians also are called to prepare for Jesus' coming "not by keeping our distance but by entering our cities" and tearing down "the walls of indifference and silent collusion."

"The Eucharist invites to let ourselves be carried along by the wave of Jesus, to not remain grounded on the beach in the hope that something may come along, but to cast into the deep, free, courageous and united," the pope said.