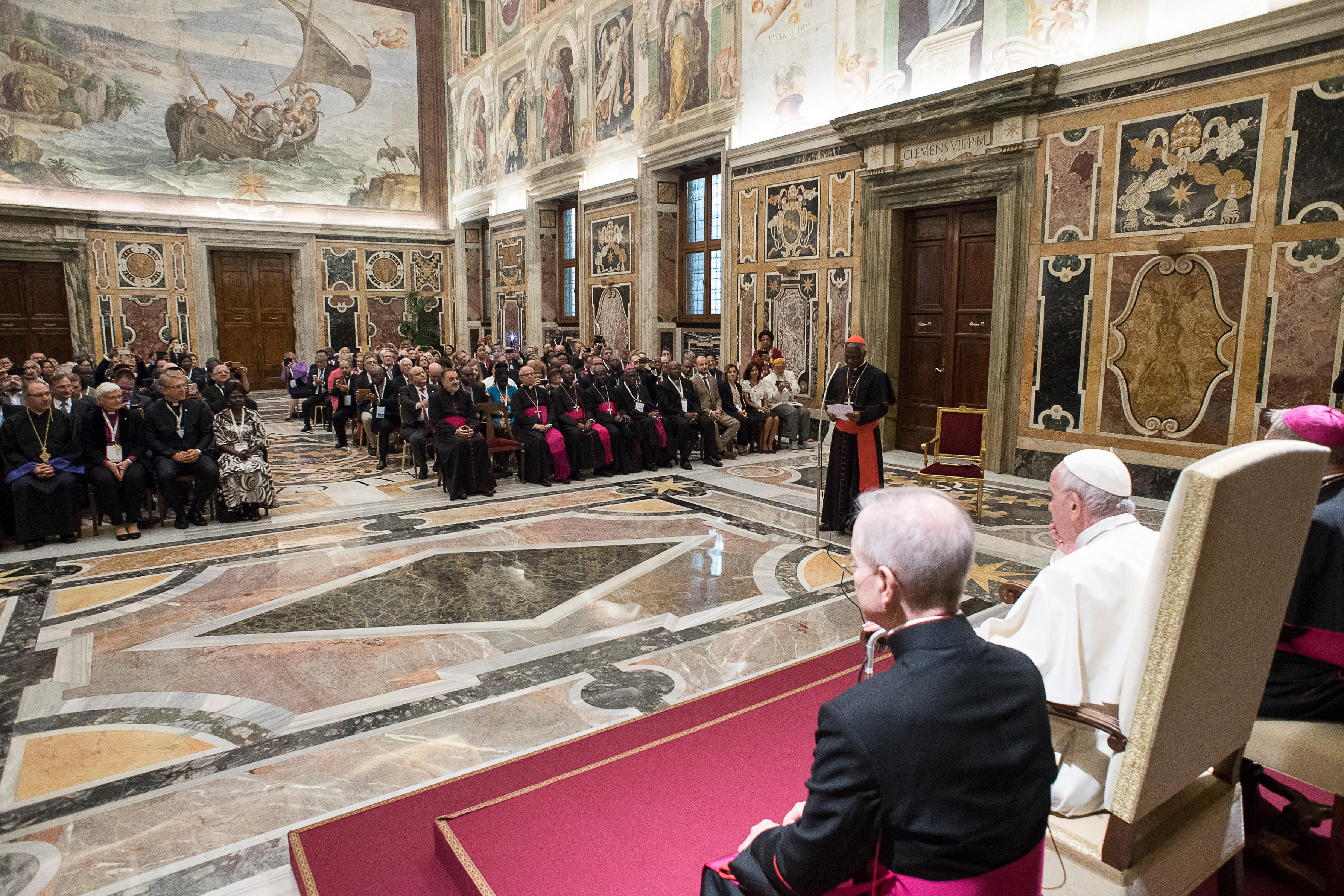 Pope Francis leads an audience with people attending the World Conference on Xenophobia, Racism, and Populist Nationalism in the Context of Global Migration, at the Vatican Sept. 20. The conference was held in Rome Sept. 18-20 in collaboration with the Vatican and the World Council of Churches. (CNS/Vatican Media)

No one can remain indifferent to the way minority groups are increasingly the object of so much fear, scorn and hatred, Pope Francis said.

And he warned those who profit from exploiting foreigners or people in precarious situations and those who contribute to today's new forms of slavery that one day they will have to answer to God for the choices they have made, he said Sept. 20.

The pope's remarks came in a written speech he handed participants attending a Sept. 18-20 conference on "Xenophobia, Racism and Populist Nationalism in the Context of Global Migration." The gathering was jointly hosted by the Dicastery for Promoting Integral Human Development and the Geneva-based World Council of Churches in collaboration with the Pontifical Council for Promoting Christian Unity.

In his speech, the pope noted how "feelings of suspicion, fear, contempt and even hatred" were on the rise against individuals or groups who have been judged to be "different" based on their ethnicity, national origin or religious affiliation, and, as such were being considered "not sufficiently worthy of being fully part" of a community's life.

These feelings, he added, "all too often inspire real acts of intolerance, discrimination or exclusion" and can gravely harm people's dignity and rights.

Unfortunately, he said, the same attitudes also can be seen in the world of politics when people "give in to the temptation of exploiting the fears and objective difficulties of some groups and use misleading promises for short-sighted electoral interests."

The seriousness of these situations "can leave no one indifferent," he said. "We are all called to cultivate and promote the respect of the dignity intrinsic to every human person."

Families and educators, he said, must show what sharing, welcoming and solidarity look like.

The media, he said, have a particular "duty to put themselves at the service of truth" and make sure the information they share fosters "a culture of encounter and openness to others, in mutual respect for diversity."

Religious leaders must all share God-given ethical values and principles that uphold the dignity of life, respect human dignity and foster solidarity, he said.

However, the pope sent a clear warning to those who benefit economically from "the climate of distrust toward foreigners" by using undocumented workers and feeding a system of job insecurity and exploitation.

These people should look deeply into their own conscience, he said, "knowing that one day they will have to answer to God for the choices they made."

"Racism is a sin, in both its personal and systemic expressions, radically incompatible with the Christian faith," the statement said. "People of faith must condemn racism because it denies human dignity and the mutual belonging to the one human family and defaces the image of God in every human being."

Participants also affirmed the right of people fleeing from armed conflict, persecution or natural disaster to seek asylum in another nation, and "we invoke respect for the rights for all people on the move, regardless of their status," said the statement.

Turning to the issue of populist nationalism, the message said, "Claiming to protect Christian values or communities by shutting out those who seek safe refuge from violence and suffering is unacceptable, and undermines Christian witness in the world, and raises up national boundaries as idols."

The participants pledged to will work together for the "transformation of unjust structures and systems" and to strive to promote a culture of "encounter and dialogue, recognizing God in the face of migrants."