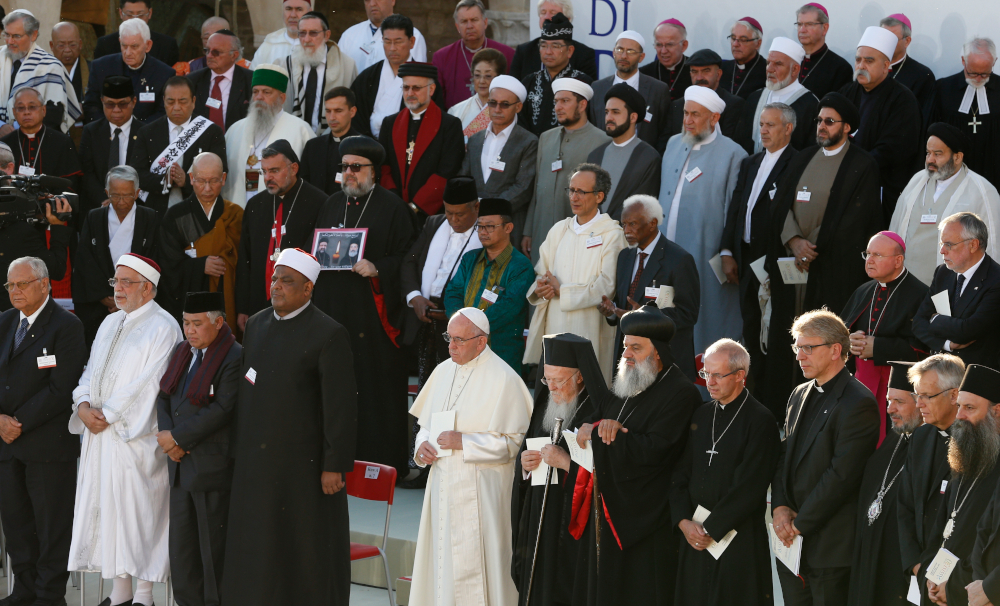 Pope Francis and religious leaders attend an interfaith peace gathering outside the Basilica of St. Francis in Assisi, Italy, Sept. 20, 2016. The event marked the 30th anniversary of the first peace encounter. (CNS/Paul Haring)

Promoting sincere ecumenical dialogue can be achieved only when Christians are committed to loving their neighbors rather than viewing them with doubt or suspicion, Pope Francis said.

In a message sent Feb. 18 at the start of a Lenten campaign sponsored by the Brazilian bishops' conference and Brazil's national council of Christian churches, the pope said the campaign's goal of promoting dialogue and communion with other Christian communities is "a reason for hope."

"We must never forget that we are pilgrims journeying alongside one another. This means that we must have sincere trust in our fellow pilgrims, putting aside all suspicion or mistrust and turning our gaze to what we are all seeking: the radiant peace of God's face," he said.

The theme of the "Ecumenical Fraternity Campaign" for 2021 is "Fraternity and Dialogue: Commitment of Love." According to the campaign's official website, the event is an "expression of communion, conversion and sharing" through acts of charity and solidarity.

In his message, the pope said the Lenten season is "a time of intense reflection" on one's life and an invitation to walk with Christ "toward the paschal victory over sin and death."

In this time of pandemic, he added, Jesus also calls on Christians "to pray for those who have died, to bless the selfless service of so many health professionals and to encourage solidarity among people of goodwill."

"We need to overcome the pandemic and we will do so in the measure that we are able to overcome divisions and unite around life," the pope said.

Recalling his encyclical "Fratelli Tutti, on Fraternity and Social Friendship," the pope said the Lenten works of prayer, fasting and almsgiving are the necessary tools to prevent Christians from plunging "even more deeply into feverish consumerism and new forms of egotistic self-preservation."

The "Ecumenical Fraternity Campaign," he added, offers an opportunity for Christians to "'sit down to listen to others' and thus overcome the obstacles of a world that is often a 'deaf world.'"

Francis said Jesus' commandment to "love one another as he loved us" begins with recognizing that "respect for each human person as a creature called to be a child of God contributes significantly to building fraternity and defending justice in society."

"The fruitfulness of our witness also depends on our ability to dialogue, to find points of unity and to translate them into actions in favor of life, especially the lives of the most vulnerable," the pope said.