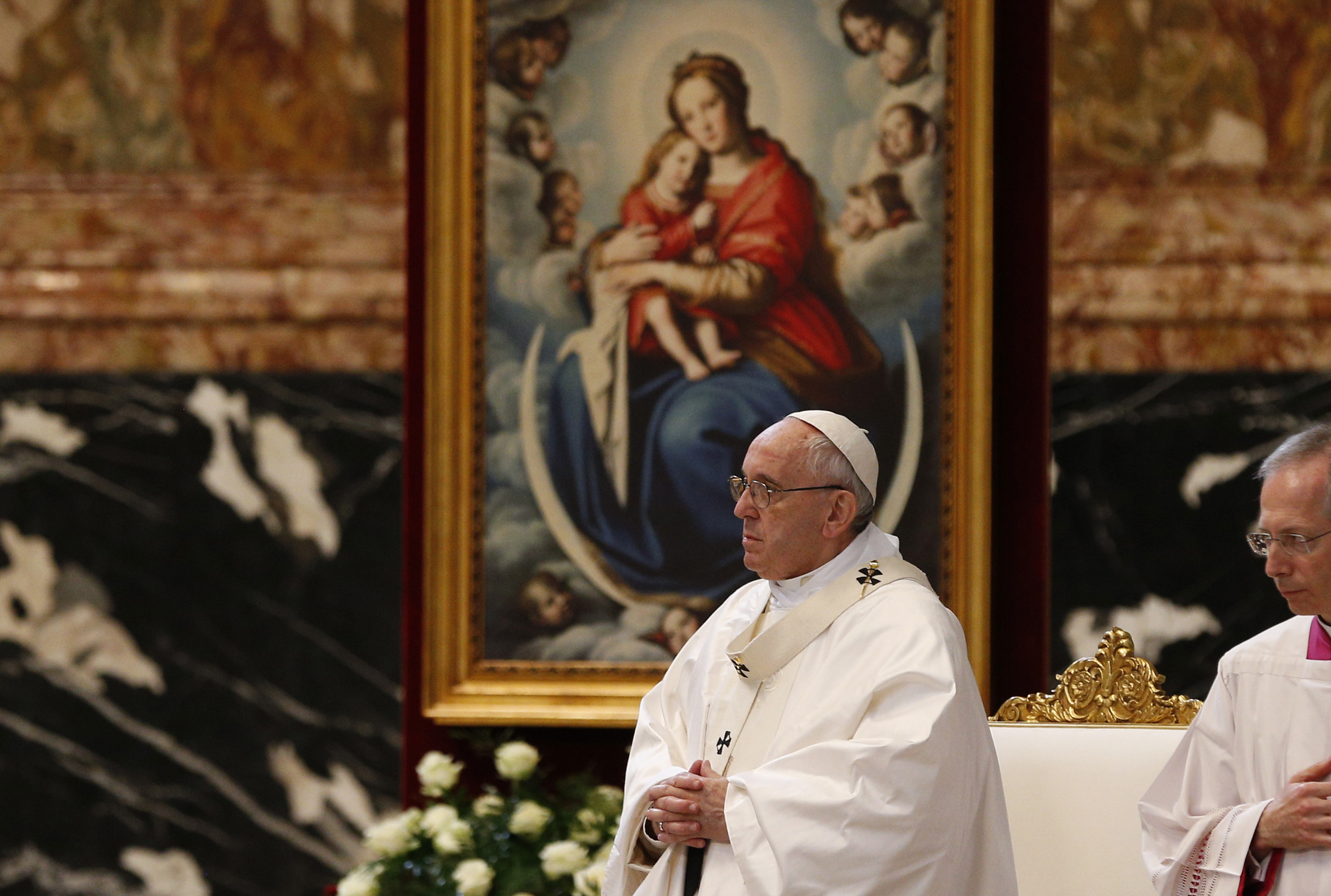 Priests must give hope to men and women seeking forgiveness, encouraging them in their struggle away from the slippery slope of sin, Pope Francis said.

Being merciful in the confessional helps penitents return to God without fear, even if they repeatedly stumble or slip on a path that "is filled with stones and banana peels," the pope told 550 priests he designated as "missionaries of mercy."

"In short, mercy restores dignity," the pope said April 10. "The penitent does not indulge in self-pity for the sin committed, and the priest does not blame him for the evil from which he repented. Rather, he encourages him to look to the future with new eyes, leading him to 'springs of water.'"

The missionaries of mercy, religious-order and diocesan priests from around the world, were among more than 1,000 who received a special papal mandate to preach and teach about God's mercy during the 2015-16 Holy Year of Mercy.

After listening to "many testimonies of conversion," Francis said he felt the need to prolong their mission.

"We must truly recognize that God's mercy has no limits," the pope said, "and with your ministry, you are a concrete sign that the church cannot, should not and does not want to create any barrier or difficulty that impedes access to the Father's forgiveness."

To be effective heralds of mercy, the pope continued, priests must recognize the merciful love they first received from God in their own lives.

Departing from his prepared remarks, Francis said he often reflects on St. Paul's words to the community of Ephesus in which he praises God for "having treated me with mercy."

"This does so much good to me, it gives me courage," the pope said. "That is to say, I feel the Father's embrace, the Father's caress. Repeating this, personally speaking, gives me so much strength because it is the truth. I, too, can say, 'I have been treated with mercy.'"

Francis also warned the priests to avoid acting in a way that instead of bringing penitent sinners closer, "pushes them away." That can happen, he said, when, "by defending the integrity of the Gospel, they overlook the steps that a person is taking day by day" to move closer to God's way.

"God's grace isn't nourished in this way," he said. "To recognize the sinner's repentance is the same as welcoming him with arms wide open, to imitate the father in the parable who welcomes his son when he returns home."

Like the father of the prodigal son, who did not even let his son finish his apology when he returned, priests must not be inquisitors, concerning themselves with the gritty details which causes "shame to one who has already recognized his sin and knows he has made a mistake," he said.

As missionaries of mercy, Francis said, priests are called to be "interpreters and witnesses" of God's mercy which "welcomes everyone and always without any distinction."

"Mercy takes the hand and instills the certainty that the love with which God loves defeats every form of solitude and abandonment," the pope said.

After his speech, Francis celebrated Mass with the missionaries of mercy at the Altar of the Chair in St. Peter's Basilica.

In his homily, the pope reminded them of their duty to serve individuals and communities and not be "fanatical priests" who carry out some extraordinary ministry.

"No," he said. "Be normal priests: simple, meek, balanced yet able to let yourselves be constantly regenerated by the Spirit, docile to its strength, interiorly free -- especially free from yourselves -- so that you are moved by the 'wind' of the Spirit that blows where it wants."