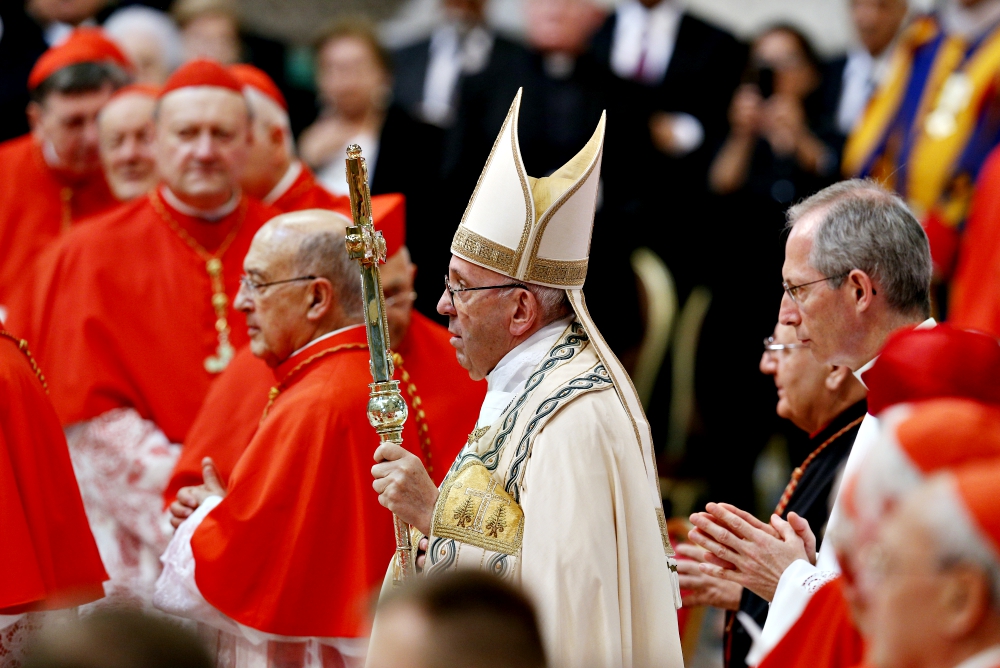 Pope Francis told the world's Catholic cardinals they must act as servants to the people under their care, admonishing them not to undertake "useless wrangling" about who is more important but to earn their authority by serving those most in need.

In a June 28 ceremony at St. Peter's Basilica marking the creation of 14 new cardinals, the pope said, "The only credible form of authority is born of sitting at the feet of others in order to serve."

"It is the authority that comes from never forgetting that Jesus, before bowing his head on the cross, did not hesitate to bow down and wash the feet of the disciples," the pope explained during the ceremony, known as a consistory.

"None of us must feel 'superior' to anyone," he said. "None of us should look down at others from above. The only time we can look at a person in this way is when we are helping them to stand up."

He said that Jesus' statement to his disciples that "whoever would be first among you must be slave of all" should be "the beatitude and the Magnificat that we are called to sing daily."

"The church's authority grows with this ability to defend the dignity of others, to anoint them and to heal their wounds and their frequently dashed hopes," said Francis.

Historically, cardinals have come from larger cities known for their Catholic populations or global importance, Francis has sought to diversify representation in the group — choosing men from places long underrepresented or even not represented in the College of Cardinals.

One of the most dramatic choices was Chaldean Patriarch Louis Raphaël I Sako, an Iraqi who often speaks publicly about the suffering his people have encountered after the U.S.-led invasion of their country in 2003.

At a press briefing June 27, Sako said his being named a cardinal tells Christians in Iraq and across the Middle East that "the pope is thinking about them."

"With this appointment, the pope wanted to say he is present, he is close to them," Sako said. "They are not isolated or forgotten."

Sako said he thought his naming as cardinal may also lend a sign of papal approval to his frequent call for efforts at dialogue and reconciliation among Iraqis suffering after years of war and the violence perpetrated by the Islamic State group.

"I think it's an appeal for reconciliation," he said. "Only dialogue can solve problems. Not war or weapons."

The pope reflected in his homily on a portion of Mark's Gospel where Jesus walks ahead of the disciples as they journey to Jerusalem.

"The evangelist does not shrink from disclosing secrets present in the hearts of the disciples: their quest of honors, jealousy, envy, intrigue, accommodation and compromise," Francis said. "This kind of thinking not only wears and eats away at their relationship, but also imprisons them in useless and petty discussions."

"Jesus teaches us that conversion, change of heart and church reform is and ever shall be in a missionary key, which demands an end to looking out for and protecting our own interests," the pope continued, warning the cardinals against "becoming effective 'roadblocks,' whether because of our shortsightedness or our useless wrangling about who is most important."

During the ceremony, each prelate received his new signet ring and red hat, known as a biretta, from Francis before St. Peter's high altar.

Sako, who as a patriarch takes precedence over the 13 other new cardinals, addressed Francis on behalf of the group at the beginning of the ceremony.

He said that being named a cardinal is "not a prize, nor a personal honor ... but an invitation to a mission with a red suit that signifies the giving of life to the very end, even to the giving of blood, in order to bring the Evangelii Gaudium, the joy of the Gospel, to all."

"We are aware of the risks and the challenges that we must confront but our faith in the Lord gives us the courage to continue to hope for a better future for all," said Sako.

"In your presence today, we wish to renew our fidelity, our love for the church and for the people with our promise to do our best to be joyous witnesses of our faith, of our love, of gratuity, of pardon, of constructing peace in today's world," he continued. 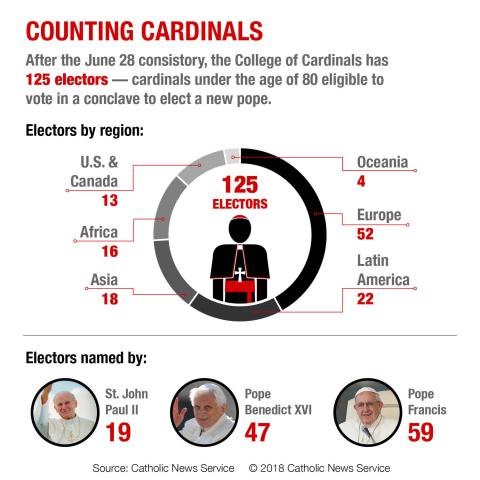 Among the others made cardinal were Archbishop Joseph Coutts of Karachi, Pakistan; Archbishop Pedro Barreto of Huancayo, Peru; Archbishop Désiré Tsarahazana of Toamasina, Madagascar; and Archbishop Manyo Maeda of Osaka, Japan.

Ten current cardinal electors will reach the age of 80 in 2019, beginning Jan. 30 with Alberto Suárez, archbishop emeritus of Morelia, Mexico. Others who will reach age 80 in 2019 include Edwin O'Brien, grand master of the Order of the Holy Sepulchre; and Stanislaw Dziwisz, a close associate of John Paul II and archbishop emeritus of Krakow, Poland.

A version of this story appeared in the July 13-26, 2018 print issue under the headline: Francis warns cardinals against 'useless wrangling' over power.