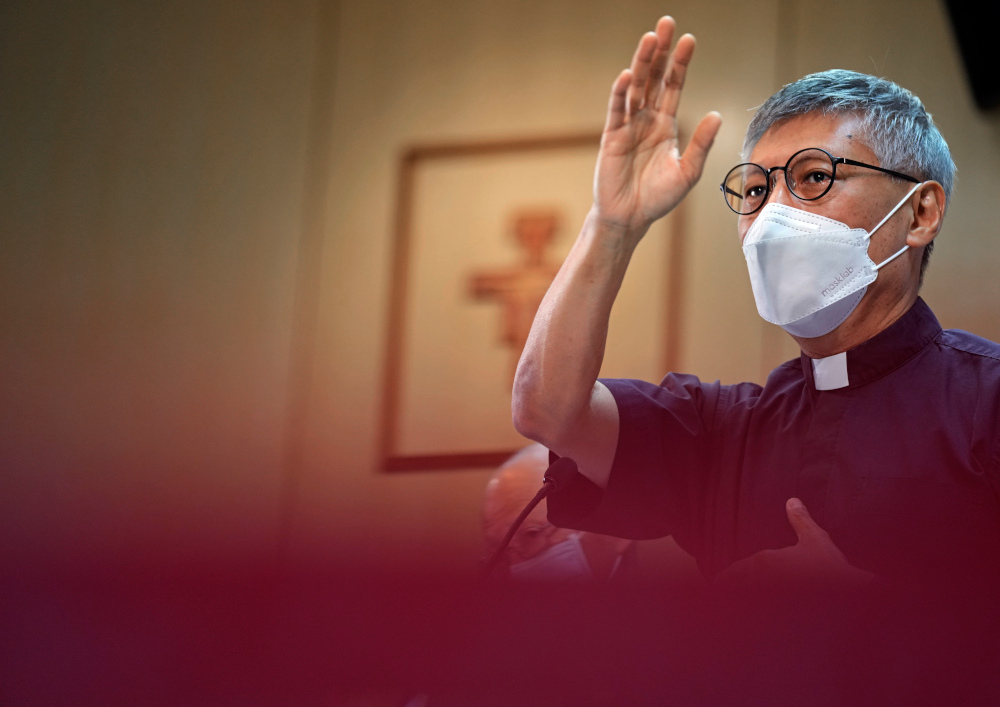 Stephen Chow Sau-yan prays after a press conference in Hong Kong Tuesday, May 18, 2021. Pope Francis on Monday named a new bishop for Hong Kong, tapping the head of his own Jesuit order in the region, the Rev. P. Stephen Chow Sau-Yan, for the politically sensitive position that has been vacant for two years. (AP/Vincent Yu)

Hong Kong's incoming Roman Catholic bishop Stephen Chow called for respect for different views as he prepares to lead a diocese that has been polarized by the city's deteriorating political situation.

Chow said while he had "no big plan" on how to unify a Catholic community divided since months of anti-government protests in 2019, he believed that God wanted them to be united.

"Unity is not the same as uniformity," Chow said at a news conference on May 18, one day after Pope Francis named him to head the Hong Kong diocese. "One thing I've always mentioned recently in schools is unity is plurality.

"We need to respect plurality," he said.

Chow, whose appointment won't be effective until Dec. 4, will replace Bishop Michael Yeung, who died in 2019. A Hong Kong native, the 62-year-old Chow was educated in the U.S. and Ireland and is a school supervisor at the city's Wah Yan College.

Chow has headed the Chinese Province of the Society of Jesus since 2018, and led the Jesuit order in mainland China, Hong Kong, Macau and Taiwan as China and the Vatican signed a landmark deal in 2018 that gave both sides a say in the appointments of bishops in the Chinese church.

China's Catholics are legally only allowed to worship in churches approved by the Chinese government, but many attend underground churches led by bishops loyal to Rome.

Chow said on May 18 that there should not be the assumption that Beijing and the Chinese church are enemies since both churches believe in the same faith, and should try to seek understanding together.

However, he reiterated that the Latin Church does not have a formal diplomatic relationship with China, and therefore operates independently.

When asked about his thoughts on calls to commemorate the Tiananmen Square crackdown in 1989 this year, Chow said that whether public commemoration is possible this year depends on legal requirements.

He had participated in past public commemorations in Hong Kong, which last year for the first time did not allow public gatherings to mark the June 4 anniversary of the crackdown in which Chinese troops moved against student-led, pro-democracy demonstrations in Beijing, killing hundreds, possible thousands, of protesters.

He said that there are different means of commemoration. "I pray for all those who have passed in 1989, in all aspects, from all walks of life," Chow said.