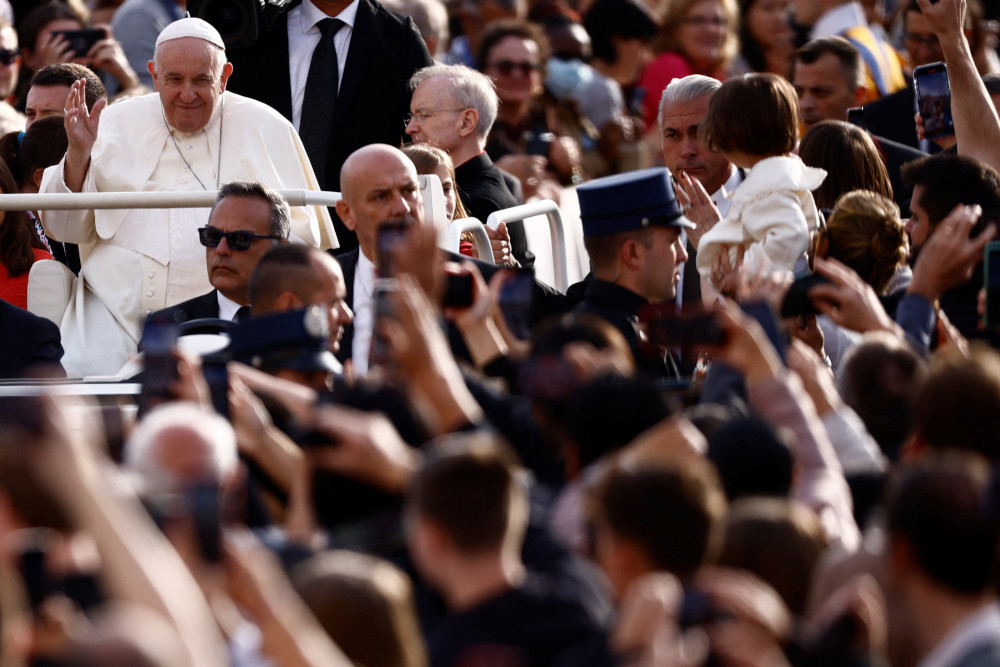 Jesus never abandons, coerces or blackmails anyone when they stray, rather, he patiently waits and is "our greatest and most faithful friend," Pope Francis said.

"He remains at the door of the heart. We say, 'No, I do not want to know anything about you.' And he remains silent, he remains there within reach, within heart's reach because he is always faithful," the pope said.

"It is a grace we must ask for one another: to see Jesus as our greatest and most faithful friend, who does not blackmail, above all who never abandons us, even when we turn away from him," the pope said Sept. 28 at his weekly general audience in St. Peter's Square.

Continuing his series of talks about discernment, the pope said it is an important process for trying to understand "what is happening inside of us, our feelings and ideas, and we have to discern where (these things) come from, where they are taking me and what decision" needs to be made, he said.

An indispensable part of this process is prayer, which requires being somewhere that fosters a prayerful, reflective moment and developing a close, simple and loving familiarity with Jesus, he said.

Prayer allows people to speak to God "as one would speak to a friend," going beyond the words and entering into "intimacy with the Lord, with an affectionate spontaneity," the pope said.

An ever-growing "familiarity and confidence with God" makes it easier, he said, to recognize what is pleasing to God and helps people overcome any "fear or doubt that his will is not for our good, a temptation that sometimes runs through our thoughts and makes the heart restless and uncertain and even bitter."

Since the beginning of time, he said, Satan has been suggesting that God does not want people to be happy.

"Many people, even Christians, think the same thing, that Jesus may well be the Son of God, but they doubt that he wants our happiness; indeed, some fear that taking his proposal seriously means ruining our lives, mortifying our desires, our strongest aspirations," Francis said.

"These thoughts sometimes creep up inside us: that God asks too much of us -- we are afraid -- or he wants to take away what we hold most dear. In short, that he doesn't really love us," he said.

However, the pope said, the sign of encountering Jesus is joy. "Sadness, or fear, on the other hand, are signs of distance from him," even though these people may have "an abundance of possessions and possibilities at their disposal."

Jesus never forces anyone to follow him, the pope said. He lets people know his will and lets them be free to decide.

"Discerning is not easy, for appearances are deceptive, but familiarity with God can melt doubts and fears in a gentle way, making our lives increasingly receptive to his 'gentle light,'" the pope said.

Something similar happens when prayer is marked by love and familiarity, "it makes us more and more able to recognize what counts," he said.

Prayer is not "parroting" words, but is opening one's heart to Jesus, moving closer to him and letting him "enter my heart and feeling his presence." This is how people can then discern "when it is Jesus and when it is just us with our thoughts, so often far from what Jesus wants."

Francis said he hoped people would develop a life of prayer that greets the Lord with the heart, that is simple, friendly and affectionate, and that has "few words" but is accompanied by good deeds and works.

At the end of his talk, the pope offered his greetings to all student groups present, "in particular, the diaconate class of the Pontifical North American College and their families. Upon all of you I invoke the joy and peace of Christ our Lord," he said.

Twenty-three seminarians, representing 18 dioceses in the United States and Australia, were set to be ordained deacons Sept. 29.