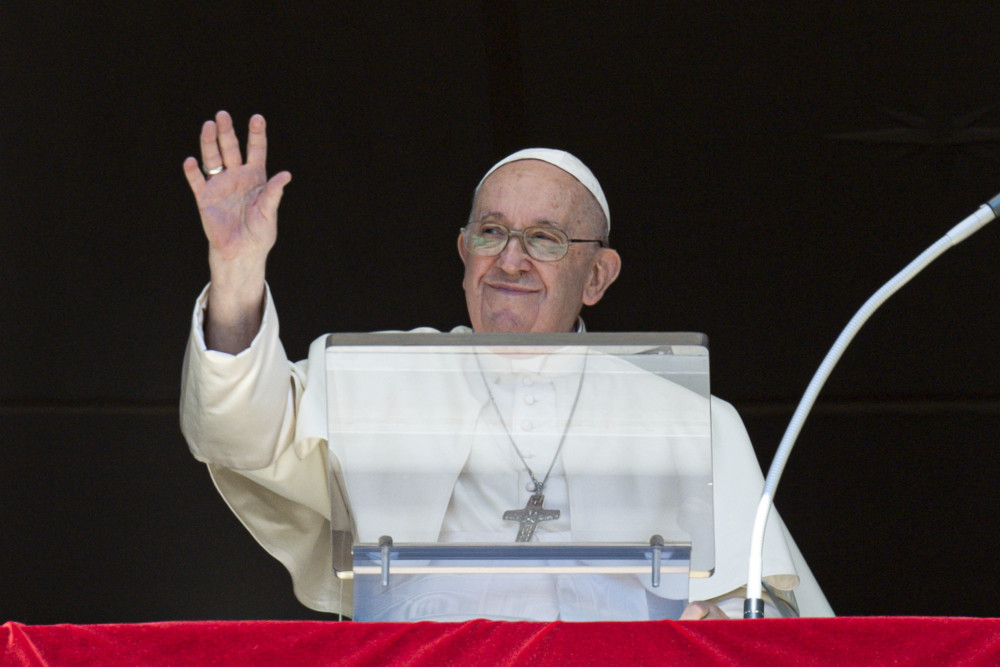 Pope Francis greets the crowd as he leads the Angelus from the window of his studio overlooking St. Peter's Square at the Vatican Sept. 18, 2022. The pope called for cease-fire between Armenia and Azerbaijan and an end to the war in Ukraine. (CNS photo/Vatican Media)

Pope Francis once again called for peace in the Caucasus region as the escalating conflict between Azerbaijan and Armenia prompted renewed fears of war.

After praying the Angelus prayer with pilgrims gathered in St. Peter's Square Sept. 18, the pope said he was "saddened by the recent fighting between Azerbaijan and Armenia," and he appealed for an end to the violence.

"I express my spiritual closeness to the families of the victims, and I urge the parties to respect the ceasefire in view of a peace agreement," he said. "Let us not forget that peace is possible when weapons are silenced and dialogue begins!"

The pope also called on pilgrims to pray "for the suffering people of Ukraine and for peace in every land bloodied by war."

In 2020, hostilities in the region prompted a six-week war between the two countries.

The pope first appealed for peace in the region during his visit to Kazakhstan after reports that clashes Sept. 12-13 led to the death of 100 soldiers. According to the Reuters news agency, both countries blamed each other for the fighting.

Before praying the Angelus prayer, the pope reflected on the Sunday Gospel reading from St. Luke in which Jesus tells the parable of the dishonest steward who, after losing his job, earns the respect of his master and seeks a creative solution rather than "resign himself to his fate" or "play the victim."

However, the pope continued, the lesson Jesus wishes to impart to his followers is that in order to inherit eternal life "there is no need to accumulate goods in this world, but what matters is the love we will have expressed in our fraternal relations."

"This is what Jesus asks of us," the pope said. "Do not use the goods of this world only for yourselves and selfishly, but use them to create friendship, to create good relationships, to act with charity, to promote fraternity and to show care for the weakest."

Francis called on Christians to not "become discouraged, or worse, to let things go, remaining indifferent" when hearing stories of corruption in today's world.

Instead, "we are called to be creative in doing good with the prudence and the cleverness of the Gospel" and to use both material and spiritual goods to "generate fraternal love and social fellowship."

"This is very important: Through our behavior we can create social friendship," the pope said.