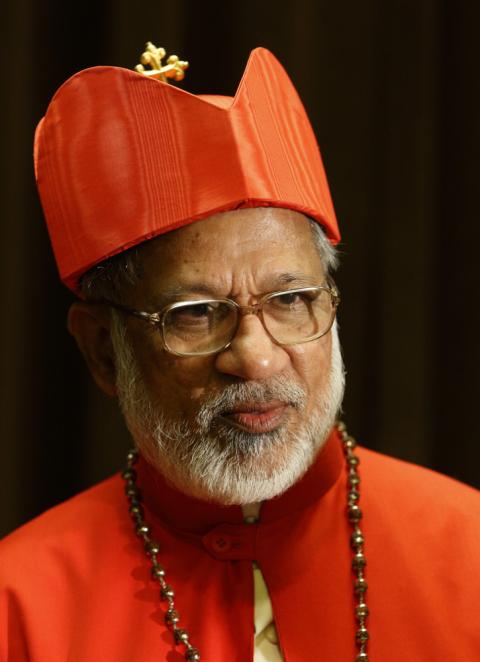 Cardinal George Alencherry of India, major archbishop of the Syro-Malabar Catholic Church, is pictured at a reception after he was made a cardinal by Pope Benedict XVI at the Vatican Feb. 18, 2012. (CNS/Paul Haring)

While Cardinal George Alencherry still retains the title of major archbishop of the Syro-Malabar Archdiocese of Ernakulam-Angamaly, Pope Francis named an apostolic administrator to run the Indian archdiocese.

The pope appointed 71-year-old Bishop Jacob Manathodath of Palghat to be the apostolic administrator "sede plena,'' or effective head, of the archdiocese, said a Vatican press release June 22.

Ucanews.com reported the Vatican also removed three prelates from their administrative duties in the same archdiocese, which has been experiencing infighting and financial controversies aggravated by disputed land deals.

It is first time in the history of this Asian church that the Vatican has suspended the administrative powers of all the bishops in a diocese, said a senior priest who asked to remain anonymous.

"It shows a grave situation of ethical violations and the inability of the synod to effectively settle the issue," he told ucanews.com.

In 2011, Alencherry, now 75, was selected by the Syro-Malabar Catholic Church's decision-making synod and confirmed by the pope to be major archbishop and head of the Eastern church. Pope Benedict XVI elevated him to the College of Cardinals in 2012.

Ucanews.com reported a letter from Cardinal Leonardo Sandri, prefect of the Vatican's Congregation for Eastern Churches, said, "There remains the grave and worrying" situation of division between priests, auxiliary bishops and Cardinal George Alencherry.

It reported the letter said the administrator's primary job is to seek "healing of these fractures and eventually propose solutions that require the intervention of the Synod of Bishops," the supreme decision-making body of the Syro-Malabar Church, based in Kerala.

The archdiocese was embroiled in a controversy in November when the presbyteral council, the canonical body of priests, publicly accused Alencherry of being part of dubious land deals.

The priest-representatives told media that the cardinal, two senior priests and a real estate agent had sold several plots of land at undervalued prices, incurring a loss of more than $10 million. They also accused the cardinal of bypassing the canonical body.

The letter from Sandri said the administrative powers of Auxiliary Bishops Sebastian Adayantrath and Jose Puthernveetil have been suspended. The Vatican also suspended all archdiocesan offices and its council, giving the new administrator the freedom to reshape them or constitute new ones.

The letter asked the new administrator to conduct an audit of the archdiocese by an independent agency and send the result only to the Vatican, in a confidential manner.

It said Alencherry "should absolutely not be involved" in any decisions. However, the administrator may appoint a synodal committee to help him, but it should have only a consultative role.

The apostolic administrator has appointed a new vicar general, financial officer, and other officials in the archdiocese. He also issued a circular sending a message of reconciliation to Catholics, which was read out in all parishes June 24.

The Syro-Malabar Church has more than 4 million members worldwide. It traces its origin to St. Thomas the Apostle, who is said to have reached the shores of Kerala in A.D. 52.