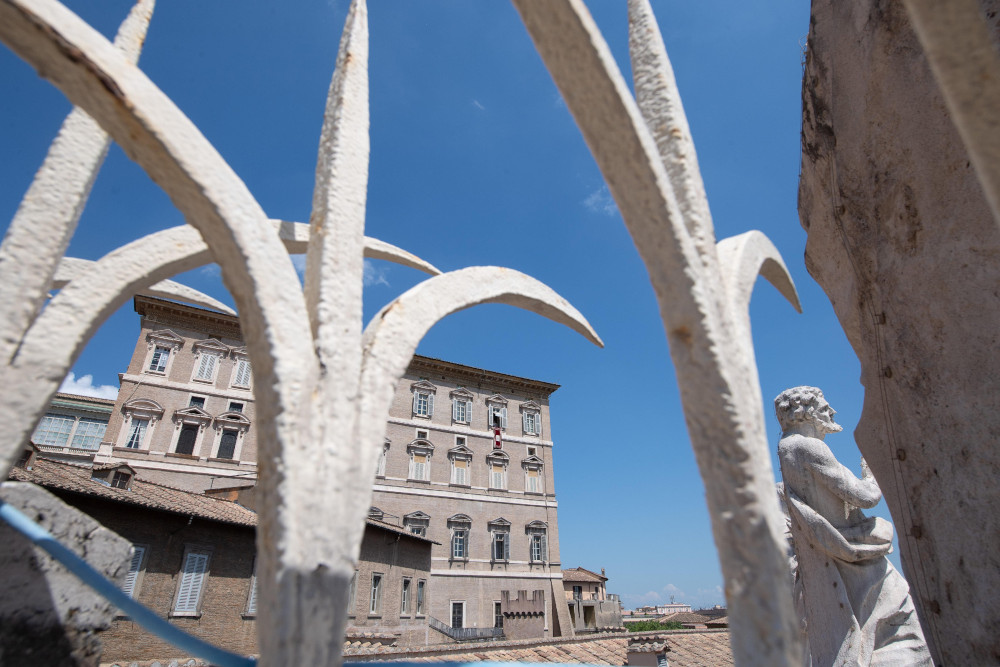 Pope Francis leads the "Regina Coeli" from the window of his studio overlooking St. Peter's Square at the Vatican May 9, 2021. Francis has ordered the minor seminary that is located inside the Vatican and currently at the center of a criminal sex abuse trial to move to a new location in Rome before classes begin in the fall. (CNS/Vatican Media)

Pope Francis has ordered the minor seminary that is located inside the Vatican and currently at the center of a criminal sex abuse trial to move to a new location in Rome before classes begin in the fall.

The idea of moving the seminary had been under study "for some time," said a statement May 25 from Matteo Bruni, director of the Vatican press office. The idea, he said, was to find a building closer to where the students go to school in Rome and where they play.

Fr. Angelo Magistrelli, rector of the St. Pius X Pre-Seminary and superior of the Opera Don Folci, which runs the institute, told the Vatican court April 14 that the current enrollment is 26 boys and young men and that the number of inquiries about admissions had been increasing.

Boys as young as 12 live at the seminary, act as altar servers at liturgies in St. Peter's Basilica and study at the St. Apollinare Institute, a Catholic middle school and high school. The 26 current residents also include 10 students who finished high school while at the pre-seminary and continue to live there while taking college courses.

Bruni said Francis communicated his decision to Magistrelli during an audience but also thanked the priest and the Opera Don Folci "for the work accomplished in the 75 years since the institution's founding," and he asked that the students be allowed to continue as altar servers in the basilica.

"In the life of the activity of the St. Pius X Pre-Seminary it is a new stage which undoubtedly will offer it new opportunities for growth and development, especially in the sphere of promoting vocations to sacred ministry," Bruni said.

The Vatican statement made no mention of the trial, which began in October, in which Father Gabriele Martinelli is accused of sexually abusing a younger student when they both were living at the pre-seminary.

Msgr. Enrico Radice, the former rector of the seminary, also is on trial and is accused of hindering the investigation into the abuse allegations. And the seminary and the Opera Don Folci are accused of failing to protect the young students.

The website of the pre-seminary says that since its founding in 1956, almost 200 students have gone on to the priesthood or entered religious life.