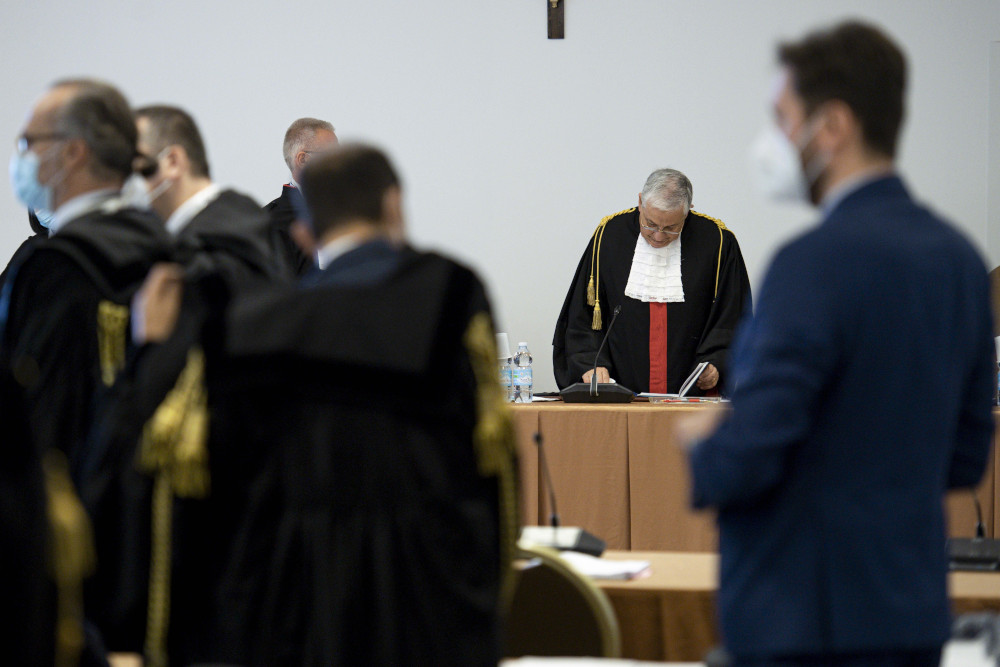 Judge Giuseppe Pignatone presides at the third session of the trial of six defendants accused of financial crimes, at the Vatican City State criminal court Nov. 17, 2021. As the trial of 10 defendants resumed Sept. 28, 2022, prosecutors concluded their interrogation of Fabrizio Tirabassi, a former official at the Secretariat of State, and began hearing witness testimony. (CNS photo/Vatican Media)

The Vatican auditor general said he was surprised by the lack of ethical standards demonstrated by officials considering investment opportunities, including a failed London property development deal.

During the Vatican trial of 10 defendants accused of various charges related to financial malfeasance, Alessandro Cassinis Righini, auditor general of the Holy See and Vatican City State, criticized the mismanagement of funds as well as the Vatican's association with people "with clear conflicts of interest," which resulted in the loss of millions of euros.

"That was not the way to manage funds from Peter's Pence," Cassinis told the court Sept. 30, referring to the papal fund used for charity and to support the running of the Roman Curia and Vatican embassies around the world.

When asked by Vatican prosecutors if he was sure that funds from the annual collection were used in the London property deal, Cassinis replied, "Yes."

The trial, which resumed Sept. 28 after a long summer break, stems from an investigation into how the Secretariat of State purchased property in London's posh Chelsea district, and why deal incurred such huge losses.

Between 2014 and 2018, it is believed the Vatican Secretariat of State invested 200 million euros (more than $240 million at the time) to purchase the London property. Additionally, payments to brokers and debts collected on the property raised the total investment to 350 million euros.

Cassinis said his office notified Vatican authorities in 2019 regarding discrepancies in the London property deal.

Testifying as one of the prosecution's 27 witnesses, Cassinis said that in the summer of 2018, he was asked by Pope Francis to conduct a financial review and to deliver a report on his findings to Archbishop Edgar Peña Parra, who had just been appointed Vatican substitute secretary for general affairs.

The pope often requested such reviews, he said. But when he began his review, Cassinis "immediately" discovered "some things that were very strange" with the London property deal, including a lack of independent appraisals of the property value, bank statements and balances.

Cassinis also recalled discussions by Vatican officials who considered investing millions of dollars in an offshore oil platform in Angola in 2012.

Although the investment proposal was ultimately rejected, the auditor general said he was "dumbfounded" that it was even considered, since the proposal "was contrary to the environmental criteria contained in 'Laudato Si','" Francis' encyclical on the environment.

During the court session Sept. 28, Fabrizio Tirabassi, a former official at the Secretariat of State, was questioned for more than three hours by prosecutors.

Tirabassi, who is accused of corruption, extortion, embezzlement, fraud and abuse of office, was grilled by Vatican prosecutor Alessandro Diddi about aspects of his and his wife's personal finances.

Describing the Vatican official's income as "stable," Diddi showed the court a 2015 Swiss bank statement of an account under Tirabassi's name with an estimated 1.3 million euros.

Tirabassi said the money came from Vatican funds he was given power of attorney over beginning in 2004 by Msgr. Gianfranco Piovano, former head of the Secretariat of State's administrative office.

However, Tirabassi said the power of attorney was withdrawn in 2009 by Piovano's successor, Msgr. Alberto Perlasca.

Perlasca was initially seen as a possible suspect after Vatican police seized documents, computers and even floppy disks from his home and office in 2020. However, the information he provided voluntarily to prosecutors turned him from suspect into star witness.

The court is scheduled to hear more witness testimonies in the coming weeks, with Vatican police commissioner Stefano De Santis scheduled to take the stand Oct. 12.