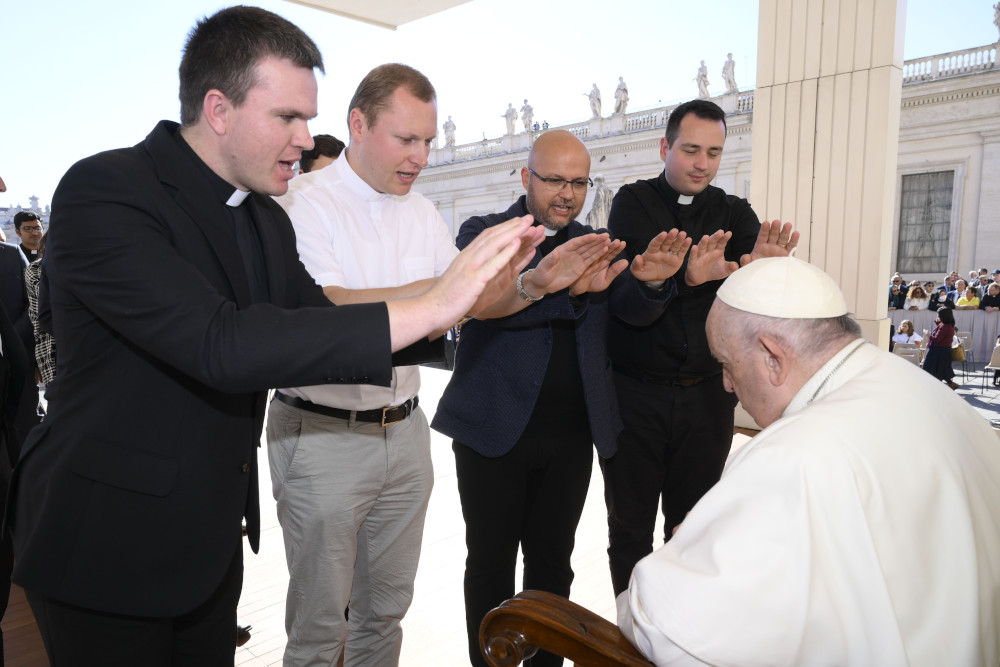 Priests pray over Pope Francis during his general audience in St. Peter's Square at the Vatican Oct. 5, 2022. (CNS photo/Vatican Media)

To know oneself is a gift and a grace that allows Christians to properly discern between feelings and convictions, Pope Francis said.

During his weekly general audience in St. Peter's Square Oct. 5, the pope said that knowing oneself requires "patient soul-searching" and the awareness of one's "way of acting, of the feelings that dwell within us."

"It also requires that we distinguish between emotions and spiritual faculties," he said. "'I feel' is not the same as 'I am convinced.' 'I feel like' is not the same as 'I want.' Thus, we come to recognize that the view we have of ourselves and of reality is at times somewhat distorted. To realize this is a grace!"

Continuing his series of talks about discernment, the pope reflected on the element of self-knowledge that is crucial in discovering what one truly wants or needs in his or her life.

The pope explained that at times it is difficult to discern the path for one's life "because we do not know ourselves well enough."

"You have heard many times: 'But that person, why doesn't he or she sort out their life?'" he said departing from his prepared remarks. It "happens to us too that when we do not know clearly what we want, we do not know ourselves well."

Spiritual doubts and vocational crises, he added, are often caused by "an insufficient dialogue between our religious life and our human, cognitive and affective dimension."

Furthermore, "forgetting God's presence" in one's life goes "hand-in-hand with ignorance of ourselves," he said.

Francis said that much like computer programs requiring a password to access important and personal information, the spiritual life also "has its passwords," words that touch one's heart in a particularly powerful way.

However, he warned, the devil also "knows these passwords well."

"Temptation does not necessarily suggest bad things, but often haphazard things, presented with excessive importance," the pope explained. "In this way, it hypnotizes us with the attraction that these things stir in us, things that are beautiful but illusory, that cannot deliver what they promise and therefore leave us in the end with a sense of emptiness and sadness."

That sadness, he said, is an indication that "we have embarked on a path that was not right."

Francis said Christians need to "know the passwords of our heart" to protect themselves from external manipulations and distinguish what is truly important from "current fads or flashy, superficial slogans."

He also encouraged Christians to make "a general examination of conscience" each day in prayer to reflect on "what happened in my heart in this day" and "learn to note in our evaluations and choices what we give most importance to, what we are looking for and why, and what we eventually find."