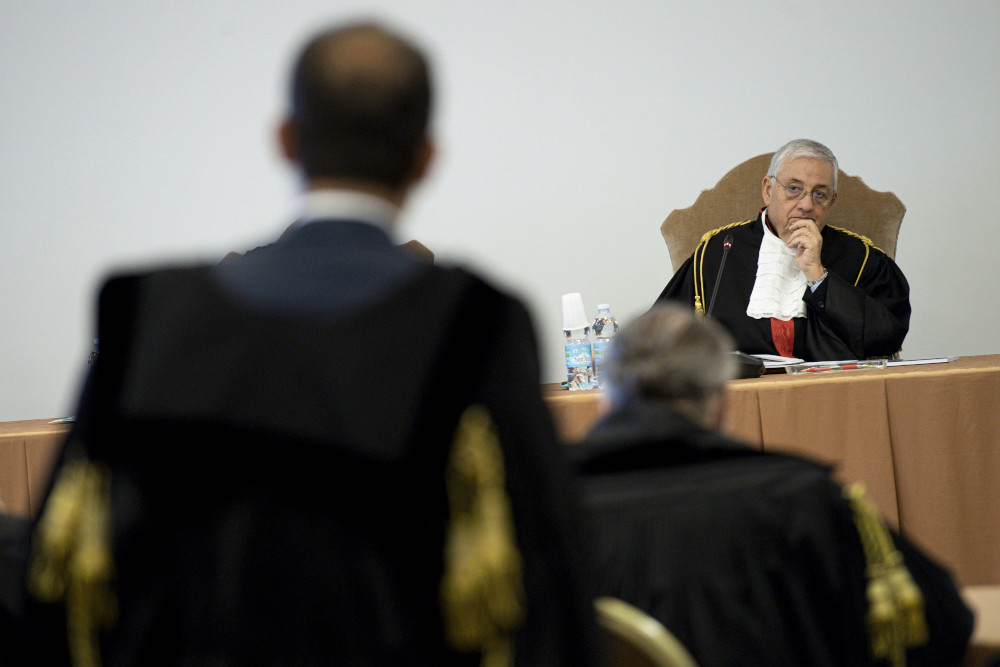 After learning that Cardinal Angelo Becciu and a relative of his secretly recorded a phone call with Pope Francis, the Vatican's chief prosecutor said his office is considering a new charge -- one of criminal conspiracy -- against the cardinal, who has been on trial since July 2021 for financial malfeasance.

Alessandro Diddi, the prosecutor, played the recording in the courtroom Nov. 24 after sending reporters out of the room. But lawyers for the 10 defendants, who include Becciu, described the tape's contents, and an Italian news site, JustOut, published what it said was a transcript the following day.

The recording was made July 24, 2021, 10 days after Francis was released from a Rome hospital after undergoing major surgery and just days before the cardinal's trial began.

The president of the tribunal, Giuseppe Pignatone, told those in the courtroom he was authorized by "the superior" to play the tape; it was clear to those present that he was referring to Francis.

The recording begins with a woman identified as Maria Luisa Zambrano, the cardinal's niece, asking if he was ready. The cardinal says he is and dials the phone, leaving it on speaker. Francis answers.

According to JustOut, after asking how the pope was feeling, Becciu explained that he would never think of calling the pope as a witness in his trial, but he said he could be found guilty unless the pope acknowledged he authorized Becciu to spend money from the Vatican Secretariat of State to free a nun kidnapped in Mali.

The transcript said the cardinal spoke of Francis authorizing him to pay a company in London 350,000 euros to make the arrangements and another 500,000 euros to pay the ransom for the release of Sr. Gloria Cecilia Narváez, a Colombian nun kidnapped in 2017 by militants in Mali.

The pope, according to the transcript, repeatedly asked Becciu to write him a letter explaining what he wanted, although at one point Francis does say, "I remember, vaguely, but I remember."

On Nov. 28, 2022, Becciu told ANSA, the Italian news agency, that he had "a cordial meeting" with Francis two days earlier to "provide clarifications I thought were necessary and to demonstrate and renew my absolute devotion."

The company in London apparently was suggested to the cardinal by Cecilia Marogna, another defendant in the trial. Becciu did not mention Marogna in the recorded call with the pope, JustOut reported.

Earlier the court heard that in 2018 and 2019 Becciu had authorized making nine bank transfers, amounting to 575,00 euros, to a supposed charity in Slovenia run by Marogna, but she is accused of spending the money on luxury goods for herself.

Narváez was freed in October 2021; no evidence has been presented to suggest the payments sent to Marogna had any effect on the nun's release.

The recording was provided to the Vatican by the public prosecutor's office in the Sardinian city of Sassari, which confiscated telephones, tablets and computers from relatives of Becciu as part of a separate investigation into the finances of Spes, a Caritas organization run by the cardinal's brother, Tonino Becciu, in his home Diocese of Ozieri. The Vatican prosecutor has accused Becciu of embezzling money from the Vatican and directing the funds to Spes.