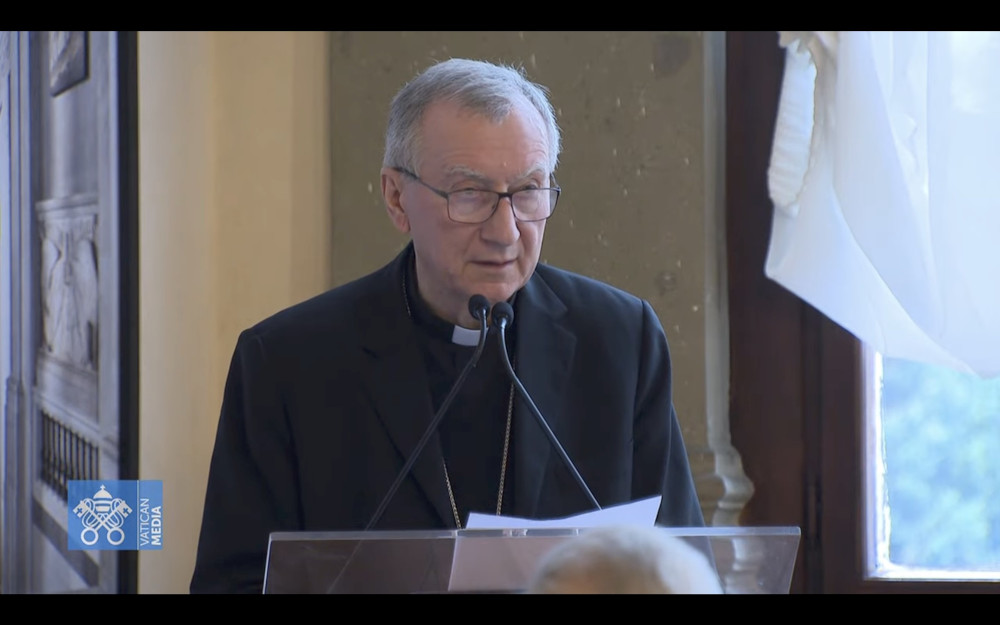 Cardinal Pietro Parolin, Vatican secretary of state, speaks in this screen capture of Vatican video from an event sponsored by the Embassy of Italy to the Holy See, in Rome Dec. 13, 2022. In his speech, Cardinal Parolin asked if everything possible is being done to end the tragedy of the war in Ukraine, "which began with the aggression perpetrated by the army of the Russian Federation" more than nine months ago. (CNS photo/Vatican Media)

Disarmament is the only way to build a peaceful future, said Cardinal Pietro Parolin, Vatican secretary of state.

"We need to imagine and build a new concept of peace and international solidarity, remembering that so many countries and peoples are asking to be heard and represented," he said.

"We need courage to bet on peace and not on the inevitability of war, on dialogue and cooperation and not on threats and divisions. We need military and verbal de-escalation" to rediscover the human face of others, the cardinal said Dec. 13.

Parolin was speaking at an event sponsored by the Italian Embassy to the Holy See in partnership with Vatican Media and the Italian geopolitical journal, Limes.

The meeting, which was attended by Italian President Sergio Mattarella, was dedicated to reviving the "spirit" of the so-called Helsinki Process, which was a yearslong series of negotiations seeking to improve the détente between the East and the West. It resulted in the signing of the Helsinki Accords in 1975, establishing the inviolability of European borders, rejecting the use of force or intervention in the internal affairs of other nations and urging the 35 signatories to respect human rights.

In his speech, Parolin said, "we cannot help but wonder if we are really doing everything, everything possible," to end the tragedy of the war in Ukraine, "which began with the aggression perpetrated by the army of the Russian Federation" more than nine months ago.

Pope Francis has called for "the use of all diplomatic means, including those that have not yet been used, to achieve a cease-fire and a just peace," the cardinal said.

Parolin said the possible use of nuclear weapons and atomic warfare is "terrifying" and it is distressing to see the acceleration of the arms race in several countries, especially when the huge amounts of money could instead be used "to fight hunger, create jobs and ensure adequate medical care for millions who never had any."

The world has seen "how real the possibility of sliding into the abyss of nuclear conflict is, even because of human error. Disarmament is the only adequate and decisive response if we are to build a peaceful future," he said.

The spirit of Helsinki should be revived "by working creatively" and finding new ways to address crises and war, he said, because the present and future cannot be based on "old patterns, old military alliances or ideological and economic colonization."

The cardinal called for "a new major European conference dedicated to peace," which should include the participation of experts and organizations dedicated to nonviolence and dialogue.

"The Holy See is ready to do everything possible to facilitate this path," he said. "We hope to revive the spirit of Helsinki in a renewed way adapted to the current situation."

He called for greater commitments "to put an end to the fratricidal barbarism taking place in Ukraine."

"Let us all commit ourselves to building a new system of international relations in which it is not just the powerful or the bullies who make the decisions. Let us return to the spirit of Helsinki to find the way back to peace in Europe," he said.