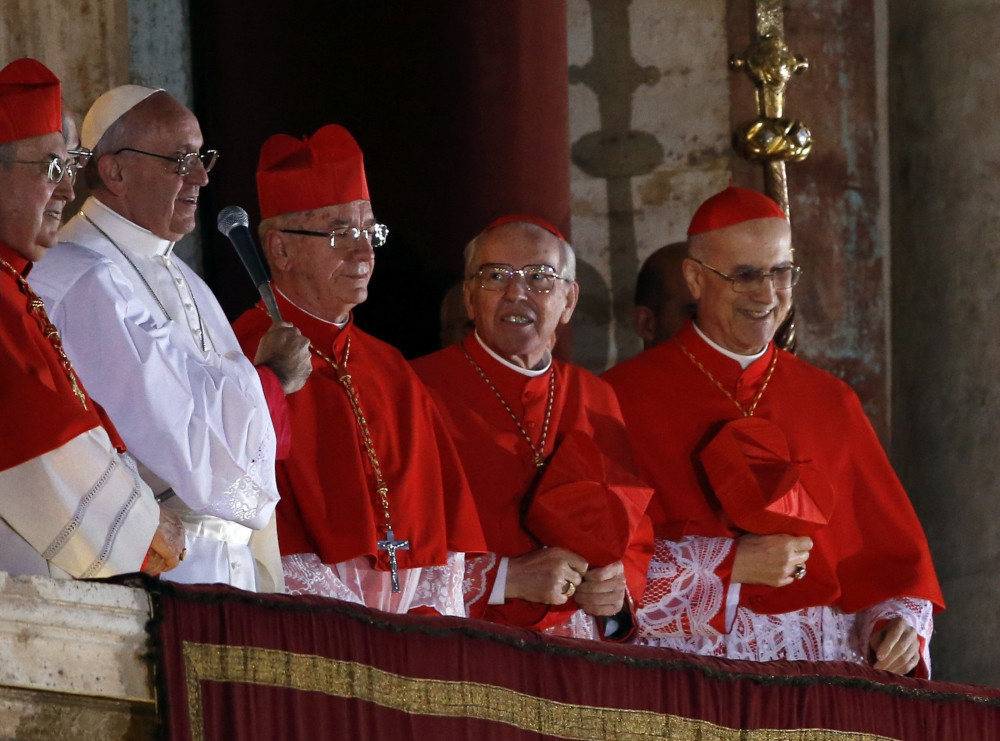 Newly elected Pope Francis I, second from left, appears on the central balcony of St. Peter's Basilica after being elected by the conclave of cardinals at the Vatican March 13, 2013. The world's cardinals elected Cardinal Jorge Mario Bergoglio of Buenos Aires, Argentina, a 76-year-old Jesuit, as pope. (CNS photo/Alessandro Bianchi, Reuters)

The best way to fight a sense of fear about the future is to do good today, Pope Francis said.

"The voice of the enemy," the devil, "distracts us from the present and wants us to focus on the fears for the future or the sorrows of the past," Francis said. But "you can do good now, you can exercise now the creativity of love not only for yourself but also for your family and community."

The pope spoke about how he deals with fear and gave advice to others about handling fear in an interview for a new book by Salvo Noè, an Italian psychotherapist. The Vatican newspaper Jan. 21 published excerpts of the interview from the book, "La Paura Come Dono," ("Fear as a Gift").

"The only way not to be afraid of the future is to do good now, giving up the regrets and remorse that imprison the heart," Francis told Noè. "What we do now creates our future. That is why we must not fall into the devil's trap that only generates fear."

Fear "isn't something far from me," the pope said. "It's a feeling I have a relationship with."

Fear can be an alarm that warns of danger ahead and it can be "a companion of common sense that helps you see the size of things," he said.

"If I know how to use fear to understand the message it is trying to give me," the pope said, "then it is a help."

But, he said, fear also can imprison or paralyze a person.

"Excessive fear is an attitude that hurts us, weakens us, shrinks us, paralyzes us so much so that a person enslaved to fear does not move, does not know what to do," the pope said.

Excessive fear "is not a Christian attitude" because it keeps a person focused on him- or herself, immobilized while waiting for something bad to happen, he said. Giving in to fear, the person loses the ability to create something and to do good.

Asked about his election as pope March 13, 2013, Francis said, "I did not expect to be elected, but I have never lost my (sense of) peace. I had brought a small suitcase, fully convinced I would be returning to Buenos Aires for Palm Sunday" less than two weeks after the conclave began.

Francis said he still misses being able to walk the streets of the city and take public transportation like he used to do in Argentina, but "I have to follow the security protocols. They are afraid something could happen to me. So, fear is present also in this case," and he has an obligation not to make life more difficult for the Swiss Guards, Vatican police and Italian police responsible for his security.

His choice to continue living in the Domus Sanctae Marthae, where the cardinals were housed during the conclave, also had a fear factor, he said. "I need to meet people, talk with them, and I feel freer here. I'd have felt caged up there and that made me afraid."

Knowing oneself makes it easier to deal with fears, he said, and he knew the papal apartments in the Apostolic Palace with their "large rooms, but narrow entrances" would keep people out.