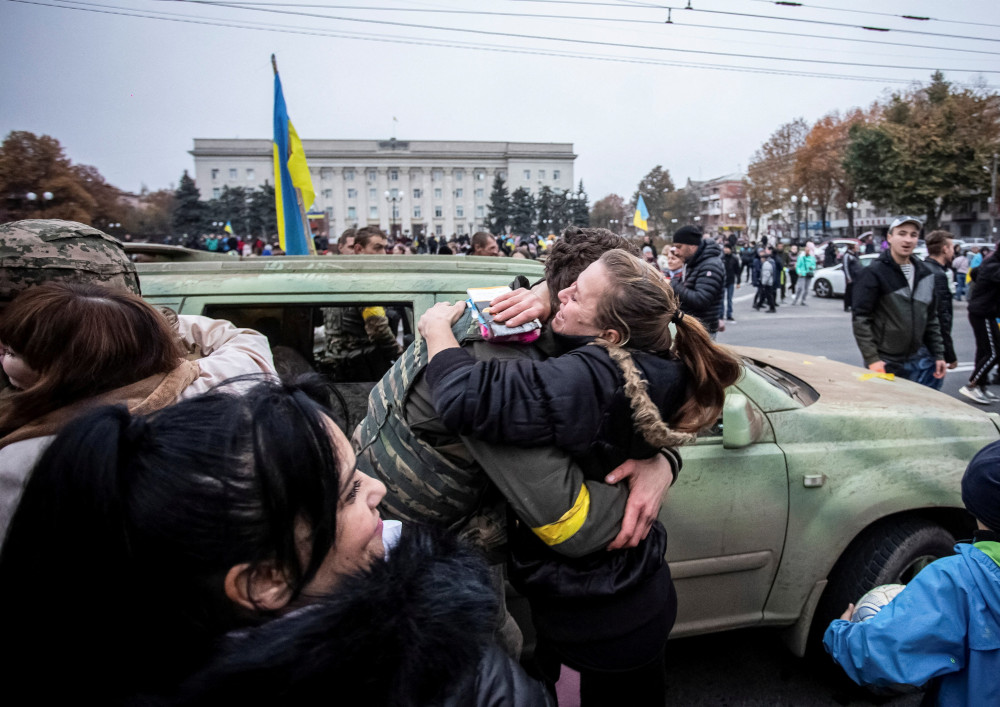 Nine months after Russia launched its war on Ukraine, Pope Francis wrote to the Ukrainian people expressing his admiration for their courage and commitment to their country in the face of so much death and destruction.

"In this sea of evil and sorrow -- 90 years after the terrible genocide of the Holodomor -- I am in awe of your good passion," the pope wrote in the letter Nov. 24, which was not only nine months after the war began, but also the eve of commemorations of the 90th anniversary of the Holodomor, a famine engineered by Soviet leader Josef Stalin that led to the deaths of millions of Ukrainians.

"Despite the immense tragedy they are suffering, the Ukrainian people have never been discouraged or given in to pity," the pope wrote. "The world has recognized a bold and strong people, a people that suffers and prays, mourns and struggles, resists and hopes: a noble and martyred people."

Francis assured Ukrainians that he prays for them constantly, calls attention to their plight publicly and continues to support humanitarian aid for them so they would know they are not alone and so that people around the world would continue to provide aid.

Ukrainian Archbishop Sviatoslav Shevchuk of Kyiv-Halych, who had met Francis Nov. 7 at the Vatican, said he was grateful for the letter, which was a response to his request that the pope make "a gesture of paternal concern that could reassure the Ukrainian people of the love and closeness of the church."

"While the highest representatives of the aggressor state deny the Ukrainian people their right to exist, their identity, their language and their church, the pope addresses this people, recognizes them and admires their resistance," the archbishop said.

In his letter, Francis acknowledged how the people had been living with the "sinister roar of explosions and the ominous sound of sirens" since Russia launched the war in late February and how many people, especially women and children, had been forced to flee.

"Your cities are pummeled by bombs as showers of missiles cause death, destruction and pain, hunger, thirst and cold," he said. "Alongside your great rivers flow rivers of blood and tears every day."

"I would like to join my tears to yours and tell you that there is not a day when I am not close to you and do not carry you in my heart and in my prayers," he said. "Your pain is my pain."

"In the cross of Jesus today I see you, you who suffer the terror unleashed by this aggression," he wrote. "Yes, the cross that tortured the Lord lives again in the tortures found on the corpses in the mass graves discovered in various cities, in those and so many other bloody images that have entered our souls, that make us cry out: 'Why? How can people treat other people this way?"

Francis, who has been in regular contact with the bishops of Ukraine and with the Ukrainian ambassador to the Holy See and has met Ukrainian government representatives and wives of Ukrainian soldiers, mentioned specific stories he has heard.

"First of all, those of the little ones: how many children killed, injured or orphaned, torn from their mothers," he wrote. "I weep with you for every little one who, because of this war, has lost his or her life, like Kira in Odessa, like Lisa in Vinnytsia and like hundreds of other children: in each one of them the whole of humanity is defeated."

Francis also mentioned the children who, according to news reports and humanitarian organizations, have been forcibly taken to Russia. The pope described them as having been "deported" and noted that with the deaths, deportations and displacement, "the pain of Ukrainian mothers is incalculable."

Turning to Ukrainian young adults, the pope said he knew that "to courageously defend your homeland, you had to put your hands to weapons instead of the dreams you had cultivated for the future."

Francis also praised the priests and religious who "have remained close to the people, bringing God's consolation and the solidarity of your brothers and sisters, creatively transforming community spaces and convents into shelters where you can offer hospitality, relief and food to those in difficult conditions."

Offering prayers for Ukraine's political leaders, the pope noted the heavy the burden they have of governing "in tragic times" and trying "to make far-sighted decisions for peace" and for the recovery of the country and its economy, especially when Russia had targeted so much of the country's infrastructure, particularly its power grid.

Francis said he knew the suffering could intensify as the winter cold sets in, but it also is the time of Advent and preparation for Christmas, celebrating the birth of Jesus, the prince of peace.

"May he fulfil the just expectations of your hearts, heal your wounds and give you his consolation," the pope said.