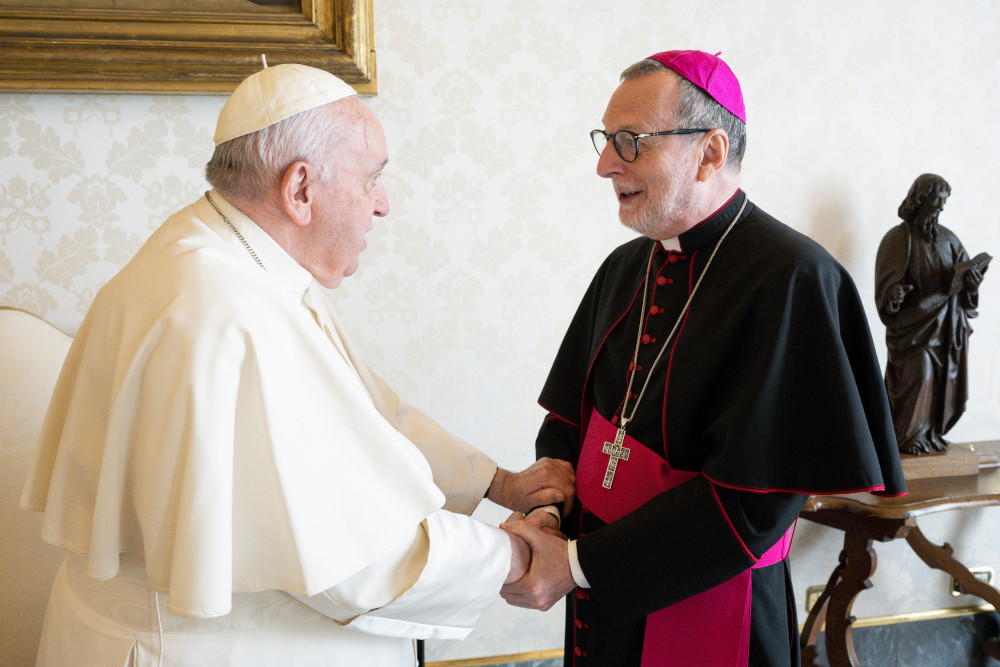 Pope Francis meets Archbishop Claudio Gugerotti in the library of the Apostolic Palace Oct. 7, 2022. Pope Francis named the archbishop prefect of the Dicastery for Eastern Churches Nov. 21. The archbishop had been the apostolic nuncio to Great Britain. (CNS photo/Vatican Media)

Pope Francis has chosen Archbishop Claudio Gugerotti, his ambassador to Great Britain, to be the new prefect of the Dicastery for Eastern Churches, a Vatican office where he had served as undersecretary until 2001.

Gugerotti, a 67-year-old native of Verona, Italy, will succeed Argentine Cardinal Leonardo Sandri, who celebrated his 79th birthday Nov. 19 and has been prefect since 2007.

In addition to having taught at the Pontifical Oriental Institute in Rome and serving on the staff of the former Congregation for Eastern Churches, Gugerotti has lived with and worked closely with Eastern Catholics and Orthodox leaders and faithful while ambassador to Armenia, Georgia and Azerbaijan from 2002 to 2011, ambassador to Belarus from 2011 to 2015, ambassador to Ukraine from 2015 to 2020 and ambassador to Great Britain for the past two years.

Bishop Kenneth Nowakowski of the Ukrainian Catholic Eparchy of the Holy Family, based in London, said that for him, Gugerotti's appointment is "bittersweet; he was appointed nuncio in Great Britain shortly after my own enthronement here, and his deep knowledge of our church in Ukraine meant that he was well informed about our eparchy and Ukrainian community in Great Britain, so I will miss him."

"On the other hand, because of his knowledge of our church both in Ukraine and abroad, his appointment as prefect is also very important," the bishop said. "I phoned His Excellency immediately when I learned the news and told him I will miss him here but also assured him of my prayers for him and offered him my heartfelt congratulations."

With degrees in Oriental languages and literature and in liturgy, the future prefect was ordained to the priesthood May 29, 1982, for the Diocese of Verona. He taught patristics at St. Zeno Theological Institute and Eastern theology and liturgy at the Institute for Ecumenical Studies, both in Verona, until 1985.

He began working at the then-Congregation for Eastern Churches in 1985 and was named undersecretary in 1997. In addition, he taught patristics and Armenian literature and language at the Oriental Institute.