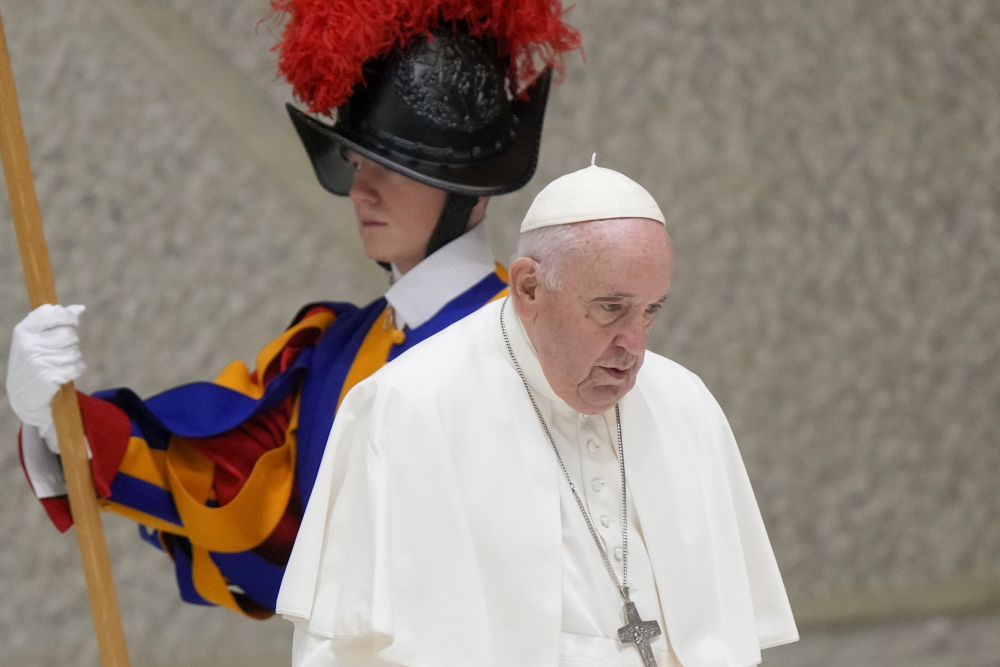 Pope Francis walks past a Vatican Swiss Guard as he arrives to meet with members of the Italian Schools for Peace Network in the Pope Paul VI hall at the Vatican, Monday, Nov. 28, 2022. (AP Photo/Andrew Medichini)

Russia has lodged a formal protest with the Vatican over Pope Francis’ latest condemnation of atrocities in Ukraine, in which the pontiff blamed most of the cruelty on Chechens and other minorities in an apparent effort to spare ethnic Russian troops from criticism.

The Kremlin's ambassador to the Holy See, Alexander Avdeev, told the RIA Novosti agency that he met Nov. 28 with a Vatican official to express his “indignation” about Francis’ comments, which were contained in an interview with the Jesuit magazine America that was published Nov. 28.

In his comments, Francis defended his usual reluctance to call out President Vladimir Putin by name, saying it was clear Ukraine is the “martyred” victim in the war. But he also said that, while it was the Russian state that invaded Ukraine, “Generally, the cruelest are perhaps those who are of Russia but are not of the Russian tradition, such as the Chechens, the Buryats and so on.”

The pope's apparent distinction between the mostly Muslim Chechens and Buddhist Buryats on the one hand, and ethnic Russian fighters on the other, irked Moscow.

“I expressed indignation at such insinuations and noted that nothing can shake the cohesion and unity of the multinational Russian people,” Avdeev was quoted as saying by RIA Novosti.

Throughout the nine-month war, Francis has tried to spare direct condemnation of Moscow for fear of antagonizing the Russian Orthodox Church, which has strongly backed Putin's invasion on religious grounds. Francis has previously blamed “mercenaries” for the atrocities being committed in Ukraine, drawing criticism from the Kyiv government.

In the new comments, Francis was clearly trying to draw a line between those who follow "the Russian tradition” and allegedly more brutal Chechens and Buryats, when in fact Russian troops have been accused of war crimes regardless of their ethnicity.

While it wasn’t entirely clear what Francis meant by people who follow the “Russian tradition,” it could be a reference to the predominantly Russian Orthodox Christian roots of an estimated 68% of the population.

The RIA report also cited the regional leader of Buryatia, Alexey Tsydenov, as describing the pope’s remarks as “at least strange.” Buryatia, a Siberian republic which forms part of Russia, is home to indigenous Buryat Mongolians, who were reported to be disproportionally targeted by Moscow’s mobilization efforts alongside other minorities.

Ramzan Kadyrov, the Kremlin-backed leader of predominantly Muslim Chechnya, has been one of the most outspoken supporters of Moscow’s invasion of Ukraine, though fighters from the southern Russian republic have participated on both sides in the war. Pro-Kyiv volunteers, for example, have named their grouping after a late leader who headed Chechnya’s drive for independence from Moscow.

The latest dustup over Francis’ comments come as the Holy See tries to play a mediating role in the conflict. Francis and the Vatican secretariat of state have made repeated offers to try to facilitate peace talks, to no avail.

Asked Nov. 28 about the latest offer, Kremlin spokesman Dmitry Peskov said Moscow appreciates the gesture but he noted that Ukraine has refused to hold talks.

The Vatican has a tradition of not taking sides in conflicts, believing it can be a more effective peacemaker with behind-the-scenes diplomacy. And Francis has tried to balance his rhetoric, expressing solidarity with the “martyred” people of Ukraine while also seemingly acknowledging Kremlin complaints about NATO “barking at its gates” by its eastward expansion.

The day after Russia's Feb. 24 invasion Francis made a very public gesture by going to the Russian embassy to the Holy See to personally appeal to Avdeev for peace.