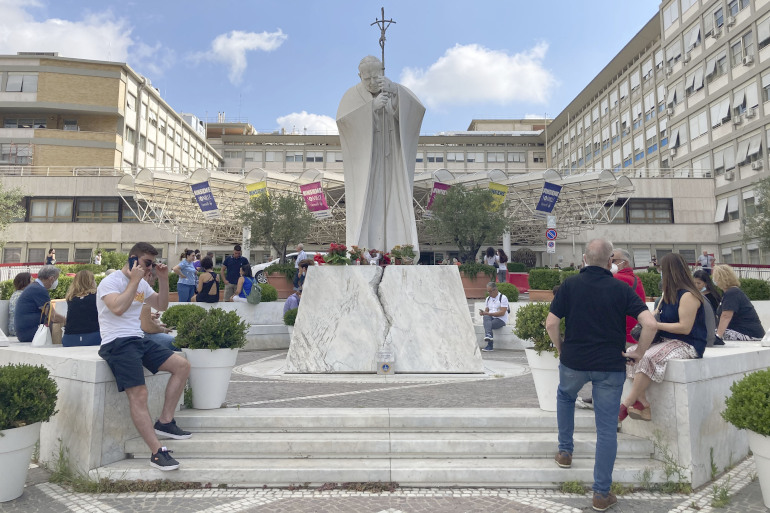 Pope Francis is walking, working and has celebrated Mass at a Rome hospital where he also will deliver his Sunday weekly blessing while recovering from intestinal surgery, the Vatican said July 9.

The Vatican’s daily medical update said that Francis' temperature was normal again following the slight fever he ran the evening of July 7. It said his treatment and recovery at Gemelli Polyclinic were proceeding as planned.

Francis, 84, had half of his colon removed on July 4 for what the Vatican said was a "severe" narrowing of his large intestine. He is expected to stay at Gemelli, which has a special suite reserved for popes, through the week, assuming there are no complications.

The statement said Francis would deliver his noontime Sunday blessing on July 11 from the 10th floor of the hospital, an appointment that will recall the practice of St. John Paul II, who also delivered the Angelus prayer and greeting from his suite during his occasional hospital stays.

During one stay in 1996, John Paul quipped that after so many visits, Gemelli had become the "Vatican No. 3," after St. Peter's and the papal summer estate in Castel Gandolfo.

Francis, for his part, was continuing to eat regularly and walk in the corridor, the Vatican said. It said he had resumed working, "alternating it with moments of reading texts."

He celebrated Mass in the papal private apartment on the afternoon of July 8, "attended by all those assisting him during his hospitalization," the Vatican said.

The Argentine pope has enjoyed relatively robust health, though he lost the upper part of one lung in his youth because of an infection. He also suffers from sciatica, or nerve pain, that makes him walk with a pronounced limp.