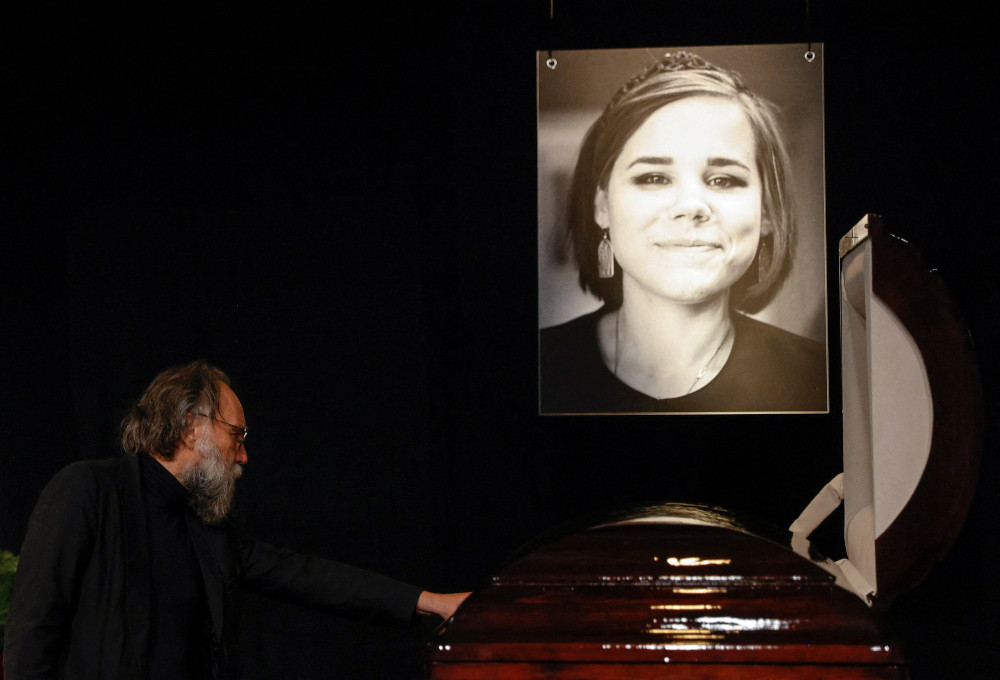 Russian political scientist and ideologue Alexander Dugin mourns for his daughter, Darya Dugina, who was killed in a car bomb attack, during a memorial service in Moscow Aug. 23, 2022. Pope Francis spoke of Dugina as an innocent victim of war, drawing a strong response from Ukrainian officials. On Aug. 30 the Vatican said the pope's comments "should be read as a voice raised in defense of human life and the values attached to it, and not as a stance on political positions." (CNS photo/Maxim Shemetov, Reuters)

Pope Francis' comments on the death of Darya Dugina, a 29-year-old commentator with a nationalist Russian TV channel, were meant to defend life and were not a political affirmation, the Vatican said.

"It must be reiterated that the Holy Father's words on this tragic issue should be read as a voice raised in defense of human life and the values attached to it, and not as a stance on political positions," the Vatican said in a statement published Aug. 30.

"As for the large-scale war in Ukraine initiated by the Russian Federation, Pope Francis' interventions are clear and unequivocal in condemning it as morally unjust, unacceptable, barbaric, senseless, repugnant and sacrilegious," the Vatican added.

The Vatican said the pope's numerous statements calling for an end to the war in Ukraine "are mostly aimed at inviting pastors and the faithful to prayer, and all people of good will to solidarity and efforts to rebuild peace."

Nevertheless, the Vatican said that although Francis' words are meant to promote peace, "public discussions have arisen about the political significance attached to such interventions."

At the end of his general audience talk in the Paul VI hall at the Vatican Aug. 24, Francis repeated his calls for peace and spoke of how so many people were affected by war.

As an example, the pope spoke of "that poor girl flown into the air because of a bomb under her car seat in Moscow. The innocent pay for war. The innocent."

While the pope did not identify the person by name, Vatican News confirmed the pope was referring to the Aug. 20 killing of Dugina. She served as press secretary for her father, Alexander Dugin -- an anti-communist, ultranationalist philosopher calling for Russia to reclaim its former territories.

In an Aug. 25 briefing, Kuleba told journalists that summoning a nuncio to the ministry was unprecedented.

"I will say frankly that the Ukrainian heart is torn by the pope's words. It was unfair," Kuleba added.

Andrii Yurash, Ukraine's ambassador to the Holy See, told Catholic News Service Aug. 30 that he was happy that the Vatican's statement was "not just a general statement" but "a concrete answer to a concrete question."

The statement, he added, was clear in saying that both countries are not equals in the conflict "because Ukraine is defending all of its territory and is doing everything possible to free already-occupied territories."

"I am really happy that the Holy See reacted on Ukraine's position" regarding the pope's comments, Yurash told CNS. "Surely, we will inform our government as quickly as possible (about the Vatican's statement), and I hope the government's reaction will also be very quick."

He also said that after the Vatican's affirmation of Russia's aggression, "nobody in the Holy See and around the world can have any doubts about who initiated this terrible war."

Yurash told CNS that although there are no updates regarding a possible papal visit to Kyiv, he hoped that after today's statement, those responsible of approving the visit "can make a positive and quick response."